Louise Stange was a BNF in early Star Trek fandom.

She was the president of a very early Star Trek fan club, Capsule 7. Later, she became the president of the Leonard Nimoy Association of Fans where she wrote many columns, was one of the official the go-betweens between fans and Leonard Nimoy, wrote for a number of other zines, and was an extra (along with David Gerrold and Bjo Trimble) on the set of the first Star Trek film. 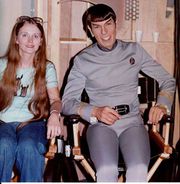 an undated photo of Louise and Spock -- "Here is a photo taken my last day to visit the set of ST:TMP…I was sitting in Leonard’s chair, and he was in De Kelley’s LOL….It was so awesome! The wall in back of us is the side of Capt. Kirk’s/Mr.Spock’s quarters which were interchangeable." [1]
In 1978, Louise Stange described her beginnings in fandom:

I began clubbing for Leonard Nimoy In September of 1966. I had seen Leonard Nimoy In television shows previous to STAR TREK, In particular, his guest appearance on THE OUTER LIMITS in the episode "I, Robot" which concerned the trial of a robot for supposedly 'murdering' its creator....Being a science-fiction fan, I was delighted to see that STAR TREK had been picked up by NBC in 1966---and when I saw Leonard Nimoy as Mr. Spock, I was not only intrigued by the character, but I knew that a VERY special actor had to portray such a phenomenal creation...and I located every article, photograph, and magazine that I could about Leonard Nimoy.

I knew I wanted to promote the career of Leonard Nimoy, and the best way I could think of was to start a club. Every week, several of my friends would come over to my house to watch STAR TREK since I was the only one among us who had a color television. I suggested that we have a club, and they thought it was a great idea. I contacted a local disc jockey, and he advertised the club on the radio. We called ourselves the Leonard Nimoy Capsule 7's. I was the President, and my friend, Barb Dixon, was Vice-President… We named the club's publication "The Crewman's Log." The first edition had 23 copies, which were given by hand or mailed to our members. In 1967, when Barb and I were in California for our summer vacation, we met Leonard Nimoy and visited the set of STAR TREK the television show… When I met Leonard Nimoy for the first time, I was overwhelmed...here was a uniquely gifted individual, and I intensified my activities to promote him. For every album Leonard Nimoy released, I did local record store promotions of his albums-—a different promotion In two different stores for each album in the form of posters on the walls which I had made, and flyers by the registers with more information on Leonard Nimoy. We had a very successful "mini-con" in the basement of a local church with about 50 members. The club's publication had grown in size with the club. Thanks to a listing in a national magazine, Capsule 7 had grown to over 350 members. In each issue, Leonard Nimoy the actor and artist was featured first, and Leonard Nimoy in STAR TREK second. This was (and is still) of the utmost importance. We had original columns and features (many of which are now in the LNAF Yearbook and include "And Now A Word From Our Sponsor," "Leonard Nimoy Network," "Starring Leonard Nimoy," etc.). During this time, a friend and I were able to fly up to Pheasant Run Playhouse in Chicago in 1968 to see Leonard Nimoy In the play VISIT TO A SMALL PLANET [2]---tbe first time I had ever seen him doing stage, another incredible dimension of Leonard Nimoy's talent!

In 1969, Peggye Vickers, who was the founder of the then Leonard Nimoy National Association of Fans, (of which I was very active in also), was resigning her position. Gloria Lillibridge, who was the Vice-President of the LNNAF was already running two very successful clubs of her own (Christopher Lee's and Jerry Lacy's), so she was unable to assume the leadership of the club. I was very thrilled and honored that Leonard Nimoy and Teresa Victor asked me if I would like to take the club. At time, the of the club was about 1700… now the LNAF (the name of was changed. to reflect the international scope of our membership), family has grown to almost 4000 worid-wide! [3]