From Fanlore
(Redirected from LNNAF)
Jump to: navigation, search

It formed after Vulcanian Enterprises and there were some tensions regarding access and power between these two groups. See below.

LNAF began as the "Leonard Nimoy National Association of Fans" or LNNAF. The name was changed in 1969 when several British and Canadian members and chapters joined up.

Smaller fan clubs could join as chapters of LNAF by following a few simple guidelines. The club's name had to include "Nimoy" or "Leonard Nimoy" somehow, and the club had to have UNICEF as their official charity. Chapter clubs included U.S.S. Spock, Spockness, Sam Cole's Nimoyan-Spock's Scribes, LNSTFCCF, and Regina Marvinny's Nimoyan Federation. In April 1967, there were apparently over 70 of these satellite clubs.[1]

It is unknown when this club ceased. A fan in June 1983 said:

Nimoy's fan club (LNAF) fizzled. I caught Louise Stange, who ran it, at Chicon, and asked about it. She said that L.N. is not interested in fan clubs. I don't know whether this means all such clubs, or just the one she ran. Does anyone else know about any others? [2]

The club gave The Nimoy Award to a fan honored for being the most active member of the LNNAF. [3]

At least one club, Vulcanian Enterprises, experienced conflict regarding power and access to Leonard Nimoy:

April [1967] had gotten us only to 47 members, and the LNNAF felt that starting to throw its weight around. Decision: let's be friendly until something definite develops. Loss of direct communication with LN develops from LNNAF interference." [4] ...At the meeting [in April 1967], the LNNAF was discussed and then voted upon. The result was that the club members ware not to join and fight against it. THIS IS HOW CHANGED.[sic] The past few weeks have brought enlightenment from several other fan clubs and "our leader". We were against becoming affiliated for several reasons: one person was controlling the whole information center and sending out pretty ridiculous bulletins (Mrs. Peggye Vickers), and the direct communication which we had enjoyed with L.N. was disrupted. Mrs. Vickers had a kind of dictatorship over the 70-odd clubs with no say towards our individuality. However, if I may coin a phrase, would you believe It was just organizing chaos just like that which "V.E." went through? Now direct comm. has been restored, with only strictly club material going to Peggye. Elyse and I have to join -- the only catch is that if we don't, no information will come to us. If any others wish to join, let one of us know. It is not necessary as all the info sent to us will be in the "Vulcanalia." The cost for joining is $2.00. [5]

Some clubs did not want to become LNAF chapters because they did not support UNICEF. Reports had circulated for years that a disproportionate amount of UNICEF funds went to Communist countries. Today, this would be like finding out that your official club charity was giving money to kids whose families were involved in al-Qaeda. Religious groups also objected to the "godless" UNICEF greeting card line, which omitted specific reference to Christianity or any other faith because these cards were going to people of many faiths.[6][7] [8] Others simply believed that UNICEF didn't adequately monitor the distribution of funds; or they just wanted to choose their own charities.

In 1972, Regina Marvinny pulled the Nimoyan Federation out of LNAF because of a disturbing (and verified) report that UNICEF officials were using funds to support lavish lifestyles, and that the food and medicine provided were inappropriate for malnourished children -- their digestive systems couldn't handle it.

The Nimoyan Federation changed its name to STREK and its charity to Save the Children. In 1975, the LNAF changed their official charity to the Cystic Fibrosis Foundation, after Nimoy's nephew Alan died from that disease: 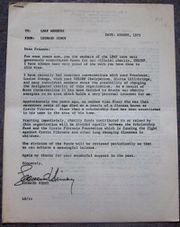 the August 1975 LNAF Bulletin, Leonard Nimoy's letter announcing the change in charity donations
From an August 1975 letter by Nimoy addressed to club members:

For some years now, you the members of the LNAF have very generously contributed funds for our official charity, UNICEF. I have always been very proud of the work you have done in this area.

I have recently had numerous conversations with your President, Louise Stange, with your UNICEF Chairperson, Gloria Lillibridge, and many individual members about the possibility of changing the designated charity of this organization. As a result of those conversations it has been decided to devote our charity energies to an area which holds a very personal interest for me.

Approximately two years ago, my nephew Alan Nimoy who was then seventeen years of age died as a result of a disease known as Cystic Fibrosis. Since then a scholarship fund has been established in his name in the area of his home.

Starting immediately, charity funds contributed to or raised by this organization will be divided equally between the Scholarship Fund and the Cystic Fibrosis Foundation...

The division of the funds will be reviewed periodically so that we can achieve a meaningful balance.

Again my thanks for your wonderful support in the past. [9]