You may be looking for the anthology Vulcania. 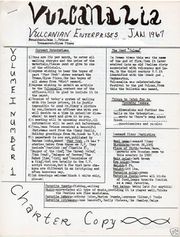 first page of the first issue

Now we are into ancient history! This is the earliest ST I have heard of Vulcanian Enterprises put it out as their club bulletin. It ran one or two pages usually. Memeod [sic] at first, I think, later it was dittoed. It had a few articles and some ST games and information on Nimoy and records of his public appearances. Due to small runs, I imagine that these will be probably become collectors' items in the field of Star Trek memorabilia. [1]

The editor of the zine Spockanalia writes:

In one of the past HC, you've spoken about reprinting the good ST stories so that new readers can get them. I, in my own way (she said modestly) am doing my bit... I have reprinted Spockanalia #2 and #4, and will be working on #1 as soon as my typer is overhauled. I feel we published some of the very best of the early ST fiction, and I hope that people will be interested in reading it. Now that I reread this, it sounds awful... awfully conceited. Ah well, we were the earliest fanzine, as opposed to clubzine -- THAT was VULCANALIA, and we DID publish some of the best damn work! [2]

Vulcanalia v.1 no.1 was published in January 1967 and it is a single sheet of paper, printed on both sides. 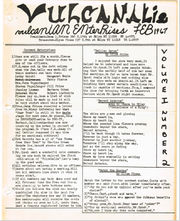 Vulcanalia v.1 no.2 was published in February 1967. It consists of a single sheet of paper, printed on both sides. 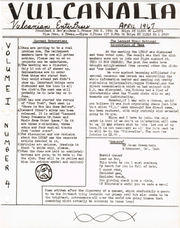 Vulcanalia v.1 no.4 was published in April 1967. It consists of a single sheet of paper, printed on both sides. 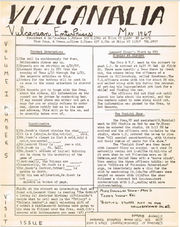 Vulcanalia v.1 no.5 was published in May 1967. It contains only one page of print. 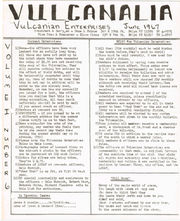 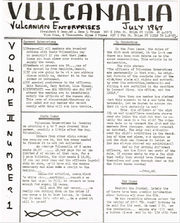 Vulcanalia v.2 no.1 was published in July 1967. It contains only one page of print. Membership in the club is now 59, and includes a Canadian member! 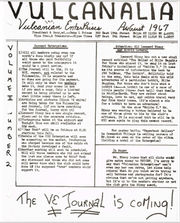 Vulcanalia v.2 no.2 was published in August 1967. It contains only one page of print. 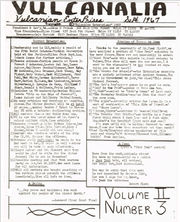 Vulcanalia v.2 no.3 was published in September 1967. It is three pages of print. Membership has skyrocketed to 112, mainly due to the club's presence at NyCon. 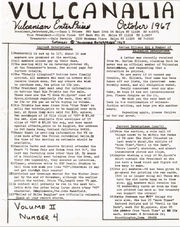 Vulcanalia v.2 no.4 was published in October 1967. It consists of a single sheet of paper, printed on one side. Club membership is 117. 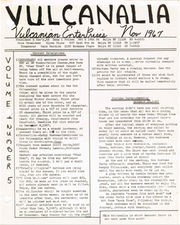 Vulcanalia v.2 no.5 was published in November 1967. It consists of a single sheet of paper, printed on both sides. Club membership is now 131. 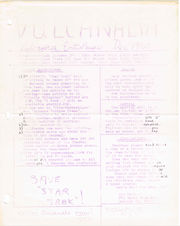 Vulcanalia v.2 no.6 was published in December 1967. It consists of a single sheet of paper, printed on one side. 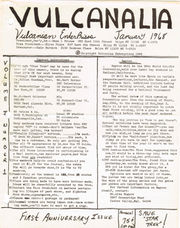 Vulcanalia v.3 no.1 was published in January 1968. It consists of a single sheet of paper, printed on both sides.

Here VE is now a rapidly growing club of 173 members, one year old. This comes as a great surprise to me, as a few times VE was floundering beyond belief. So, in answer to the requests for information about the history, I've thrown together a small epic.

Vulcanian Enterprises was formed at some Indefinite date in Dec 1966. The charter members numbered about 20, and the first Vulcanalia came out (Charter copy that all get).

February came in with 32 members, and the first dues-collection problems. VE sent a frantic note to LN for more pics and cards — we had used up our original 25.

March brought 46 members, and meeting disaster #1. The first stirrings of the LNNAF were heard about here, and dues were starting to cause panic at headquarters. LN had the officers call him up when he was in NYC.

April had gotten us only to 47 members, and the LNNAF was starting to throw its weight around. Decision: let's be friendly until something definite develops. Loss of direct communication with LN develops from LNNAF interference. LN's first album is released about this time.

May brought 49 members and LN to NYC for the memorial airport meeting and the Tonight Show episodes. Also realized was LN's reading of the Tolkien books — VE gave him the trilogy and the Reader.

June marched in with 52 members, and the VE rules (here re-stated).

July made us international, with 59 members and a Canadian included. Plans are made for small Summer Journal.

August came with 61 members. Batten down the hatch for Nycon!

Sept. brought the end of the Convention, 112 members, Mr. Spock's shirt, scripts, and hundreds of photos. Included in the membership now are Hal Clement and Isaac Asimov. "ST" comic book comes out.

October brings the Costume Party meeting and 117 members. Bjo Trimble is now heard from and there are plans for a Winter Journal.

December created the first drastic attempts  on our own duplicator, the notice of "ST'"s danger,  and brought 145 members.

2) Members delinquent in paying dues receive notices to that effect. Those owing 1.00 (4 months) or more, no longer receive the bulletin until they pay their dues. Then all issues missed through their delinquency are sent to them.

4) All members are expected to do all in their power to keep "Star Trek" on the air, and Leonard Nimoy as a powerful popularity figure.

5) Anyone may Join Vulcanian Enterprises, over age 12. Those under this age must show by either speech or writing that they are knowing enough to understand the bulletin,, journals, etc., as sometimes scientific articles are included.

6) Upon joining, all members receive a membership card, a Charter copy, a photo of Mr. Spock, and the bulletin of the month in which they joined.

7) Vulcanian Enterprises is a club formed for its members. The members are free to send in opinions, suggestions, articles, etc.,and are encouraged to do so. As the original formers of the club, the officers are in a permanent position, and can veto the previous items listed. However, they only will do so if it is either injurious to club or Leonard Nimoy, or it it could form a situation which would be either too difficult or too expensive for the club to handle. The officers do not have absolute power.

8) There will never be chapters formed of Vulcanian Enterprises, as this action widely separates the officers from all the members, slows down operation, and goes against the original purpose of the club.

9) If a member wishes to quit the club, he should write to the Pres. and state so. He must clear his record of dues delinquency, and then, will be taken off the membership list with no further ado. Rules are added and changed from time to time; the members will be kept notified. 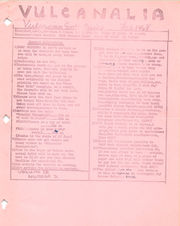 Vulcanalia v.3 no.2 was published in February 1968. It is three pages of print. Club membership is now 203. 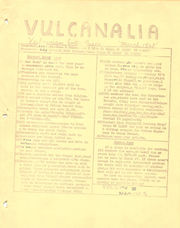 Vulcanalia v.3 no.4 was published in March 1968. It consists of a single sheet of paper, printed on both sides. Club membership is now 227, and may have a lead on a "possible member from Belgium."