Leonard Nimoy Presents Mr. Spock's Music from Outer Space is Leonard Nimoy's first LP. It was recorded in his Mr. Spock persona. It was released in June 1967 by Dot Records.

It was released while Star Trek: TOS was in its original run on television. 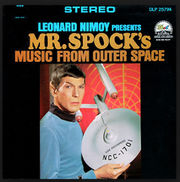 cover of the original 1967 release

A Cozy Relationship Between "Dot Records" and Fans

The producer of this album had a close relationship with fan club presidents and other fans.

In the April 1967 issue of Vulcanalia, the club president tells fans that they were given a head's up and access to Nimoy at an airport stop, as well as a personal promise to deal with any recalcitrant record stories if they did not get this album for fans:

Leonard Nimoy's Visit to NYC Meeting at Airport. The Pres and V.P. went to the airport to meet L.N.. He arrived at 6:28 PM Wed AA flight 26. There were exactly 4 fans there to greet him, the others being the officers of a branch in Wiiliamsburg, called Spockness. The V.E. officers spoke with him for about 25 min. and walked along with him during the process of getting his luggage (which got lost for a while) and finding the car. The officers did not find out until almost too late about his arrival... The information was phoned to the Press. by Dot Records....

Regarding procuring the album:

Dot Records got in touch with the Pres. about the albums. All information on the record can be gotten by contacting her. If any record store can either not get a copy for you or simply refuses to order one, please notify her as to [the store's] name and address. This will go to the co. and be promptly taken care of.

Sheet Music for Sale by an Enterprising Fan

Roberta Rogow sold sheet music for at least two of the songs. From a 1980 ad in Warped Space #44: "Caterpillar Music, 8 Yale St., Nutley, NJ, 07110 presents "You Are Not Alone" and "A Visit To A Sad Planet" sheet music of the songs recorded by Leonard Nimoy in the record album LEONARD NIMOY PRESENTS MR. SPOCK'S MUSIC FROM OUTER SPACE. $2 ppd. per song."

The album was re-released in the UK in 1973 on the Rediffusion label as Mr. Spock Presents Music From Outer Space. The tracks are identical, but it has different cover art and new liner notes.

The album was re-released October 10, 1995 by Varèse Sarabande Records, Inc. This reissue features side one (but not side two) of the LP Two Sides of Leonard Nimoy as a bonus to the original tracks.

In January of this year [1968] I sent Mr. Nimoy a copy of "The Territory of Rigel," explaining that it was a song text but that the music was yet to come.

"This leads to another point," I continued; "does Spock sing? which is to say: do you? If so, what range?"

"I doubt that Mr. Spock will ever sing," he wrote back, "but Leonard Nimoy has on occasion. The range is very low, there have been some inquiries about the possibility of recording, and I frankly have not yet decided what to do about it."

It must have been only shortly thereafter that he did decide, and arranged to record with Dot Records. An album called Leonard Nimoy Presents Mr. Spock's Music from Outer Space has been out for three or four months; a single, The Ballad of Bilbo Baggins is about to be released.

The five instrumental pieces in the album are among its weakest parts. The Mission Impossible theme and Music to Watch Space Girls By are purely fillers and add nothing to the record. The Star Trek theme — embellished with bongo drums, electric organ, and female voices going aaaaaaah -- is not much better. Beyond Antares (an instrumental setting of Lt. Uhura's song in "The Conscience of the King") is much easier to listen to, although it suffers from the same embellishments. I would have preferred to hear it sung, either by Mr. Nimoy or by Miss Nichelle Nichols. The fifth piece, Where No Man Has Gone Before Is a surprise: a competent arrangement of an interesting melodic line based on the few phrases (under "Space, the final frontier....") which lead from the teaser into the Star Trek theme. Why weren't they all as good as that?

Of the three songs in the album, two were taken from musical comedies. Where Is Love (From Oliver) is a beautiful song of its type: its tender melodic line is well suited to Mr. Nimoy's very gentle voice, and its lyrics are entirely appropriate to Spock. Mr. Nimoy selected the song for that reason. I consider it the best band on the record,

Lost in the Stars (from the musical of the same name), based on Alan Paton's Cry, the Beloved Country) the song of the man who feels God has forgotten him, is perhaps more suitable to the denizens of the Twentieth Century than to Spook. Though he may occasionally indulge in desperation, he never despairs. However, the song is again well written and beautifully sung.

The third piece, You Are Not Alone,was written for this album. It is a protest against the unpleasantness of mankind which is about to be directed against the inhabitants of other planets. The point is well taken, and both the writer and the singer are very sincere (Mr. Nimoy is one of the people over 30 whom you can trust.) I wish it had been written with a lighter hand; it has an unhappy streak of corn.

The three narrative pieces are reasonably authentic Spook. In Alien he describes himself with fair accuracy: "... so much like you, and yet so unalike... no feelings show in me. Perhaps I'm better off than you... but I pay a price to be from human feelings free. Perhaps in mo you see your destiny."

Mr. Nimoy narrates Visit to a Sad, Planet not partially but entirely in the character of Spock, with his level intonation and occasional pauses to check the suitability of a phrase. The material is an anti-war protest: Spock; visits a ruined civilization and the last survivor tells him how they had destroyed themselves. Asked tho name of his world, he says, "We called it Earth." (And so they undoubtedly did, in their language. Had you forgotten Spock's telepathy?) The tone is taken from You Are Not Alone (as are several of the melodic elements), but the treatment is more subtle.

The tongue-in-cheek Twinkle, Twinkle, Little Earth stretches the imagination a little, but only a little. We know, of course, that Spock doesn't drink. But there must be ways (short of viruses, spores, and the pon far) of getting him to lower his guard. I can imagine the delighted consternation in the Officers' Club, and Captain Kirk grinning into his bourbon on the rocks while his First Officer solemnly declares, "Twinkle, twinkle, little earth, how I wonder what you're worth. ... On Cestus Omicron Three , the all- time hit song is Earthdust... don't let the earth get in your eyes."

Mr. Nimoy is a true Russian bass: his voice has a dark, velvety sound and some wonderful low notes. He has a natural sense of what to do with a phrase, but he is not a trained singer. He tends to fade out at the end of a phrase, perhaps because of lack of breath. If ever he gets away from that 14-hour day (not likely, if NBC knows a good thing when it sees one), he should be able to correct this with a little study. Of the more common faults of untrained singers — harshness, nasality, pinched tone, or wobbling tremolo — he has none. There is a great warmth in his voice: a very tender and gentle sound, when the material permits it.

The Ballad of Bilbo Baggins had not been released at the time of this writing, but it was performed on July 27th on a truly abominable television program called Malibu U. Mr. Nimoy lounged on a rock and sang to a half dozen addled females who will not, I hope and trust, be part of the record itself.

Tho song could have been better or worse. Its melody was lifted, I should think, about 50-50 from Davy Crockett and The Purple People Eater . In its general tone it is no more astray than the Ballantine cover of The Hobbit. It is perhaps a bit more patronizing, but not unduly so — the sort of attitude one of tho Big Folk would have taken toward Bilbo's adventures.

The line describing Bilbo as "the greatest little hobbit of them all might be taken as a slur against Frodo, except that the rest of the song, speaking of Bilbo in the present tense, can clearly be dated between 2942 and 3018 Third Age (1342 and 1418 Shire-Reckoning). Indeed, the piece might well have been composed by one of the Men of Bree; and, since Mr. Nimoy is the only man I over laid eyes on who could play Strider, tho effect is quite pleasant and not at all out of tune with Tolkien's universe.

When I met Mr. Nimoy last December, he had not read The Lord of the Rings. Indeed, I believe he had never heard of it. When Karen Anderson met him this July, she got the impression that he had at least read The Hobbit and had loved it.

If Bilbo Baggins goes well, she told me, he intends to do a whole album of Tolkien songs. This would be a very good thing. He might, perhaps, do the Flanders and Swann settings of some of those songs. Certainly, Mr. Nimoy is capable of doing justice to much better material than Dot has given him so far. [1]