You may be looking for the Beauty and the Beast letterzine Chatterbox.

Chatter Boxes is a gen Star Trek: TOS newsletter for the LNNAF.

There were eleven issues, plus a Summer Journal.

In March/April 1969, it became LNAF Bulletin.

Some issues consisted of fan club news, some were mainly a letter from Nimoy, and there were at least two seasonal "journals."

There appear to have been at least three journals: two summer ones, and one winter one.

In the 10th issue of "Chatter Boxes," it was announced that the winter and summer journals would now be combined into one publication, a yearbook. 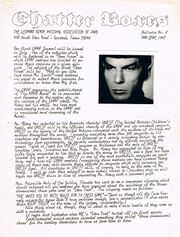 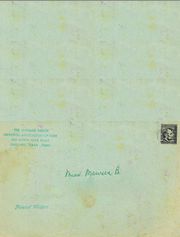 the back cover; it arrived in the mail folded in half with a 4 cent stamp

Chatter Boxes 2 was published in May/June 1967 and contains 7 pages.

The content is reports of Nimoy in the news, of books being published including one by James Blish, report of Nimoy and his wife's vacation and being swarmed by fans ("The stores were so mobbed with fans that he had to have protection; and fans who recognized him as he drove through the streets ran after his car. So goes a day in the life of our star!"), to support Nimoy's album Leonard Nimoy Presents Mr. Spock's Music from Outer Space ("Dot Records advises that the best way we fans can help deejays to play selections from the album is to ask by letter, for radio stations very often get annoyed by too may phone calls. So ------- write often!"), much about UNICEF,

By his request members of the fanclub were encouraged to write to NBC instead of to the fanclub to have their letters forward to Mr. Nimoy, and to write often. Because “NBC keeps track of the amount of mail he receives; and the more mail he receives, the more aware NBC is made of what a favorite person to the public Leonard Nimoy is!”

On the prospect of him appearing on the Pat Boone Show, members were appealed to to write in to specifically ask that they would have him on the show without his makeup.

The newsletter also related this story: “The Nimoys recently returned from a short vacation - having driven through Santa Barbera, Carmel, Monterey, and up to San Francisco. The stores were so mobbed with fans that he had to have protection; and fans who recognized him as he drove through the streets ran after the car. So goes a day in the life of our star!”

To help get Mr. Nimoy’s album Mr. Spock’s Music from Outer Space on the radiowaves fans were cautioned against calling radiostations on the phone, as they would get annoyed at that. Instead Dot Records recommended writing letters to the DJ’s asking they play selections from the album.

On April 20-22nd 1967 Mr. Nimoy appeared in many large stores in New York City to promote his album and on April 23rd he performed 4 shows that day “(singing etc.)” in Aqauam, Massachusetts at Riverside Park.

NBC reported that year that The Monkees series had broken all fanmail records and that Star Trek came in second place. [Then they still proceeded to cancel it. !!!??!!]

Blurb from the Dallas Times Herold: “Leonard Nimoy, who portrays the unemotional Mr. Spock in NBC-Ch 5’s Star Trek plans to unbent by preparing a nightclub act as a vocalist. Leonard not only has big ears, but, according to insiders, he also has good ears - for music. [1] 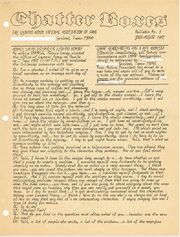 Chatter Boxes 3 was published in July/August 1967 and contains 11 pages. It can be see here.

Summer Journal was published summer of 1967 and contains 67 pages. It includes the first part of a four-part story called "In the Country of the Blind the One-Eyed Man is King" by Terry Hornsey.

Chatter Boxes 4 was published in September/October 1967 and contains 7 pages. 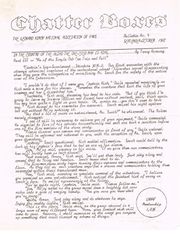 Chatter Boxes 5 was published in November/December 1967 and contains 9 pages. The club president says the fan club now has 1256 members. 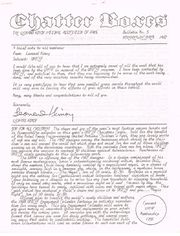 Winter Journal was published between issues #5 and #6. It has at least 21 pages.

Chatter Boxes 6 was published in January/February 1968 and contains 7 pages. 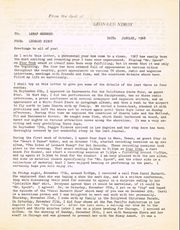 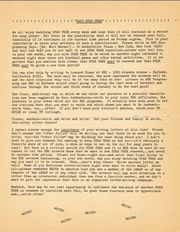 Save Star Trek letter from issue #6

Chatter Boxes 7 was published in March/April 1968 and contains 8 pages. 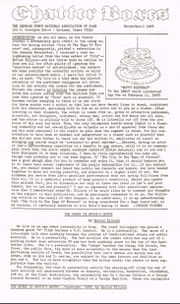 Chatter Boxes 8 was published in May/June 1968 and contains 7 pages. 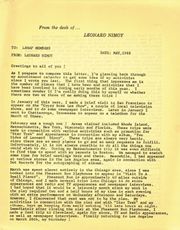 Summer Journal was published between issues #8 and #9.

Chatter Boxes 9 was published in July/August 1968 and contains 5 pages. 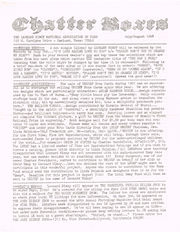 Chatter Boxes 10 was published in September/October 1968 and contains 10 pages. This issue was pretty light on content, and some of it previously printed in the previous issue.

Chatter Boxes 11 was published in Jan/Feb 1969 and contains 8 pages.