LNAF Bulletin is a gen Leonard Nimoy newsletter. They run about 8-12 pages a piece. It was preceded by Chatter Boxes. 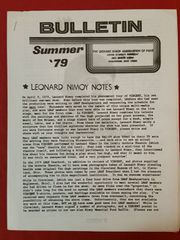 first page of the Summer 1979 issue

NOTE: It is possible that this is the same publication as Leonard Nimoy Notes.

The first Newsletter From Leonard Nimoy was sent out in January. In it he tells of his recording the new recent travels and activities—personal appearances, the Newsletter comes Dot album, and appearances on various TV shows. With another page, a P.S. from Peggye. This gives details on the new album, and other club news, and announces a new publications schedule. The schedule includes a printed annual journal which replaces the semi-annual mimeographed ones. Next publication, a bulletin in March. [1]

The March-April newsletter features an article by Harlan Ellison. That's right, Harlan Ellison. On the problems of the TV writer. "Watch the credits....And remember the names of the writers who have done their work well. Honor them. And when the writers have been bad, then condemn them." Newsletter also has a report on the Boston "Contact" TV appearance, written by a LNNAF contest winner; mentions of VOICE, F-UN Con, and Bjo's zines; and ads for items available. The club received a telegram from Leonard Nimoy with news of ST's official renewal. LNNAF is now a year old, and current membership is over 1700. [2]

The January publication is Leonard Nimoy's newsletter telling of his recent activities. I'd like to quote part of it here. He writes, "The production of Star Trek now enters a phase which is somewhat similar to that which occurred when our astronauts recently disappeared to the back side of the moon. Everyone sort of tenses up and waits until the reappearance takes place on the other side....Star Trek has been very good to me. It has given me the opportunity to play a marvelous character, and to expose my wares to millions of people. In a very special way, it has put me in a very real and personal touch with thousands of you wonder ful people. I am an incurable optimist. I have always believed that everything will turn out for the best. Whether or not Star Trek continues, we have had three very exciting seasons, and have come a long way together. The future, I am sure, holds new and exciting projects. I will continue recording, and when the opportunity presents itself, will be playing what I hope will be a variety of interesting and meaningful characters in other feature films or television projects....To all of you from Mr. Spock, a Vulcan salute, a hint of a smile, and 'Live Long and Prosper.' From Leonard Nimoy, a deep and heartfelt 'Thanks.'"

With the newsletter comes the Nimoy Award announcement, other club news, and a poem from a typical fan (Plak-Tow's editor). [3]

LNAF Bulletin was published in May/June 1969 and contains 6 pages.

Includes comments by Leonard Nimoy (who quotes Gene Roddenberry in a letter) on the final cancelation of the show:

Wherever I travel, it seems that Star Trek fans refuse to accept the fact that the show is over. I, too, some times wonder when or whether Star Trek could exist again. However, in all fairness to myself, and to those of you wonderful, loyal Star Trek fans in whose breast hope springs eternal, I must tell you this: the Star Trek sets have been disassembled, the stages are in use for other shows, the production personnel are at work on other series, and the actors, like myself, are now involved in other projects. It would be unrealistic of me, and unfair, to hold out any hope for the revitalization of the series.

In a recent conversation with Gene Roddenberry, he said: 'Perhaps five years from now the industry and the country will begin to talk about Star Trek in a loving remembered sense.' I agree with him. I think it will take some time for many people to be aware of what the series really was, and what it really meant to so many people.

LNAF Bulletin was published in Sep/Oct 1969 and contains 5 pages.

LNAF Bulletin was published in March/April 1970 and contains 14 pages.

LNAF Bulletin was published in Aug 1970 and contains 10 pages.

A last-minute note on a strip of paper stapled to the last page bore the information that Sandi Nimoy had suffered a miscarriage in Rome while the couple were on a European tour, and expressed condolences. Nimoy talked about this in his open letter at the beginning of the LNAF 1969-1970 Yearbook.