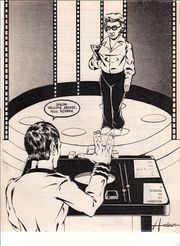 Ruth being welcomed aboard! Front cover of the tribute issue of T-Negative. Art by Bill Anderson

Her work also appeared in the commercially produced Star Trek: The New Voyages, see Visit to a Weird Planet Revisited .

In 1973, Ruth was nominated for the first John W. Campbell Award for the Best New Science Fiction Writer.

In 2004, she received the Minnesota Fantasy Award at the Fall 2004 Arcana, a convention of the Dark Fantastic.

She became active in fandom in the mid 1950s when she was a high school student...by the end of that decade, she was writing for fanzines, and had attended her first convention, the 1959 Detention. In 1960, as part of her....speech class at the University [High School] of Minnesota, she produced a one-act play of a Gordon Dickson story, '[Zeepsday.]' In the late 1950s, she and two other co-editors had published the fanzine "All Mimsy" under the pseudonym of 'George Karg'...in 1967, Ruth and her sister Jean started a fanzine they titled "Nous"; when Jean dropped out after the 4th issue in 1969, Ruth changed the title to "No", since it was now only 'half of us.'[1]

From her bio page:

Ruth was one of the founding members of The Rivendell Group. She was at our first meeting, back in December of '73 or so, along with David Lenander and Margaret Howes, and others who no longer attend. She was also a founding member of Minn-Stf, the local Minnesota Science Fiction Society, and lots of other activities and groups. This page serves primarily as an introduction to some of Ruth's activities (basically in the article below, and in the bibliography) and a linking place to the many files that she's contributed to these pages.

I became acquainted with Ruth Berman slightly over two years ago. She was publishing T-Negative, a very well written Star Trek fanzine in need of artwork to add some color to its pages. I was a fan-artist searching desperately for a fanzine to discover me. Miraculously, my illos found her fanzine.

Soon thereafter, I was startled to discover some very unusual aspects of Ruth's fan-publishing. Examining closely the publishing dates of her Trekzine, I discovered that she had published seven issues in the first year of its "bimonthly' existence. Now anyone who's been around fandom for any length of time knows that such a thing just isn't done in fandom. A fanzine claiming "bimonthly" publication is published quarterly at best, while a far more realistic figure is annually.

Had I known more about Ruth, I wouldn't have been as surprised, for I would've known that Ruth Berman had published nearly as many fan publications as the rest of Minn-Stf combined. The first issue of her fanzine, All Mimsy, was published before she discovered fandom itself. 23 issues of a genzine, Neolithic, soon followed.

As she became better acquainted with fandom, she applied her energies to an attempted revival of the Minneapolis Fantasy Society, and entered the fannish sport of sports, conhopping.

She was soon bitten by the APA bug, as she cranked out 19 issues of Pantopon for FAPA, 26 issues of Dinky Bird for SAPS, and 107 (whew!) issues of Roquat for Los Angeles fandom's weekly APA-L. Yes, Melvin, even six issues of Pooka for the Children's Fantasy APA.

She has had articles published in such diverse zines as Yandro, Cry, Spockanalia, Amra, Shangri L'Affaires, The Baker Street Journal, among others.

Ruth's fanac was not to be limited to any one fandom, though. Through the years, she has built up an excellent collection of OZ materials, and as founder of the Professor Challenger Society, she published half-a-dozen Sherlock Holmes fanzines.

Ruth developed an appreciation of NBC's STAR TREK series which, coupled with her fannish experiences, made her a valuable addition to the staff of Lincoln Enterprises, where she edited Inside Star Trek, the show's official newsletter. Later, she would continue her STrek fanac in her own fanzines, T-Negative, and the Star Trek Song-book; and as director of the "Karidian Light Opera and Piano Moving Company's" production of Filbert and Sullivan's space operetta, "H.M.S. TREK-A-STAR".

In recent years, her poems have been published in several literary magazines, including "Saturday Review," and she has had a story published in "Four Quarters." Another story, "Ptolemaic Hijack", appeared in "World of Fantasy" (Spring, 1971) while two other stories, "3-OK" and "Stretch of Time" have been accepted by the "Magazine of Fantasy and Science Fiction" and "Analog," respectively.[2]

From a 2013 private correspondence, Ruth herself wrote:

I have also had various science fiction and fantasy works published in many professional magazines and anthologies, and a novel, "Bradamant's Quest." My work also includes a lot of poems, and articles on fantasy and on children's fiction (and editing three books, "The Kerlan Awards," of the speeches by the recipients of the Kerlan Award in Children's Literature," "Sissajig and Other Surprises" a collection of writings by Ruth Plumly Thompson, who was L. Frank Baum's successor in writing the Oz books, and "Dear Poppa," a collection of the WWII family correspondence). I am not, however, the Ruth Berman (confusingly, also from Minnesota) who writes books on natural history for young readers, or the Ruth Berman in Israel who is a linguist. [3]

An extensive bibliography of Berman's creative and academic works is here. It does not include any mention of her fanworks.