L. Frank Baum's classic book, The Wonderful Wizard of Oz (1900), is the cornerstone and foundation of Oz fandom, but it's also only the gateway to a much larger and more complicated body of work encompassing books, films, and works in other media.

The original Oz series consists of fourteen books written by Baum and published between 1900 and 1919, beginning with The Wonderful Wizard of Oz and concluding with Glinda of Oz. After Baum's death, his publishers recruited a series of successors to continue the series, beginning with Ruth Plumly Thompson and The Royal Book of Oz. This process continued for several decades, and produced a group of works known among Oz fans as the Famous Forty[1]. The Famous Forty, however, included neither all of Baum's Ozian literary output nor the several novels set outside the borders of Oz but in lands literally adjacent to it beyond the borders of the Deadly Desert - some of these featuring characters also seen in mainstream Ozian canon.

Subsequent scholarship has established two further-extended lists comprising a more complete Ozian canon, the Sovereign Sixty and the Supreme Seventy-Five, plus a listing of "deuterocanonical" books. These include not only Baum's own outlying works, but additional works by Baum's early successors, by members of Baum's family, and by more recent authors of Ozian fiction, notably including Sherwood Smith. [2]

The relationship between literary Oz fandom and the famous 1939 motion picture The Wizard of Oz is complex. The film departs in several key respects from the book (replacing the book's "silver shoes" with "ruby slippers"; substituting "the Good Witch of the North", for Glinda the Good, ruler of the southern Quadling Country), and introduces an entirely new framing story, but the main plot and characterizations are generally faithful to the original novel. While the preponderance of Oz fanfiction adheres closely to the literary canon, the 1939 film has been the dominant (though by no means exclusive) influence on subsequent commercial adaptations.

Novels written or authorized by Baum's heirs or their representatives have included:

Although no other filmed adaptation has met with anything like the critical recognition or popular success of the 1939 movie, a number of adaptations of Baum's works have been produced for film and television (many in animated form). Next to the 1939 film, the best-known theatrical movie is probably Return to Oz (1985). Television features have included The Muppets' Wizard of Oz (2005) and Tin Man (2007). The newest major film adaptation is the Disney film Oz the Great and Powerful (2013), which acted as a prequel to the original 1939 film and references both the books and film.

Two other recent releases are the live-action Dorothy and the Witches of Oz (Europe 2011, UK/US 2012), initially released in Europe as a TV miniseries and later re-edited as a feature film, and the animated Legends of Oz: Dorothy's Return (2013) (loosely based on Roger S. Baum's book, Dorothy of Oz).

Artist and writer Eric Shanower, beginning in 1986, has created a series of original graphic novels set in Oz which have been widely praised and have helped draw new attention to Oz. Other comics projects related to Oz have included:

Successful stage adaptations of the Oz material have included The Wiz and Wicked, the latter based on (but significantly modified from) Gregory Maguire's novel.

In many respects, the development of organized Ozian fandom parallels that of fandom for Sherlock Holmes. As with Holmesian fandom, the early focus of fannish activity was on scholarship and analysis, with the production of new fictional works coming into prominence somewhat later. The pre-eminent organization of Oz fans, the International Wizard of Oz Club, is perhaps best known for its production of the journals Oziana and The Baum Bugle.

As with the real-world or offline fandom, the most visible focus of Internet Oz fandom is on scholarship and the creation of reference works or critical matter. Notable sites include: 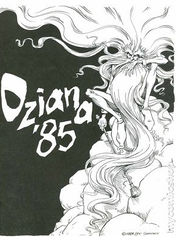 cover of Oziana, an Oz zine

Even the most cursory investigation reveals that an enormous amount of Oz fiction has been written and circulated in the decades since the appearance of the Famous Forty. What's harder to assess is just how much of this material should be considered fanfiction. As has been the case with Sherlock Holmes sequels, the great preponderance of apocryphal Oz material has been published in print form -- while online archives of Ozian fanfic exist, most are very small in size, whereas the busier Ozian presses have released dozens of titles apiece.

In theory, at least some of the publishers producing new Oz works may be intended to operate as commercial enterprises (legally possible given that a good deal of Oz canon is in the public domain). In practice, however, the world of the Ozian (very) small press arguably looks very much like classic-era printzine fandom, complete with BNFs and the occasional minor scandal.

Among the notable small or fan presses that produce or have produced new Oz works are:

Collections or archives of Oz fiction on the Web include: