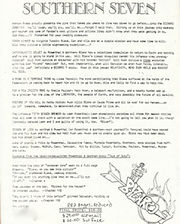 Southern Seven is a long-running gen Blake's 7 anthology of art, fiction, and poems.

The zine was well-received and quickly became popular not only for its content, but for its size (over 360 pages) and extensive art.

Original Home of The Bizarro Universe

This zine series is where the very popular Bizarro Universe stories began.

Original Home of The Hellhound Universe

This zine series is where the well-known and sometimes controversial series, The Hellhound Universe, began.

Later reprints of the zine did not include these stories as they were later reprinted elsewhere.

Click on the links below to see more information about individual issues of Southern Seven.

Paul Darrow's Awareness of This Publication

The editors of this zine, at least until 1989, wrote frequently of Paul Darrow's awareness of this zine, as well as of their personal contact with the actor. Wortham mentioned going to a play with Darrow and of consuming alcohol with Darrow; a cartoon by Celeste Hotaling in issue #3 refers to these things.

From a fan in #2: "["The Cynic Song"] opens up a whole realm of possibilities from the MAN OF LA MANCHA. "I Really Like Him" is nothing, if not a typical argument between Avon and Vila, and "What Do You Want Of Me" could easily be retitled "Avon's Lament". In fact, the whole musical would make a great BIZARRO 7 story." The editor responded: "Believe it or not, we once actually considered this: BLAKES 7: THE MUSICAL. Common sense prevailed for the moment."

The editor expands on this idea in #3: "I must confess that this was Paul Darrow's idea and he even wrote some music for it. It was inspired by a night out at PHANTOM OF THE OPERA in N.Y. Paul felt he could do a better musical. He and Janet decided it would open with Michael (as Vila, of course) floating onto the stage inside a giant plastic bubble. Mercifully, I got drunk shortly after that and don't remember much more of what Paul "composed" for the production. Maybe Leah remembers...? Paul also wrote a filk about Vila and Michael Praed. I'm not joking."

This ceased, at least in the positive sense, with the onslaught of The Blake's 7 Wars.

This zine series was involved in The Blake's 7 Wars as its two creators were major players in that fan controversy.

There are mentions of the tensions in the letters of comment, some fans pulled their art and stories from submission (and in the case of Leigh Arnold, after publication), and there was a two-year gap in publication between issues #5 and #6 due to these conflicts.

There was also a change in the copyright disclaimer due to the Wars, starting with the fifth issue.

... a nonprofit, amateur, limited distribution publication ©1987 by Ann Wortham. It is not the intention of this publication to infringe upon the copyrights of any television or film production from which these fannish works are derived. All rights revert to contributors upon publication. This zine may not be reproduced (art or stories) in any form without prior permission from the publisher and contributors involved. All original characters and situations in BIZARRO 7are ©1987 by Leah Rosenthal and Ann Wortham and may not be used without permission. All original characters and situations in THE LOG OF THE HELLHOUND are ©1987 by Katrina Snyder & Susanne McGhin and may not be used without permission.

...published and edited by Ann Wortham, Contents copyright ©1989. Rights to each contribution revert back to the writer or artist thereof. SOUTHERN SEVEN #5 is an amateur, non-commercial product which is not produced, approved of or in any way sponsored by the BBC; Lionheart; Terry Nation or any other holders of BLAKES 7 trademarks or copyrights, nor is SOUTHERN SEVEN #5 intended to infringe upon the rights of the aforementioned trademark or copyright holders. All contributions of art or written material accepted for use in SOUTHERN SEVEN #5 are in trade for one free copy of the zine.

Ah, this big door-stop (though actually the Enarrare' special Blake's 7 edition was a bigger door-stop) has so much in it and the editor actually edits, so there is usually something for everyone. [1]

I am relativly new to BLAKE fandom, though not fandom in general. Anyhow I have become obsessed with Blake, and I love it. And the zines!!! My last experience with zines was in the mid '70's and the STAR TREK zine novels, and the (gasp) first slash story. It's been a while. So when I sent off for the BLAKE zines I thought would interest me most, I only expected the same stuff you saw way back then. And all I can say is, BOY HAVE ZINES CHANGED! The mix of stuff you find is the same, but the quality is so improved. I realize this will cause controversy, but the level of writing is more nearly pro than I have ever seen before. And also the editing. NO more confusing sentences or weird punctuation. The art is better too. Anyhow, I was reading the LoC's in S7#4 and was dismayed at your statement, "I'm beginning to feel like it doesn't matter what I do or how hard I try or how good I try to make the zine, people just aren't going to be satisfied." Well you are wrong. This person is extremely satisfied. I have read a good many zines these past few months (as many as my poor budget would allow), and SOUTHERN SEVEN is by and far the best. Yes there are criticisms, but in a zine this size, it would seen to be unrealistic to expect to love every story, illo, poem, etc. that is contained between the covers. This ain't heaven, so don't go looking for perfection. My ration of 'A' stories in S7 is higher than any other zine. And I am less aware of the writing quality (that is the lack of quality), and more aware of the good stories. I like good writing, but if I notice the style more than the story, something is wrong.

Anyhow, I wanted to let you know there are people out there in the silent majority, who buy and read and like your zines. It would seem those who write are motivated by discontent. If you sell out within a month of printing or so, your zines must be very popular. That, more than a few LoC's should tell you how appreciated you are. [2]

Each issue was eagerly awaited and never disappointed. This zine introduced to fandom the amazing "Hellhound" saga, by Katrina Larkin and Susanne (McGhin) Katz—a complex vision of What Happened Next; so damned good that it makes me glad I'm a fan. [3]

Southern 7 was that {ahem} venerable thing, a print fanzine. One of a series of gen zines for Blakes 7 back in the days when the only way you got your fanfic was by paying for the zines and the postage, thank you very much, so you read whatever you were given (Trust me on this. When you pay like I did, including airfare, you read the lot, even the stories you didn't like. Then you either followed Dorothy Parker's suggestion*[4] and had both satisfaction and a dent in your all, or shredded the pages you hated, or... wrote a savage review/reaction fic that you read to the cat and then put away somewhere because really, no one got to read it anyway. Ahh, what the internet has taken away from us... :) [5]

I know what you mean about not liking some stories in a zine, but as an ex-editor I do think it's only fair to point out that in an anthology zine we tried to give a mixture of stories in the hope that everyone who bought the zine would really like at least one of them. We knew that, unfortunately, there was no guarantee that readers would like everything in the zine. With one-story zines we had to depend on potential buyers finding the blurb interesting.

Over the twenty-plus years that we put out zines - and we put out over 200 in that time - I can think of only one story we printed that nobody seemed to like - except my co-editor and me. It was a weird little tale with no real resolution (given the parameters, a resolution was impossible), and we both loved it.

But there was a time when someone wrote to us (anonymously) saying that we shouldn't edit anything, that we should print what we were sent, mistakes and all, 'because that was what the author had written'. Our reaction was 'Duh? WTF?' Well, that person is getting her wish now, with some of the mis-spelled [sic] and grammatically incorrect stuff that's being posted! And - if she's still in fandom - I hope she's happy about it! [6]