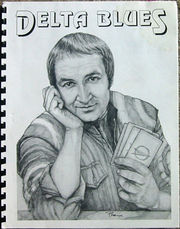 front cover by Phoenix: "Look at that face. That is an adorable Vila. He just bought you drinks (with the wallet he stole from you,) and is proceeding to charm the pants off of you to boot. You’ll wake up the next day missing all your valuables, and you won’t even care, because he’ll have stolen your heart as well." -- [1] 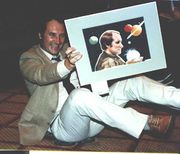 Vila Restal is character in Blake's 7. He was portrayed by Michael Keating and is the only character to appear in all episodes of the show (due to the absence of Kerr Avon in the pilot episode). Unapologetic coward and often the butt of jokes, Vila fans find him appealing because of his (often hidden) cleverness and resourcefulness and his sense of humour, often expressed through asides and pithy one-liners. Other B7 fans, focussing on his negative aspects, find him to be a lazy, sneaky, whining alcoholic. Many fans seem to be drawn to Vila also via his relationship with Kerr Avon whether in slash as Avon/Vila or in Gen, though appreciation of Vila on his own also exists.

Coward, hero, hapless victim, shrewd manipulator, master thief, master clown -- all these terms could be accurately applied to the character of Vila Restal, and examples could be found in the series to support each description. And that's what I have always found so fascinating about Vila. Like Blake and Avon, he's a complex puzzle.

We are fed little bits of information here and there about the character as the series progresses, beginning with his rather frightening first appearance in a transit cell in The Way Back ("I've had my head adjusted by some of the best in the business- it just won't stay adjusted"), through his manipulation of his crewmates in Star Drive, and right on up to his disarming behavior in Blake. While it might be difficult to reconcile all his actions throughout the series, it's a heckuva lot of fun trying. [2]

A professional thief, Vila is the first of the central cast that Roj Blake meets upon his imprisonment in 'The Way Back'. After briefly separated from Blake, Jenna and Avon, Vila ends up on the Liberator after being rescued from Cygnus Alpha by Roj Blake along with Olag Gan. A revolutionary mostly through lack of choice, he quickly becomes responsible for getting the crew into (and out of) anything that is locked and mans the weapons console, though he has an aversion to direct violence and is an unapologetic coward.

Later in the course of the show, he passes off an opportunity of a happily-ever-after to return to the crew, because he couldn't be a thief anymore:

VILA But there's nothing there worth stealing. No, listen. You know why I neutralize security systems, open safes, and break into vaults? It's because I can and most people can't. [...] It's just that, it's what makes me, me. Kerril, a thief isn't what I am, it's WHO I am. [4]

Sometimes played solely for comic relief (and suffering from somewhat inconsistent characterisation on this aspect), Vila also has moments of genius, particularly around locks. Fans have argued that some of Vila's apparent buffoonery (and drunkenness) is a facade, which is born out by several instances in the show that display his cleverness, such as when Vila pretends to be drunk to supply the crew with a solution to their problem in 'Stardrive':

VILA Not so, my lovely. I can be disgusting all the time. It's easy. Easy as colliding with an asteroid, eh, Avon? You know, they say all your life passes in front of you when you're about to, about to... y'know. It's what's happening to me now. All my past life....

AVON That's one misfortune we don't have to share.

VILA Fourteen I was when I was first sent to a penal colony. Ship was hit in the main drive by a meteoroid, bang! Y'know what they did to repair it? Activated the force wall and generated an atmosphere inside the force wall so the repair team could work in a vacuum without spacesuits, 'cause it wasn't a vacuum any more if you see what I mean. Very clever, those old prison hulk skippers.

SOOLIN Out of the mouths of drunks ...

Vila is shot on Gauda Prime during the events of 'Blake', though fans have speculated that he survives, as he seems to fall towards rather than away from the shot, making him a player in Post-Gauda Prime stories.

Vila's closest relationships with the regular cast in canon are those with Olag Gan (up until Gan's death) and Kerr Avon (though some fans have argued that their sometimes sharp-edged banter is a sign of mutual or particularly Avon's dislike; see Avon/Vila). He actively dislikes Del Tarrant, at least initially, though he later saves Tarrant's life, and has a brief, one-episode affair with single-appearance character Kerril (see Vila/Kerril).

Popular Vila-centric episodes have him as part of the Avon-Vila (or Avon/Vila) double act ('Killer', 'Gambit') or give him a spot in the limelight ('City at the Edge of the World') or are an unlimited source of angst ('Orbit'), which is the equivalent of 'Blake' for Vila fans.

Michael Keating continues to be heavily involved in the Blake's 7 (Big Finish Series), featuring in numerous audio plays (both full-cast and individual). The Big Finish universe also expands on Vila's personal background, introducing, through the course of a primary plotline of 'The Liberator Chronicles', Vila's estranged father.

Poor Vila, he was horribly underrated in the zine era. You’d think a fandom about an anti-facist revolutionary cell wouldn’t uncritically adopt a caste system like it was going out of fashion, but apparently not. I had this whole theory at one point about how he was the moral fulcrum of the show because everyone’s readiness to treat him like garbage is the human face of their total ineptitude as revolutionaries (their tendency to deconstruct the master’s dome using his tools, to use your phrasology) and how B/A PGPs that write him out therefore tend to collapse structurally because they’ve missed the whole point of the show. Except I don’t think the writers realized that was the point of the show, but then, that’s sort of the beauty of Blake’s 7, isn’t it? [6]

Vila continues to play a more minor role in online fandom, though he seemed at times more popular due to focusses on the Avon/Vila pairing, particularly on Tumblr. Though Vila is third to only Avon and Blake in characters tags for fics archived on AO3, he is a more minor character in many fics, particularly those that feature pairings that do not include Vila, such as Avon/Blake, if he appears at all. Nonetheless, among the fans of the character he is discussed to a depth that is rivalled only by Avon and Blake.

Fanon tends to emphasise either the clever or the buffoonish side of Vila, mirroring the inconsistent writing in the show. Most fans who give Vila a more active role, however, tend to portray him as more than the butt of the joke or a useless drunk, tending towards exploring the perceived complexities or towards emphasising either his emotional intelligence or his skill as a thief/cracksman.

Vila's background is cause of speculation among fans, as there is very little known about it from the canon. Typical tropes include explorations of Vila's previous criminal career or experience in juvenile detention, past trauma during previous imprisonment or while growing up Delta grade, or meeting crew characters before 'The Way Back' (primarily Kerr Avon, whom Vila introduces to the others, or Gan).

Some fans have taken Vila's hidden cleverness as indication that there is far more to the thief, even to the point of giving him a role as Federation plant, professional agent or even psychomanipulator. This is not to be mistaken for character bashing, as it is generally done out of appreciation of the character rather than to paint him in a bad light.

Alternatively, Vila also features in alternate universe AUs, such as in Renaissance, where he is transplanted to Renaissance-era Italy.

Vila's drinking and his other vices are either downplayed or exaggerated in fan works. Some works follow the example of 'Stardrive' in making Vila's vices more of a facade than real flaws. Other works seek to explain and/or justify his tendency to drink by various traumas (for instance, Vila is frequently drinking after the events of 'Orbit').

Others (frequently those less generous to Vila's character) use his drinking as a way to portray his character as useless to the rest of the crew or as cause for mistakes.

The episode 'Orbit', in which Avon threatens to kill Vila, has generated many stories dealing with the fallout. AUs seen Vila actually dying or flipping the tables and killing Avon. Typical story lines include: Vila disavowing himself from Avon, sometimes even leaving the crew; Vila reconciling himself with Avon or reaching an uneasy accord or failing to reconcile; Vila taking action prompted by 'Orbit' that do not involve leaving, such as telling other characters off the events or drowning his sorrows.

As Vila may have survived the shoot-out on Gauda Prime, he frequently features in PGP stories. In some, he is the sole survivor, in others, some or all of the crew survive alongside him. Some survival-Vila fics use the experience of Gauda Prime to have Vila shed his perceived foolish facade to become a more overtly assertive or independent character, sometimes to the point of Vila becoming a leader in the revolution (eg. Last Stand at the Edge of the World).

Vila is part of a number of pairings, but by far the most popular (also as it is second only to Blake/Avon in general fandom popularity) is Avon/Vila. Het pairings are less common with Vila, though they do exist, as well - of these, the most frequent seems to be Vila/Kerril, which has a canonical basis, followed by Vila/Soolin.

There are also some fics that pair Vila with original characters, both male and female.

Avon/Vila stories tend to emphasise either Vila's criminal skill or his cleverness in commonality with Avon or cast him as the innocent to Avon's darkness. While these stories are also often heavily concerned with Avon, many also feature explorations of Vila himself or Vila's narration. For a full discussion of the pairing, see Avon/Vila.

Sometimes, possibly due to Vila potentially knowing Avon before the events of 'Space Fall', they have a long-standing professional/romantic/friendly relationship or familial relationship.

Michael Keating also continues to be a popular guest as fan conventions, most recently during a virtual con in 2021.