Avon/Vila is one of the most popular ships in Blake's 7 fandom.,[1] pairing cynical computer genius and failed white-collar criminal Kerr Avon with the more lighthearted, work-shy Delta thief Vila Restal. As a result many fics featuring this pairing focus on the two committing crimes of various sorts and/or on the differences between their classes.

Avon and Vila in 'Gambit' by Bob Holmes
Where script-editor Chris Boucher seems to have been responsible for many of the biggest Blake/Avon moments and seems to have at-times almost supported that pairing, it is writer Bob Holmes who is responsible for much of the canonical basis for A/V. Three of Holmes's four B7 episodes focus on this team-up, including 'Gambit' (where Avon and Vila rob a casino together and Vila drapes himself around Avon) and 'Orbit' (an episode that spawned hundreds of fics attempting to deal with the traumatic events depicted). 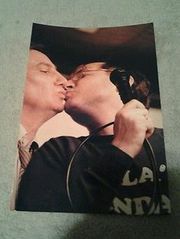 Convention photograph of Paul Darrow and Michael Keating
Paul Darrow reputedly described Avon's relationship with Vila rather derogatorily as "one man and his dog",[3] and was appalled at the idea of slash in his fandom (see, The Blake's 7 Wars). However, his own screenplay Man of Iron depicts Vila holding the rest of the crew at gunpoint when they refuse to save Avon (and in the end Avon almost thanks him for it) - almost more than Holmes had ever done. It also seems at least possible that his own easy relationship with Michael Keating (demonstrated at conventions) may have prompted some of the slashers to write as they did.

Avon/Vila was one of two juggernaut pairings in the early days of B7, only competing with Blake/Avon. It features in numerous zines, particularly those by Ashton Press, and was one of only three pairings (the others being Blake/Avon and Avon/Tarrant) to have its own single-pairing zines. Interestingly, its popularity seems to have suffered during the move to web-based fandom, with B/A and A/T seeming to dominate discussion on the fandom's slash lists, Space City and Freedom City, and later on Livejournal and Archive of our Own. Relatively few of the hundreds of A/V fics written have been archived on the web, leading to the impression that Avon/Vila is a more minor pairing than it is,[4] with one fan commenting: "My time on Livejournal had me convinced that not only was it not popular, but that the slash fans I did meet (B/A ones) were all convinced that A/V was somehow out of character/impossible... (But that B/A by those same standards somehow wasn't...)"[5]

Post Orbit is to A/V what Post Gauda Prime is to A/B: an almost unlimited source of angst as well as an episode that does help support the pairing (Holmes writes the two of them getting on well until the final choice). Typical fics show Avon trying to reconcile with Vila immediately after the event, with or without success; or (more rarely) use the event to separate the characters based on this misunderstanding until they can be reconciled later. As with Avon shooting Blake, Avon's attempt to kill Vila in this episode is sometimes explained away by madness, or mind control (at the hands of Servalan), or alternately it never happened at all because series 4 is a dream.

Post-Orbit fics are popular in gen zines as well as slash (see smarm).

In some fics Vila is outraged at Avon's behaviour, but in many he becomes terrified of Avon, leading to Sarah Thompson memorably describing the pairing as a gothic romance:

Now the classic prototype is the Gothic: a sweet little thing falls for a dangerous man, even though she knows he's bad news byany rational standard. By the fourth season, you've got the perfect Gothic hero-- sinister, smoldering, tormented by his dark past, and quite possibly crazy. But when you start looking for a suitably hapless, put-upon Gothic heroine, you run into problems.None of the women will do; they just don't cower properly. (A few writers have tried to force Cally into this part, but most don't see her as such a wimp. Besides, by the time Avon gets truly weird, she's out of the picture anyway.) There's really only one possible choice for the role of Gothic heroine, and it ain't a girl. A B7 Gothic romance has pretty much got to be Avon/Vila.[6]

Comarum, a fan on Tumblr, commented in 2016 in response to the quotation above:

I have heard several fans that have been in the fandom for a long time claim that they don’t like A/V because they perceive the relationship as inequal and “Vila deserves better”. This leads me to believe that they have mostly encountered the kind of dynamics you describe and maybe not so much of what I can’t help to think of as the more…modern interpretation XD Because what appeals to me in this relationship has very much to do with the equality of it. (See #Partners (In Crime) below).[7]

Although this scenario is especially associated with zine fandom, Livejournal/Tumblr/AO3 has also explored the theme.

Avon/Vila shippers do also make use of the Post Gauda Prime period, particularly as Avon is the only character likely to be alive at the end of the series, except perhaps for Vila who reputedly falls the wrong way based on the direction of the shot that 'kills him'.

The dynamic of the Avon/Vila relationship is different [to that of Avon/Blake], not a struggle for dominance between two powerful men; rather, it often enters around the need to resolve class inequalities before true intimacy can be achieved. In Hakucho’s ‘Just Say No’ (1990), Vila, the submissive Delta, cannot refuse Avon’s sexual attentions, having spent a lifetime being raped, threatened, and manipulated by powerful Alpha men who took what they wanted from. Avon must teach him to refuse attentions before either man can enjoy the sex shared between them. In Jane Carnall’s ‘Civilized Terror’ (1987) Avon accidentally sparks Vila’s memories of previous abuse when he approaches him with a belt in his hand as the two are undressing. … Not all fan stories paint Vila as a victim of sexual abuse; some allow Vila to challenge the repressiveness of Avon’s Alpha upbringing. Here, class imposes different modes of expressivity, different ways of loving. Vila as a Delta is portrayed as more in touch with his feelings, between able to communicate them, more tenuous and frequently less inhibited. Avon as an Alpha is shown as overly private, governed by logic, rather than emotion, preoccupied with work rather than pleasure and prudish about nudity and sexuality. … The conflict between them enters around what codes will govern their relationship … Here, Avon does not help Vila work through his fear; Vila helps Avon overcome his inhibitions.[9]

The same fan who commented above on the Gothic version of the pairing commented:

it seems to me that the fics that focus on the two of them as partners in crime or other (voluntary or involuntary) teamwork are often about how well these two seemingly different characters can - at best - complement and balance each other. Rather than trying to reconcile perceived differences or finding out how the characters need to change in order to make a relationship work it’s more about exploring why those differences may not be so difficult to reconcile at all, and that the key may not be to affect change as much as accept differences? ...

What appeals to me in this relationship has very much to do with the equality of it - more precisely the fascination with the equality between two very different characters! I think these types of fic are far less prone to treat Vila as a victim, and also far more likely to show Avon’s as a weaker character. And that they tend to argue that they are both of them better around the other - i.e. Avon being more relaxed and Vila being more confident when alone with each other than otherwise. Again: complement and balance.

Which doesn’t mean problem-free, of course. No-one into this pairing can forget that S4 happens. And that… sense of fragility is often a part of the trope I think. They may have the ability to balance each other but that also means that the greater the toll that events take on either of them, the greater the risk that the balance is going to tip.

[These are fics that] somewhat emphasises theirs as a relationship based on liking someone for, rather than despite, who they are.[10]

Blake, and Other Characters

As with Blake-Avon, there are a number of stories that are actually gen that depict the relationship between Avon and Vila strongly enough that they could be read as slash. Indeed Last Stand at the Edge of the World (by Ann Wortham and Leah Rosenthal is featured on Space City's list of best A/V stories without explanation. A fan writes in Communications Console:

Tanith Lee's Kill the Dead also depicts a very strong relationship between the two, although the relationship is familial rather than romantic.

The only A/V only zine series was Southern Comfort (aka Southern Lights) #.75, however A/V was featured heavily in several other multi-pairing and multi-fandom zines.