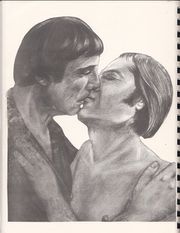 back cover by Adrian Morgan 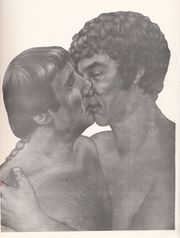 It has a gen sister zine called Destiny.

[Descent into Hell]: Re my non-attraction to Avon: Don't know really why I can't get into him. He's an arrogant prick but Doyle can be an arrogant prick as well. Avon gets on my nerves, which is the perverse reason why my favorite Avon story features him being raped and plundered by Servalan and her army of ferocious amazons. Yes, I know I'm sick.... [1]

[None So Blind, comment by its author]: On the subject of critting our own work: one of my own least favourite pieces is Westering Home. And the one I had in--was it Different Destinies? The one Brendan O'Cullane and Adrian Morgan put out a long time ago. [2]

Relatively early zine - from 1989. That sort of excuses some of it. Has quite a lot of art - most of which is pretty good, if sketchy. It's fairly evenly divided between B/A and A/V, although the fic is mostly A/V. I am running out of mostly A/B things to get, though. So.

M. Fae Glasgow, "There is None So Blind" (A/V) Towards the end of my DD-reading experience I started reading the A/V fic properly-ish, but I was initially just skimming. This fic posits a world where Gan is still alive after Pressure Point, but actually I didn't see Gan's presence having a massive effect on the crew. He talks to Avon at one point, and kidnaps him back to the ship. But that could have been anyone. I think there was a not very sympathetic portrait of Blake, which is fairly typical of A/V fics, although I know MFG also writes B/A.

Barbara Adams and Dani Lane, "The Ice Cream Letters" (A/Se, with implied B/J) This is silly, but I enjoyed it a lot, due in part to the 'pasted-in' photographs that accompanied the fic, which were v good and charming. The letters themselves are high crack with voices out of character and references to rebel 'conventions' etc, but it's funny enough that it's not annoying.

Ty Downs, "Habits" (A/V) Typical post-Orbit narrative where Vila is scared of Avon, but stays with him due to love (and fear). Eventually Avon realises the error of his ways. This is very much not my favourite genre.

Lou Rydd, "The Fruit of Knowledge" (A/C) Post Children of Auron. Cally initially resists Avon because he's not Aurorar (and she has no apparent interest in him!), but he presses his suit/gets naked, and she gives in and likes it. No actual rape, but the beginning is very close to it. I didn't like this fic.

Robin Goodfellow, "Between Madness and Desire" (A/B, with A/J and B/J) No indication of the latter two pairings in the key at the beginning, but this fic is practically a poly relationship between the three of them, although they sleep with each other in pairs. It has small flashes of stuff I like - such as Blake losing control when Servalan tells him what she's done to Avon, but basically it moves far too far away from anything I know or like about B7. Avon has a wasting illness and spends the entire fic in a chair and unable to feel his legs. The fic is about this. Avon is soft and gentle most of the time. It's really weird.

Catocala, "Crossing the Grade" (A/V) This one is genuinely good. Good dialogue, nice sex. Class issues obviously, but played in quite a fun way. Vila gives very much as good as he gets and they flirt over it, rather than it just being weird. For an A/V fic, it has a strange ending whereby we imply that A/B is also a thing... but I liked that too.

The PTL Club, "Moorbound, or, Withering Towers" (B/V, with other pairings implied) Pyschic planet recreates whatever you're thinking about - Blake is thinking about Gothic fiction, and really wants to bang Vila. I thought B/V would be fairly amusing/different, but B is so out of character for this fic that it's just weird.

Lou Rydd, "Descent Into Hell" (A/Se) In this PGP fic, Servalan rapes Avon literally on Blake's corpse while Vila watches and pretends to be dead. As it ends, Servalan's female guards are also preparing to rape Avon. I think you can decide whether you'd want to read it from that description... o_0 Rather strangely, it's paired with a sensual/relationshippy type image of A/Se.

Melissa Mastoris, "Nothing to Say" (A/C) I don't remember much about this one. It's post Sarcophagus, first time fic... Cally has never had anyone go down on her before. The sex is over really quickly.

Adrian Morgan and Brendan O'Cullane, "Human After All" (A/B) Very short fic that never really gets going. Rather unusually it takes place post-Killer - Avon is feeling sad because Tynus betrayed him and Anna is dead, so when Blake just steers him into a room and starts groping him he doesn't resist. They hardly talk. What's weird is that B then feels like the whole thing went too quickly and he should have said something - which is true! So I wonder whether this is actually quite an accurate representation of people. It would have been a lot better with some more dialogue and emotional involvement, though.

Kody A. Young, "Screaming in the Night" (A/B/V, with implied D/Ta) Also - if you want to talk about weird, let's talk about this fic. Forgive me if I describe the plot a little. It's PGP, and Avon and Tarrant are supposedly the only survivors. Avon doesn't want to be alone, so he reveals that he's a vampire and (consensually) vamps Tarrant. This is semi-sexual, but not actually. In fact, A is in a relationship with V, who is still alive and off somewhere with Blake and the girls. When they all reunite (after some vampire sire stuff that suggests this is influenced by BtVS), B reveals he is interested in Avon too... V welcomes him into their room, so the two of them can both lovingly comfort and have sex with A. The plot is bananas, and the emotional beats are all under-explained. It almost completely fails to work for me, but... there is something about it that is strangely likeable.

Ann Wortham and Leah Rosenthal, "Too Cute to Live" (A/V) Vila protects himself on the Orbit shuttle by saying a lot of pet names. It's short, and OK.

R. W. Grendel, "Spare Parts" (labelled A/C but it's implied at best. Actually - C/OC, V/J) Veeery weird story, which doesn't conform to most things I know fanfic to be. C and A are on a mission to a sort of telepathic cheetah planet. They want to blow up a base. One of the cheetah people rape Cally as part of her standard interrogation... but he hates himself for it. It's implied (maybe?) that Cally has slept with A, V and J and there's a really weird bit where the narrative says "Cally's time had only just past the day before, so she had been celibate for the last six days." As though if she hadnt' been on her period she'd be shagging people left, right and centre! Meanwhile there's some background story about sexually-abusing mutoids (one of whom happens to be the ex-lover of one of the other guards on the base) and this stuff works quite well! Then there's an absolutely inexplicable bit where Jenna is tense, so Vila gives her a backrub, which turns into anal sex! Avon and Cally cuddle a bit around the mission, but it's not an A/C fic in my book as this cuddling is barely romantic. As I say, the mutoid story works quite well. The cheetah people stuff... almost works. But as a whole... it is bewildering.

Allison, "Catharsis" (B/J) It's post PP and I guess is an AU of Trial. Blake is feeling sad because he killed Gan, Avon's being horrid to him (making it feel a lot like a B/A story tbh). He goes to see Jenna, tells her that he's struggling with impotence (again!) and sadness, but she helps him get over both. Then he's able to ignore Avon. I prefer Trial.

PWB, Avon and Vila are in the same prison, and coping with.... prison rape! And escape and stuff. Lots of stuff about class again, and some incredible Avon beauty. I stopped reading after a while, but it wasn't bad. If you like this sort of thing. [3]

Adrian Morgan and Brendan O'Cullane, "Human After All," Different Destinies #1. They write a properly sharp-tongued Avon. I also like the B/A parts of their "Something to Live For" in Oblaquest. [4]