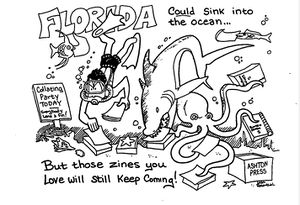 cartoon by Leah Rosenthal from a flyer for Southern Lights #5 -- "Florida could sink into the ocean but the zines you love will still keep coming!"

The press' owners were prominent in The Blake's 7 Wars and The Zine Piracy Letter Series of 1993.

In 1994, Wortham addressed some zine business and gave her support to Bill Hupe, a prominent zine agent:

It is my understanding that the new Horizon newsletter contains an article about problems ordering zines from me. I have not seen the article so I can't say how accurate it is, etc. I do understand the article encourages folks to order from Bill Hupe rather than me. I just want to publicly state that this is quite all right with me as Bill is a good friend of mine and has been wonderful to me the last several years while I have been going through hell in my personal life. Any of you who have ordered from me in years past, know that I always went out of my way to fill orders quickly (sometimes the day after receiving them), and always tried to keep everyone happy, especially my contributors, even if it meant bankrolling large print runs out of my own pocket until the sales caught up with the expenses. Unfortunately, my personal life and career the last couple of years have been such that I am no longer able to upfront the money for zines out of my own pocket (they must pay for themselves or copies do not get printed until they can) and I often can't spare the time to fill orders for weeks or months on end. I still love doing the zines though and don't want to stop. Bill has been a lifesaver to me during multiple crises ... [personal info snipped]... Last year Leah and I couldn't even make MediaWest, due to ... [personal info snipped]... and Bill and Peg Kennedy were so kind that they ran our dealer's table for us... I don't mean they just agented for us, they actually ran our separate dealer's table we had paid for. So, if any of you feel more comfortable ordering my zines from Bill, please feel free to do so. Only one thing to bear in mind is that Bill does not hold the reprint rights to any of my newer issues, although he does carry them to many conventions for me. For those of you in England, Bill will be agenting my stuff at the Who's 7 convention, although I'm don't know exactly which issues he's shipped over there. Also, Janet Ellicott carries my stuff through Bill. If you want anything in particular and don't want to get it through me, let Janet or Bill know and they will ask my permission to send it to you.

Please feel free to show this statement to anyone you care to.

A short while back I posted the notice to these lists that in the future I would no longer be filling mail orders for my own zines. Although I will continue to produce zines, Bill Hupe will handle the mail order and most convention sales. In the future, there will still be conventions where I sell my own merchandise, but I have already handed all FUTURE mail order sales over to Bill's hands. At the same time I announced this, I very clearly and explicitly stated that all pending orders were still in my hands. I also clearly stated that Bill Hupe was NOT responsible for those pending orders and that I had the stock myself and would be filling those orders as I was able. Since then, in a few isolated cases, I have asked Bill to fill partial orders for people when I have run out of the zines they ordered. In those cases, I have paid Bill to fill the orders (and I also wrote to the people involved and informed them that Bill would be sending part of their order).

Bill has received several letters recently from people insisting that [J P] told them Bill would fill their outstanding orders. In some cases, these letters have been less than kind toward *Bill*. I will say once again what I originally stated: Bill Hupe is NOT responsible for any outstanding orders unless I specifically have instructed him to fill a portion of it. If you write to Bill about an order you placed with me, you will accomplish *nothing*. You will annoy Bill and you will annoy me. Furthermore, if there are *any* questions regarding my zines, past, present or future, please ask the questions of me or Bill directly rather than a third party. [J P] is not a spokesperson for Ashton Press nor is anyone else.

[J P.'s response]: I said to Bill that some friends had a longstanding problem with Ashton Press zine orders dating back a very long time, and he said that he was willing to help these people out if they contacted him.

That's what he said.

When people have written to Annie time and again without so much as a letter in reply, let alone a zine, they tend to get a little despondent to say the least. I have spent a good portion of this last year explaining to friends that Annie has had genuine problems in real life which have made it very difficult for her to mail them the zines that they had already paid for. Thus, when I met Bill, I asked him if there was anything that he could do to help.

If Bill no longer remembers what he said at Visions, then that is unfortunate. Doubly unfortunate because it sounds as though I'm accusing him of lying and that is not my intent. I would far rather assume that anyone can forget something said in the middle of a busy convention... I've no desire to run Bill down because he is a nice man, a reliable dealer and he's a man I trust.[2]