You may be looking for Folie a Deux, a Sentinel story. 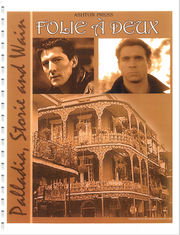 Folie A Deux & Parts Unknown. Two Highlander gen novels by Palladia, Storie & Wain published in one issue. It was the winner of a 2004 FanQ.

Versions of these stories have previously appeared on the Highlander Holyground Forum as part of the Mid-Week Challenges. 121 reduced print pages. Full color cover and back cover by Cat’s Meow Creative Arts. Beautiful interior art including two gorgeous drawings by Karen River.