You may be looking for Southern Lights. 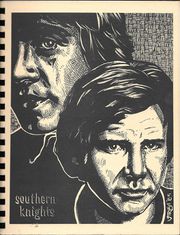 [Command Performance]: If you want to read a story that doesn't have Han and Leia settling down to a quiet life after the war, [Liz S.] has as story called "Command Performance" that has Han and Leia living an adventurous life as the secret heads of "The Department," flying off in the Falcon to fight crime in the galaxy. It's a wonderful story with GREAT characterizations of Han, Luke and Leia. [1]

Southern Knights 2. Originally published in May 1986 and contains 214 pages of reduced print. 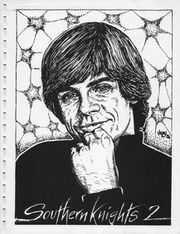 There were 200 copies printed. It has a front cover by Laura Virgil and a back cover by Mark Fisher. The other art is by Dani Lane, SMAP, Danalise Bryant, Katrina Snyder, Beverly Hale, Judith Low, Ronda Henderson, Mary Ann Dean and Jim Markle.

[zine]: In SOUTHERN KNIGHTS II, my favorite story was "Above All Shadows" by Carolyn Golledge, and my favorite poetry was the funny "Tatooine Trilogy" by Jacqueline Taero. I always enjoy Jacqueline's poems and the love and friendship that Luke, Han, and Leia have for one another is always evident in Carolyn's stories. (I wish you would be a little kinder to poor Han, though, Carolyn! The guy is always injured or sick in your stories!) I love the drawing by Laura Virgil of Luke Skywalker on the cover of Southern Knights II! It's very special! (Ann Wortham, if it is at all possible, please reconsider your decision to terminate SOUTHERN KNIGHTS after this issue! It would be sorely missed!) [3]

[zine]: Add my plea to yours entreating Ann Wortham to continue SOUTHERN KNIGHTS. Love Carolyn's stories, the only thing I could possibly say is that sometimes her Han is perhaps too understanding, not of his friends, but I think Han would not always be the too-forgiving type. [4]