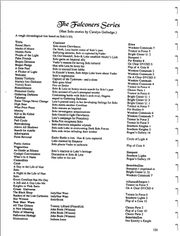 She was first published in the Star Wars zine A Tremor in the Force #2 in 1985 with the story Mindlink, and has since written over seventy stories and some novel-length fiction, mostly in Star Wars and later the Lord of the Rings fandom. In 1994, she sold three short stories to West End Games for their Star Wars role-playing materials.

In July of 1998, she became co-owner (with Ltlj) of the site the Corellian Embassy. The site was an internet archive of fanfiction that had previously been published in print fanzines, most of which hadn't been available since their publication in the 80s and 90s. Carolyn contacted fan writers who had published in the early fanzines of the 70s and 80s, and got their permission for their stories to be scanned and uploaded to the site. In June of 2006, The Corellian Embassy was adopted by Aquarius, editor of the Star Wars site This is Some Rescue. The site is now located here: The Corellian Embassy

She was also a participant in the web site the Less Than Legendary Journeys, which was a shared universe fanfiction site for Hercules: The Legendary Journeys and Young Hercules. The site hosted fanfiction by a group of writers (Helena Handbasket, Naomi Prince, Liz S., Ltlj, Fyresong, Mary Crawford, and various pseudonyms) who wrote stories that were all part of the same shared universe.

Under the name Solo Press, she is the editor of the Star Wars fanzines Bloodstripe (eight issues, 2000-2008), which is a multi-author fanzine, and Never Say Die (eight issues, 2000-2008), which is a reprint collection of Carolyn's Han Solo stories. She also edited the Lord of the Rings fanzines The Journey Home (a novel by Carolyn) and The Captain and the King (a single author collection written by Plastic Chevy). Her zines are known for being over 200-300 pages, with interior illustrations and color covers with original art by fan artists.

Prompted by Ethics and Etiquette: A Proposal for the Buying and Selling of Fanzines, Carolyn wrote in 1990: "Mary Urhausen's solution to the Cloning/Copying Wars was very pleasing, so single, it's brilliant! Why didn't any of us think of this before? So here goes: I hereby give all fans the permission to make themselves single, not for resale copies of any of my works for their own personal use. You're right, Mary, it is easy! Thanks!"

Information and images from her zines appear on Fanlore with her permission.