Bloodstripe is a gen Star Wars zine with an emphasis on stories with Han Solo as the main character.

Some of the art by Zawiah can be found here.[1]

Art appears on Fanlore with the publisher's permission.

Chockful of funny, romantic stories that will hold you spellbound to the very end, this zine contain tales in which after the Deathstar battle, Han and Leia have to figure a few things out about attraction, friendship, grief, celebration, love and the makings of a really great mint-ale flash; as the Hoth base prepares to evacuate, tensions run high between smugger and princess. Can Han find the right way to tell Leia that he must leave?; Han is severely injured when the Falcon crash lands and he and Leia are stranded, where they struggle with their developing love; and while on an undercover mission, Han and Leia must behave as a married couple -- will these two explosive personalities survive this?

The majority of this fiction was online at Corellian Embassy [2] 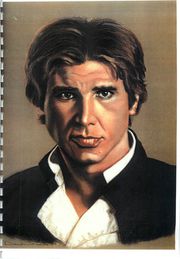 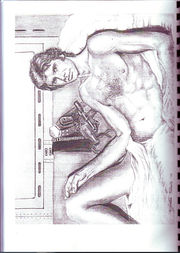 back cover of issue #1, Dianne Smith 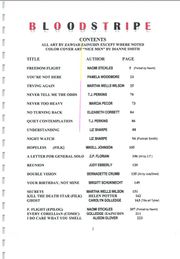 Bloodstripe 1 was published in May 2000 and has 250 pages focusing on the Star Wars character Han Solo with stories in chronological order of Han's life written by various authors. It was the 2001 FanQ Award winner for "Best Star Wars fanzine'. It includes stories by Alison Glover, Annette Stickles, Carolyn Golledge, Martha Wilson and many others. Lots of artwork throughout by Zawiah (a 2001 Fan Quality Award winner for best Star Wars artist), Smith, Judy Street, Naomi Stickles and others.

I have been way too remiss in thanking you for the excellent, professional WOW! job you did on Bloodstripe. This was only my second experience with Star Wars' print zines and it certainly won't be my last. Your service was immensely professional and prompt (and halfway round the world, to boot!). I have read it from cover to cover twice since receiving it and there isn't a poor one in the group. [Martha Wilson] stories are always wonderful (Trying Again was the best) and *in Ghost* poor Hagren is still getting it—I love your imagination. Although I thoroughly enjoy the Han/Leia interaction stories (sigh!), I've been a confirmed Luke fan since ESB, so Never T oo Heavy was absolutely delicious - outstanding! My sister who teases me unmercifully about my ongoing love affair with Star Wars, (but who has loved Han Solo in her dreams many times) saw Bloodstripe in my room and was immediately drawn to the cover. When I showed her the back cover I had to physically restrain her from ripping it off. She's asked for the back cover, laminated, for her birthday - she's not getting it. Anyway, I just wanted to let you know how very, very much I enjoy The Corellian Embassy and now your printzines. Looking forward eagerly to placing another order with you in the future. Most sincerely—keep up the phenomenal work! The Bloodstripe bookmark was a really cool touch! [3]

Just wanted to let you know that I LOVED Bloodstripe!!! (And it will always have a special place in my heart as my very first zine.):) All the stories were great. "Ghost," especially...! couldn't put it down. As someone else said on the OZ list, the red bookmark was nifty. (not to mention handy). And of course, the cover is absolutely yummy! (drool drool) What more can one ask for? Thanks for putting it together.[4]

I just wanted to drop a line to say that I loved "Bloodstripe!" It was very well done. I'm sure you've received countless messages just like this one, so just add it to the list! Thanks.[5]

I received the new 'zine. I've already sped through it and totally enjoyed it. Especially your new Hagren story. Thank you for not letting him do the nasty with Leia-I was cringing enough as it was! [6]

I just wanted to thank you so much for your wonderful zine and web site. I just received my copy of the zine, and I really enjoyed your writing/editing (the blood stripe/ribbon also was a nice touch). I wish so much that the spin-off pro fic would lend itself to the same kind of passion that you bring to the characters. You have a wonderful knack for capturing the charm, the ordinary and extraordinary moments in character relationships. I, for one, am a fan of yours! [7]

I have one word to say for this Zine. WOW! This was the first time I had ever purchased a Star W ars Zine. I could never have imagined spending more for a collection of fan-written stories than I would for a profic novel. However all of my money will now go into Zines, because yours was worth every cent. The artwork was excellent, especially the cover. I especially enjoyed the stories that delved into the mysterious background of Han Solo before the events of A New Hope. I imagine George himself could have given us nothing better. Your characterizations were perfect. I could actually see the scenes being played out in front of me. I also loved the way you tied all the stories together by having it all be told during Han and Leia's Honeymoon. I am looking forward anxiously to NSD2. My favorite story would have to be 'The Princess and the Nerfherder". Not only did we get to see pre-romance Han and Leia, but we witnessed Leia finding out that there is more to Han Solo than what she sees on the surface. The stories all blend together perfectly to make a most enjoyable reading experience. Thanks again for such a great zine! [8]

Ifs mind-blowing, heart-stopping, imagination-firing, traffic jam causing, and guaranteed to give me sweet dreams for the rest of my life. Oh - you wanted comments about more than the back cover? Are you sure? I can ramble poetically about it for a while /know. Onto the absolutely stunning front cover then... Well, if I must, onto the stories. Loved [Martha Wilson's] work. Completely. She's got my Han and Leia down to a fine art, covering the characters I know and love with some fantastic writing. It just feels like a scene from the movies that got cut, but with much better dialogue! Wouldn't mind a compilation zine of her stuff either (hint!).[9]

When I opened the package containing Bloodstripe 2,1 pulled it out of the envelope 'back cover up' and just about choked. (In a good way) Felt like I'd ordered a pom mag for half a second! What a picture, hey?! I actually felt embarrassed trying to read it while waiting in the school yard for my kids to come to the car :~P Diane Smith's work is stunning, although I liked the colour cover she did for "NSD" better. The pic she did on pg. 161 is excellent and the one on pg.93 is photographic! Zawiah's art was lovely as always, although some of them looked like they'd been 'squashed' on the computer, which was a bit of a shame, and the Voung Han' portrait by Naomi (on pg 215) I thought was very good (though squashed). Terrific likeness. I enjoyed all of the stories; cant pick a favorite, and lastly, I have to say I loved the red ribbon! I thought that idea was terrific! Looking foward to being a part of the next edition![10] 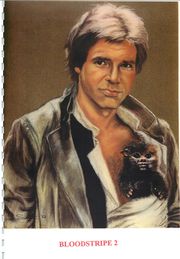 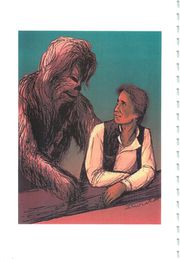 Bloodstripe 2 back cover by Zawiah, was used as a black and white image in issue #1 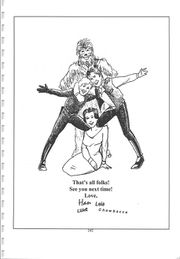 by Zawiah, "See you next time!"

Bloodstripe 2 was published in May 2001 and has 250 pages. It is the 2002 Fan Quality Award winner for Best Star Wars fanzine. Full color covers front and back by Dianne Smith and Zawiah Zainudin. All stories fully illustrated—artists include Kate, Zawiah, Annette and Dianne Smith. 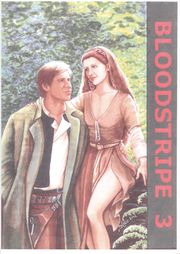 Bloodstripe 3 was published in 2002 has 250 pages with a full color front and back cover by Kate (Leela Starsky). Color inside back cover by Zawiah Zainudin. It was the 2003 FanQ Award winner for "Best Star Wars Gen fanzine'. 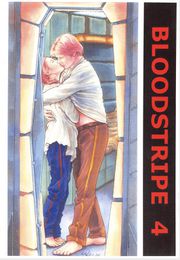 front cover of issue #4, Kate (a black and white rendition of this piece is interior art in issue #5) 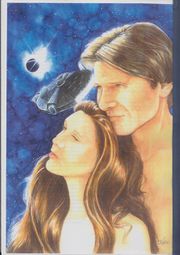 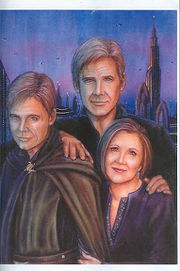 Bloodstripe 5 was published in 2004 and has 194 pages. Art by Wanda Lybarger, Leela Starsky, Lyn Skillings, Zawiah, Dianne Smith and Naomi.

Bloodstripe 6 was published in May 2005 and has 200 pages. Color covers by Smith and/or Kate. Illustrations by Zawiah. 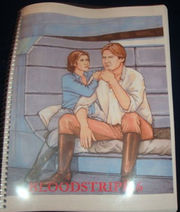 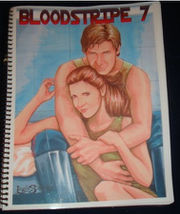 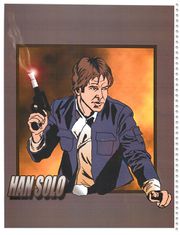 back cover of issue #8, Stephanie Swanger 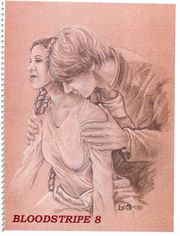