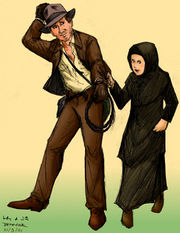 Samples of Zawiah's fan art has been included on Fanlore with her permission.

From her web gallery:

I love to draw and I love to read comics ever since I can remember. Then I met Harrison Ford. Onscreen, that is. It took 7 more years for the crush to settle in, and it never got out. I thought his character Indy Jones was a marvellous subject matter to practise drawing on. Still haven't stopped practising tho. It spreaded out to that other 'brother' Han Solo, and then to John Book, and Rick Deckard and whoever else that looks like Harrison...

In addition to illustrating fanzines and fan comics, Zawiah has also written fan fiction that can be found archived here. Some of her art can also be found illustrating stories in the charity fanzine series The Less Than Legendary Journeys here. The majority of her art was lost when FortuneCity shut down abruptly in 2012, although some has been captured here by the WayBack Machine. A single screencap of a Google image search of her site is below.

Her artwork in the zine Bloodstripe won her both a FanQ and a Star aWard. Some of her comics can also be found archived on her earlier fansite here

Zawiah wrote a filk song, One Fine Day Before Raya which is to be sung to the tune of 'Satu Hari Di Hari Raya' by M. Nasir. It describes the connection she felt with the character of Han Solo when she saw Star Wars for the first time as a child.

One fine day before Raya
Han Solo came over and said to me
He wanted to help make the cookies,
lemang, ketupats and rendang, ay!
I couldn't really believe my eyes!

One fine day before Raya
Han helped me weaving ketupat
But Chewie's hands got tied up
So strong, eh what?

One fine day before Raya
Han helped me cook the lemang
From morning until sundown
I was startled!
Could that lemang really go with the rendang

One fine day before Raya
Han Solo came over to help me
In the kitchen to bake cookies
But I said, "No thanks, I'll manage,
You please hang up the curtains instead!"

One fine day before Raya....