The Wookiee Commode was a gen Star Wars zine which contained stories by multiple authors. It had color covers and interior illustrations by various fan artists, and ran for seven issues.

From Southern Enclave #22: "There are a couple of things in your editorial that I wanted to comment on, Cheree. One thing was the problem—growing problem, unfortunately of zine "piracy." It seems more and more common among editors that have some issues behind them, especially issues that now are sold out. I won't name any offenders by name, but we have run into this situation with THE WOOKIEE COMMODE, too. Both our 3rd and 4th issues are sold out (and the 5th nearly is, as I write this), and I know: for a fact that there are unauthorized xeroxed copies out there. {For my solution to this situation, see my LoC in SE20.) In fandom, as in any human endeavor, there will always be a few bad apples and quick-buck artists; the responsibility lies with the zine-buying public. If no one would buy "black market xeroxes," they wouldn't exist."

From issue #24 of Southern Enclave #24: "Issues #3, #4, #5 are now officially out of print (OOP). In accordance with the terms of the Clone Wars Treaty, Double D Press hereby gives all fans permission to make themselves single, not for resale, xerox copies of these three issues for their own personal use. Double D Press will not be printing any of them. [1]

From Zine Scene v.2 n.1: "Sorry, issues three, four, five, and seven are sold out! All fans have permission to make single, not-for-resale Xerox copies of these four issues only! For those have to get xeroxed copies, or any interested party, I have some copies of the color covers of issues 4, 5, 7 available. They are free for the asking -- if you send me a 9x12 manila envelope with correct postage (2 ounces -- 54 cents)."

Regarding a Planned Last Issue

I apologize to everyone who had written to me recently inquiring about WC#8 and hasn't received a reply from me yet. I have been trying to hold off writing to people until I had a more concrete report to give. Well, this is about as concrete as it's gonna get! Currently, WC#8 is not in production. I am not saying it will never go into production; I am just saying that we are not working on it at this time. That's right — there will not be a new issue of WC out for MediaWest this year [the first time that's happened since 1984]. Quite frankly, we do not have enough good material to put out an issue at this time. That's not to say that we don't have any good material; or that we have some good material and a lot of bad material. We just don't have enough good material to justify the work.... Finally, yes, we are still accepting sub- missions for WC#8; but please realize that all submissions are accepted conditionally, since the future of the zine is still very much up in the air. This is probably one of those rare cases where the writers seem to have burnt out before the zine eds did! [2] 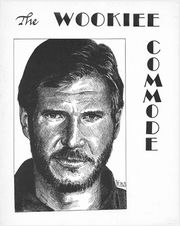 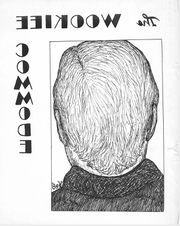 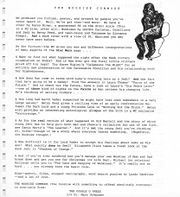 The Wookiee Commode 1 was published in 1984 and is 128 pages long. Nominee for a FanQ Award. Fiction, articles and poetry by Ripley, Peed, Thomas, Martz, Rogan, Saye and others. Art by River, Peed, Fregni, Carleton and others. Cover by Karen River.

First issues are never easy, particularly if you're putting out a SW zine. SW fandom is dominated by fat, super-expensive, annual zines that look almost professional. The editors of TWC must therefore be lauded for daring to put out a zine under 200 pages, and with less than perfect repro. The biggest problem with the qraphics in the zine is that pages show thru on the other side too clearly. However, it is nice to see a zine with nary a typo to be noted. The contents are mostly lightweight, meant for an easy summer afternoon's reading. Some tongue-in-cheek poetry, cartoons, "The Care and Keeping of Wookiees" by Michael Halloran are an example of this. Some serious poetry is also offered, such as Betsy Peed's "The Secret of the Jedi" (a powerful and mystical piece) and "Once" by the same author (a very affecting and poignant summary of one Jedi Knight's struggles.) Sharon Saye has a "Future Options for Fannish Writers," which posits some excellent ideas for SW fanfic. The point seems to be to get us all out of the non-creative doldrums that fanfic appears to be stuck in (tho certainly not all of it.) Probably the most interesting thing in the zine is Betsy Peed's "Horrorscope," an astrological analysis of Lord Vader's personality written by an astrologer to the Emperor. Creative, well-written, and engrossing, it shows a strong understanding of the complexities of a creature known as Darth Vader. A couple of Han pieces by Laura Thomas which delve into Han's life as Leia's husband are a bit unsatisfying and depthless. Elizabeth Cisco's "Shadows of Change" has an excellent idea, about Vader's seeking the advice of a Jedi spirit in an ancient ritual to try to understand why he was unable to convince Luke to join him (in TESB). The answers he gets don't make the Dark Lord very happy. Betsy Peed's "Nothing But the Truth" is an all too short piece that has Vader visiting the Organa household and encountering the fiery teenage Leia. Karen Ripley's "Celebrate the Night" offers a refreshing and welcomed view of the "Han-the-galactic-stud/Leia-the-royal-cvirgin" caricature. I admit I loved this story just because of the surprise ending, but the rest of it is presented subtly enough to enjoy for its own value. The longest piece is by Samira Martz, entitled "The Learner, or "Ord Mantell -- A Nice Place to Visit, But..." Unfortunately, this story is a difficult read because it offers yet another SW Mary-Sue type: a 15-year old girl Jedi, student of Luke's, whose parents were killed by the Empire, whose father was a Jedi, loved as a younger sister by Han, loved by Chewie, saves the day, etc., etc. Even her name—Jeni Petersen—bears the mark of the MS cliche. (Oh, Ben talks to her, too.) The story simply doesn't succeed. It is oversentimental, gushy, repetitive, overdone in almost all respects. Everyone speaks in slangy dialogue {'somethin*," 'nothin'," "an") and the scenes with Han and Jeni are forced and unconvincing. With tighter editing, it could have succeeded at least as a good adventure story, but the overwhelming attempts to make the reader care and feel fall flat. Ultimately, you just don't feel like continuing. I Were this zine priced under $10, I would say take a look at it if your pocket feels generous, and if you feel like supporting two obviously sincere editors, but at $12.50, I hesitate. There are some nice moments herein, but I have to balance out the contents' worth against the reader's pocket. Here, the latter must win out. [3]

Excerpts from "From Star Wars to Jedi, the Fanzine Way":

The real attraction of fans to the SW universe has always been George Lucas' characters. Each has his, or her, proponents, but, by far, the favorite character in all of fan fiction is Han Solo. Over the course of eight years he has gone from being the red-neck trucker of the skyways to a responsive general in the Alliance. In fan literature he has had an exceedingly varied career. After SW , fans accepted him pretty much as presented: a charming, sexy smuggler with a hidden heart of gold. But after TESB, fans saw him in a different light. He has been depicted as everything from the "other" to a prince. He has been Darth Vader's son and his brother, Luke Skywalker's uncle and even his father; Leia Organa's childhood rescuer and her murderer. He has been beaten, tortured, wounded, killed, maimed, blinded and drugged. He has fan-created sisters, mothers, father, brothers, grandparents and children. Women of every race and occupation have been involved with him [. . . ] One of the advantages Han Solo presents to writers is his lack of a past. [ . . . ] Even his alleged heritage as a Corellian is nowhere verified in the movies. He can be anyone. What more could a fan writer want?

Leia Organa is the one character who has had more than her share of detractors. In some fanzines she is pictured as cold, manipulative, and heartless. Leia in reality is a very complicated character who changes throughout the saga while staying essentially the same. She is loyal, dedicated, understanding, committed and intelligent, but she is often depicted as one-dimensional and selfish. Even in the best of stories, "Life-Line" by Anne Elizabeth Zeek (Kessel Run 4), for example, Leia emerges as the most dangerous of the series stars. In this story she would slag the Rurlizar Prison where Luke is held in order to prevent his revealing Alliance secrets to Vader. Later, only Han prevents her from murdering eight unconscious prison guards. Leia's pragmatism and relentless loyalty to the Rebellion earn her an eternal revenge in Zeek's sequel, "Blood Line"(Kessel Run 4). One zine, Against the Sith, was extremely anti-Leia, in an analysis of the virtues of each of the SW characters, Leia ranked just above Darth Vader.

[A Debt Paid]: Read "A Debt Paid" the other night in WOOKIEE COMMODE the other night. Great story. A little too many "ingly" words, but not to worry, nothing was spoiled. I got the zine a while back, but why I didn't read your story then, is beyond me now. If anyone has not read this story, by all means do. It fills in the gray area at the beginning of ROTJ, [in] regards [to] Han Solo. [4] 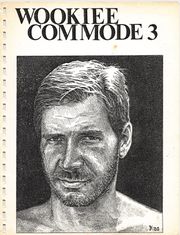 See reactions and reviews for Requiem. 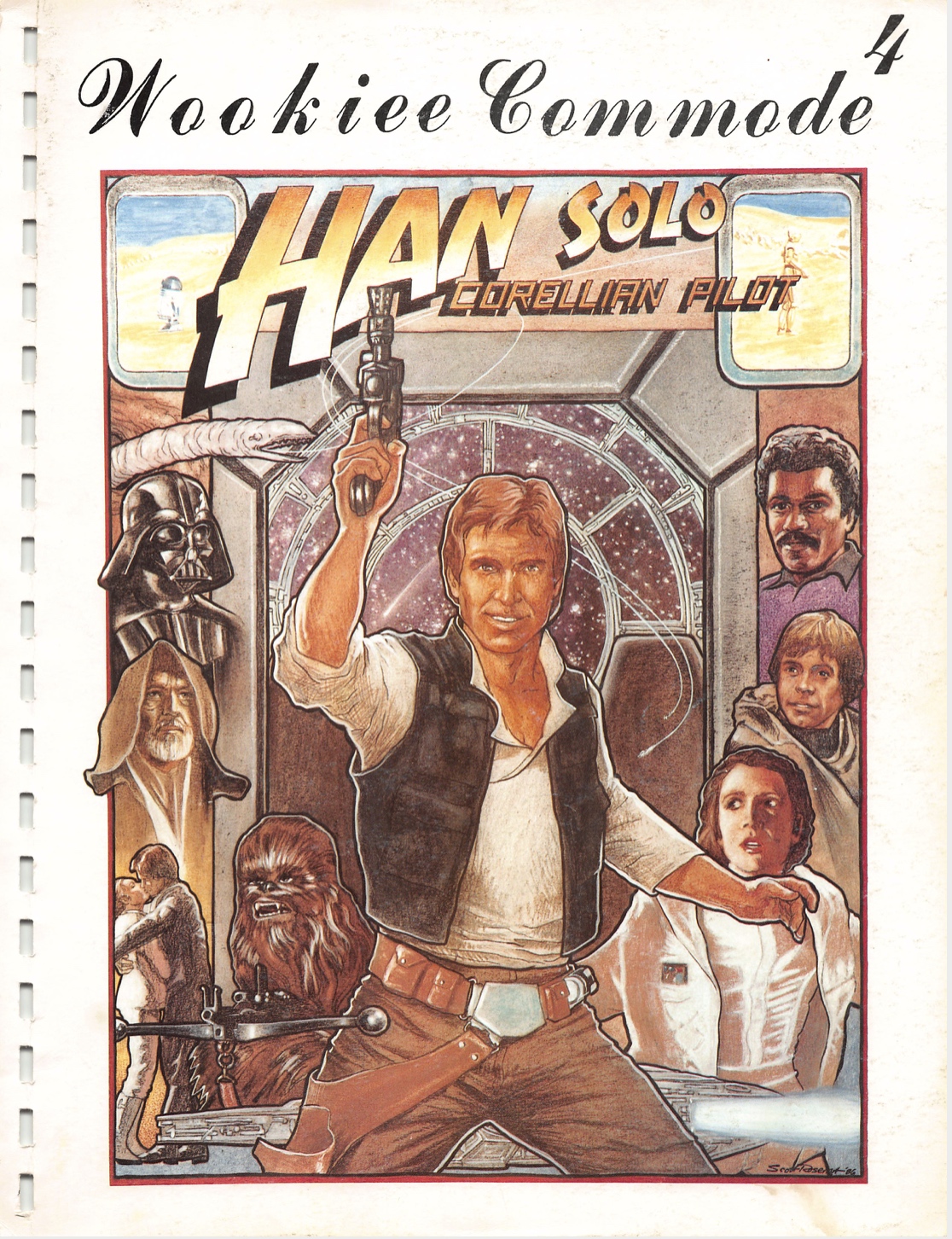 From the publisher's flyer in Southern Enclave #19: "We have a color cover, inside and out, sure to quicken the pulse of any Star Wars fans-and the ability to raise Luke fans from the dead!" 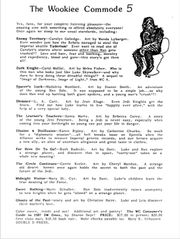 flyer for issue #5, contains a story that does not appear in the zine: "For Here Or To Go?—Ruth Radecki. Art by Dani. Luke and Han explore a strange planet, and discover that in space, "carry-out" takes on a whole new meaning!"

[Shimmer]: Cute story I've read lately which proved to be an unexpected, pleasant surprise was "Sumner" by L. A. Carr. All Luke fans should read this one! It's a sweet, touching story with a surprise ending that, despite the fact that I considered it a bit too cross-universe, was written so deftly that I smiled. This story is one of the few I've read that gave me that same uplifted feeling first felt at the end of ANH. [5] 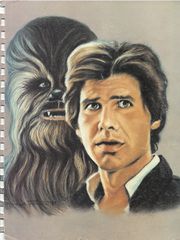 Z. P. Florian's "Galactic Enquirer" is very funny (a clone war prequel) but also very clever with her unique creation Hoth Industries". "Dark Odyssey", Part I by Carol Moffatt.. A really fine post ROTJ story pitting the Dark One (you know who isn't dead, after all) against our heroes... a nicely done Jedi Academy and apparent time twist. "Union and Reunion" by Karen Ripley. The infamous (some would say insufferable) KR wraps up her Virgin Prince" universe, post ROTJ serial. Clever ideas, good characterizations and funny and lyrical writing (and yours truly did the illos for it). [6] 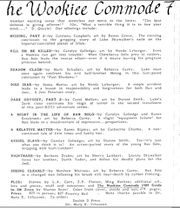 flyer printed in Below the Surface #3 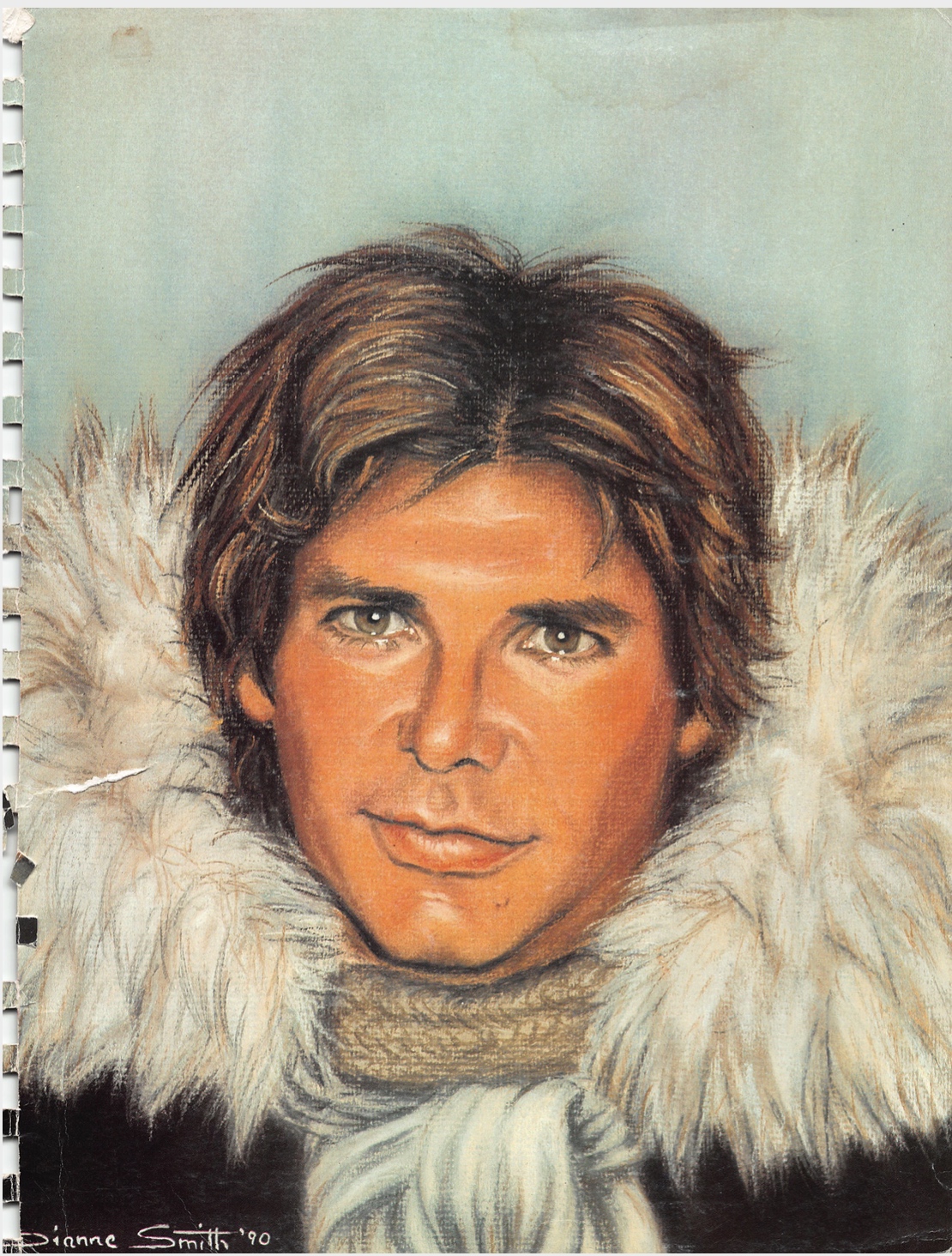 The Wookiee Commode 7 was published in 1989 and contains 274 pages.