Dragon's Teeth 1 was published in 1986 and is a 363 page long perfect bound novel by Carol Hines-Stroede with emphasis on Darth Vader's character. The cover and art is by Nancy Stasulis. It was edited by Joyce Yasner and Devra Michele Langsam. 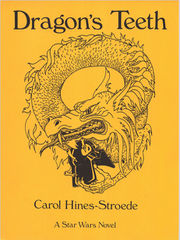 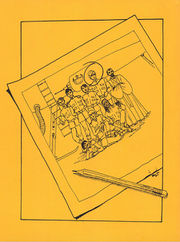 Summary: Ben Kenobi takes on a new student - Anakin Skywalker -who has the greatest Force potential Ben has ever seen.

So, speaking of philosophy and religion, has anyone else felt that the novel, DRAGON'S TEETH, was curious in its attitude toward R&P? I enjoyed DT: Hines-Stroede is a fine writer who can keep me reading no matter that her PoV and mine are apparently quite different regarding Life, the Universe and Everything. No problem there: lots of people don't necessarily agree with my SW universe, but I'm grateful to them for reading THOUSANDWORLDS anyway. However, DT's lack of any acknowledgement of metaphysics astonished me in a SW story concerning Jedi. If I had been asked, I would have said that SW Jedi without metaphysics was impossible. This opinion may, naturally, just reflect my own spiritual leanings ("Zen Jedi" Susan Foxwyf calls it). And, of course, the Saga is presented from the PoV of people who interpret the existence of the Force as a call to philosophy. In DT, the Force is just a tool that comes more readily to the hand of talented persons than to the general population, and the Jedi are presented as not only "human" but quite '80's-style venal. But I'm curious to know if anyone else had this reaction. [1]

I gave it thirteen hours of non-stop, undivided attention. I couldn't put it down until I reached the last page. Wonderful! [2]

Carol Hines-Stroede focuses her Star Wars novel on Anakin Skywalker and his fall to the Dark Side. It follows Anakin's introduction to Obi-Wan Kenobi, his friendship with another Jedi, Tansen Harethi, and his love for a'Republican physician, Midori Koliko. As he works his way through the Jedi ranks, Anakin's future is put in jeopardy when he crashes his Delta, and ends up in the care of a Force Master with infinite ambitions and the need for a Dark Side servant. Caught between his love for Midori and his jealousy, his anger at Kenobi, his own ambitions, and the manipulations of an evil Force-user, he makes decisions that affect everyone's fate.

Dragon's Teeth portrays a very complicated social, economic, and political structure, coupled with well-realized characterizations. Kenobi is not a saint; he makes mistakes. Anakin is not a victim or master of his own fate; his destiny is the result of his own free will, and the manipulat ions of others. Carol's depiction of Vader is especially compelling, as she captures both that curious attractiveness and the heartless ruthlessness. In brief, although a difficult reading experience (don't skip pages here, readers, you might miss something vital), it is rewarding. [3]

Dragon's Teeth 2 was published in 2006 and contains 200 pages. It contains fiction by Carol Hines-Stroede.