Flip of a Coin

Flip of a Coin is a Harrison Ford zine, which included fan fiction from Star Wars, the Indiana Jones movies, and other films starring Ford. It is primarily gen, but also includes adult het stories and began after a similar zine, Facets, ended.

Its editor, Paula Truelove, also started the fan club The Royal Order of the Rebel Forces in 1977. 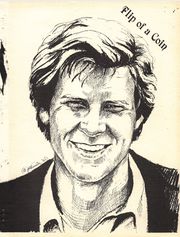 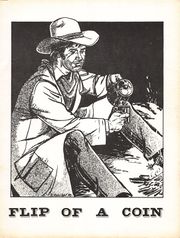 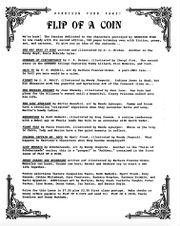 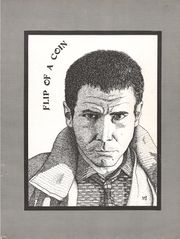 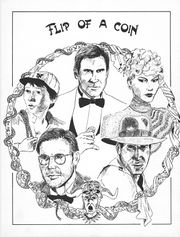 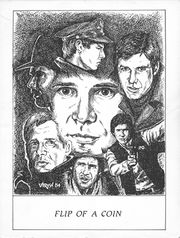 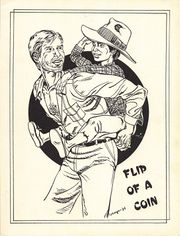 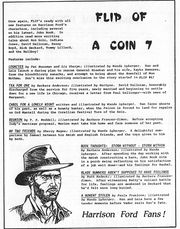 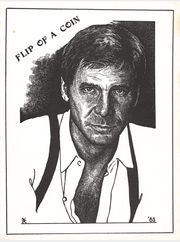 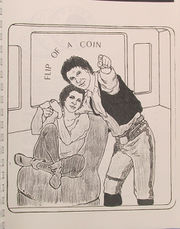 front cover of issue #9, by Rebecca Carey. The cover drawings for #9 were simple, plain, contour-line drawings, all printed alike, not meant to be colored in. However, some fans did color them (of which this is an example).[2]. This illo was also used as the front cover of Resolutions: Solo. 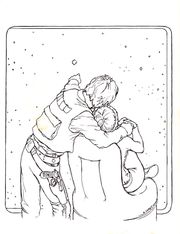 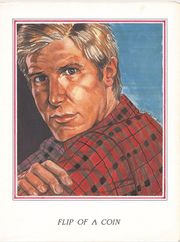 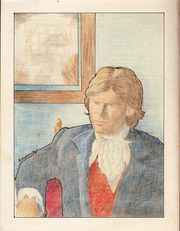 back cover of issue #10, Martynn

Flip of a Coin 10 was published in February 1987 and is 262 pages long. It has 31 stories. It has a color cover front and back. Artwork by Wanda Lybarger (front cover), Martynn (back cover), Julie B. Jones, Jim Markle (inside back cover), Dani, Cherie Fontyn, Dianne Smith, L. Rogan, Yvonne Zan, Suzy Samsom, and SMAP. 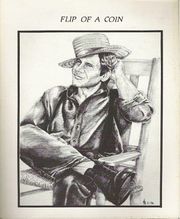 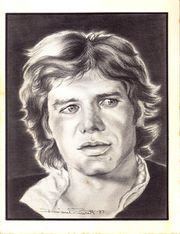 back cover of issue #11, Dianne Smith 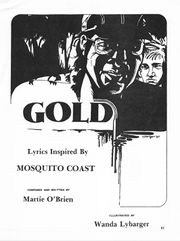 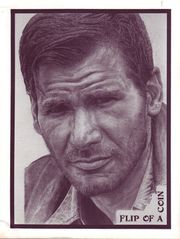 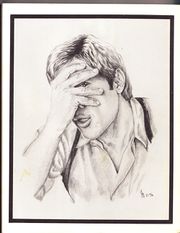 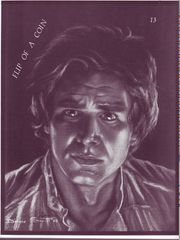 Flip of a Coin 13 has 278 pages, was published in August 1989, and contains 17 stories. It has art by Dani, Wanda Lybarger and Dianne Smith. Front and back covers by Dianne Smith. 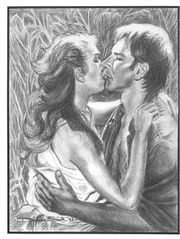 back cover of issue #13, Dianne Smith

I just finished FLIP OF A COIN #13. It's a zine dedicated to all of HF's characters. There are three stories that are really good: "They Shoot Banthas, Don't They?" by Cypher, "Interruptions" by Catherine Anson, and Winter Witness" also by Cypher. The last one is a John Book/Martin Riggs (LETHAL WEAPON) cross over universe and they are excellent (the other two stories in this universe included). FLIP has a lot of SE readers, judging from the LoC pages.[3] 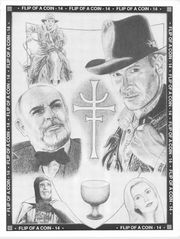 From a July 1993 ad in GAZ: ". This issue includes three selections by Cypher: "Island Witness" - badly injured in the line of duty, John Book and Martin Riggs are taken by their friend Tank Tankersley to a sleepy Caribbean island to recuperate. But their vacation takes a deadly turn when a local activist is murdered and the two big city cops find themselves battling police corruption and the powerful owners of a local resort; "The Last Adventure" - His life had been filled with risk, prizes, and women. Now, with his days drawing to a close and his prospects dim, he knew he had to reach out one more time for his final chance at fortune and glory; "Echoes" -The beautiful widow and her young son were adrift in Philadelphia. At first, they were nothing more that part of John Book's job. Soon, however, they became more—much more. And More!" 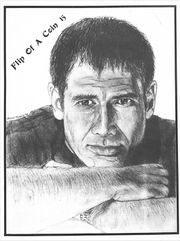 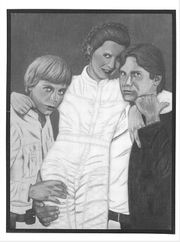 back cover of issue #15, Barbara Frances-Simon 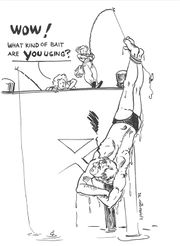 inside back cover, issue #15, Wanda Lybarger 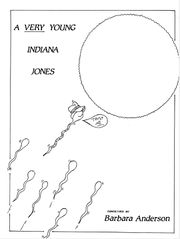 [Trust Fund]: "Trust Fund" in Flip of a Coin #15 has to be the best SW story I can recall ever having read! It's got it all!. All the characters are included, in character, and each has a part integral to the plot ... and boy, is there one wow of a plot!! Adventure, excitement, a Jedi may not crave these things (though Barbara has Luke disclaiming this! Yes!) but the readers sure do! And Barbara gives them plenty! I particularly enjoyed her refreshing characterization of Luke ... a real flesh-and-blood human being of three dimensions ... and a beginning love life with an equally real lady! (Speaking of which, I want more of Spacer and Luke, Barb, so get to it!) Hence, it came as no surprise to me when "Trust Fund" won the "Best Long Story" Star Award of 1992! Congratulations! So, how's about taking over from Zahn for us, Barbara? Pull...llli...ease!! [4]

Flip of a Coin 16 was published in April 1994 and contains 239 pages. Art by Nicola Pearce (front cover), Barbara Frances-Simon (back cover), Dani, and Z.P. Florian. 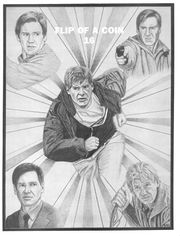 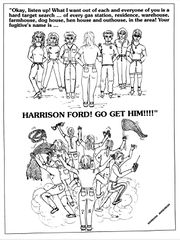 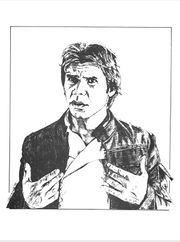 back cover of issue #16, Nicola Pearce 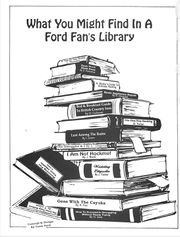 This is the first time I picked up the paean to all things Ford, mostly to check out the SW and Indy stories. (Sorry, but I don't care about bitty-witty characters Harrison played before SW, and there's no way anyone can write Jack Ryan better than Tom Clancy.) I definitely recommend this zine to those who believe Harrison Ford rules the universe, and is the greatest hunk of the past millennium. Men, you won't get it. The zine is very nicely produced, with a professional binding job and excellent artwork. The zine features fan-written stories based on a number of characters Ford has played throughout his career, with a good number of Han Solo stories. The Solo stories are all romantic in nature, most of them with action as well. It doesn't take a rocket scientist to figure out that there's Mary Sue-O-Rama occurring here—one story even featured a character with a name all-too-similar to a known Ford fan. But that's okay. We all do it from time to time. I just wish that some of the writers, in their zeal to portray Han as Super Stud, didn't have to do so at Leia's expense. (Okay, so I'm biased). My favorite story is one by Sue Zahn; it's honest, it doesn't tell you over and over that Han is the tomcat of the spaceways, and it portrays Leia as a real person, not a stereotype or a convenient figure for a sex scene. Another good one is by Ruth Radecki, where Han is portrayed as a mature, level-headed person. A funny, if not risque, story finds Han tracking down the maker of a naughty movie based on his life. Like I said, this is definitely for gals only. #17 should be out this spring.[5]