Facets is a Harrison Ford zine which includes reviews, poetry, art and fan fiction for Star Wars, the Indiana Jones movies, and other films starring Ford such as Blade Runner, Heroes (film), and The Frisco Kid.

According to an issue of Jundland Wastes, the zine Flip of a Coin was created to fill the void left when "Facets" ceased publication. 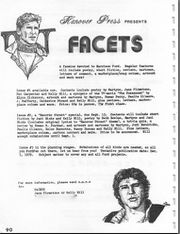 For sample art, table of contents, excerpts from editorials, and many fan comments, see individual issues below.

From the first issue: "As a gemstone reflects the light from its facets, so too does Harrison Ford reflect the light and colors from his characterizations. Without his talent, the stone would remain uncut."

Originally Planned as a Fan Club, and Also a Letterzine

The first issue of "Facets" only had eighteen pages. It soon outgrew its editors' original plans.

From the editorial in issue #4:

We did start out to be a 15 page letter-zine, honest we did. Things kind of got out of hand when we started receiving so many terrific manuscripts in the mail and realized that we had to expand our format to accommodate them. Our approximate length is going to be between 80 and 100 pages, or thereabouts. If anything, the page count will go even higher as the influx of good stuff continues.

Jane Firmstone wrote a letter in 1981 to the Harrison Ford zine, Rogue's Gallery #3 about their zine's beginning:

I'm not surprised that you haven't heard from Harrison about the fan club. We started out intending to be a fan club, got in touch with Pat McQueeney [1] and got the ball rolling. It didn't roll very far. Harrison said flatly that he didn't want any kind of club! Ok, we're flexible. So we went ahead with the club zine, FACETS, AND he's quite happy with it this way, I guess. [2]

The letters of comment were long and plentiful in this zine series.

The editor mentions that some letters were mistakenly printed in issue #2 without their writers' permission, something the editors apologized for and instated a clearer policy. From issue #3:

...we have heard rumblings that there were a couple of LoCs printed without permission in #2. We thought we had everyone's permission, but, obviously, we did not. If the offended parties would write to us we would be glad to apologize. Meanwhile, we are going to instate a policy that if you want your letter used as a LoC designate it as such, otherwise it will not be printed.

The original publisher was Hanover Press.

In November 1981, issues #1-#4 were listed as out-of-print but "available in photocopy form from T'Kuhtian Press." [3] In 1986, T'Kuhtian Press stated it had permission to copy and distribute these zines/parts of these zines.

Printed in the first issue:

We thought that in our first Issue we should set up the editorial policy and later refresh people's memories as is needed. Issue prices will probably fluctuate for the first few issues until we get all our costs figured out. Unlike most zines we have to shell out extra for photo screening (at $3 to $6 per photo) and this will probably drive up the price higher than would be usual for a sine of this size. We hope to have subscription rates available shortly, so stick with us.

Contributors are eagerly sought as are letters. All contributions rate a free zine and for every three published letters the scribe will receive a fourth zine free. We are looking for: poetry dealing with any character that HF has portrayed, vignettes, preferable two pages or under, tho we are willing to make exceptions, cartoons, reviews of movies or performances, articles and artwork. We are willing to print almost anything (keep it G or PC please) as long as you use pen and not lightsabre.

We will print a bad review, but we will not print a nasty one. We leave that sort of thing to Rex Reed and Judith Crist. Nor will we print gossip. Any news we receive of HF's doings will be thoroughly checked and confirmed before we print it. Not having any wish (or right) to infringe on the man's privacy, we will not print how you peeked in his window, or followed his car as he went someplace. Such letters will be returned summarily along with a few choice words.

Art work will be dealt with as though it were our own. Since we work mostly from xeroxes we can accept a good clear, dark xerox of any piece you wish to submit. If it is too large to xerox and you can't find a reducing xerox anywhere, we will cover the original with a piece of clear plastic before taking it to the printer. UPS seems to be the best way to send artwork, since it doesn't appear to loose parcels nearly as often as the post awful and is usually cheaper. We would love to run fantasy artwork and have started with Martynn's wonderful "Fine Corellian Pirate". We're hoping it inspires someone out there to greatness.

Since we are a small zine with a limited audience we have decided to automatically give reprint rights to any and all material that is submitted. There is no need to notify us when you reprint elsewhere.

While these two covers obviously exist, there is no mention of them being separate issues in any of the editorials. Instead, their content was combined into a single issue in 1983. See Facets 9-10. 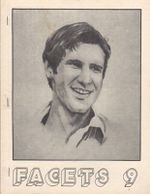 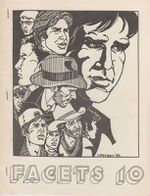