Barbara T has been a slash fan since the 1970s and has written fan fiction and published insightful thoughtful letters and articles about slash, women and fandom. She has been extensively quoted by Henry Jenkins in several of his books and articles as well as by other authors.

She was also a member of the small femmeslash community in Blake's 7 fandom. In 1988, one of her f/f slash stories was published in the UK fanzine The Unique Touch 2. The title was “Customs” and it featured the Jenna/Cally pairing. As a member of The Zen Nine From Outer Space she sang folk on their Hip Deep in Heroes filk tape. 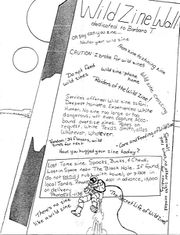 from 1982, a fan's graffiti wall, dedicated to Barbara T, published in Antithesis #20

"Fans mental play is no business of producers and neither are their private communications, however lengthy."[1]

"A thought occurs to me about the unfortunate lack of female slash stories. The majority of slash is based on characters who have a preexisting, strongly emotional relationship in the show where they appear: a lot of slash is expansion on something to be seen in the show (as the slash fan sees it). Female characters, even if you can find more than one in a given show, are unlikely to have an intense, highlighted friendship with each other -- if they have any strong relationship, it's likely to be with a male character. [...][1] Male buddy-shows are attractive to us because they show something that's rare in men. One point is that it's not rare in women. [...] It's the cold-loner depiction of a woman that stands out in the media; and by their nature, cold loners don't run in pairs. In one sense, slash shows men as honorary women: doing what women-as-we-perceive-them do normally. It's extraordinary and sexy because the men don't (usually) lose the strengths of men-as-we-perceive them; the slash character is a hermaphroditic combination of the best of types.[2] [...] -- Barbara T, "Strange Tongues," [1]TNU 3, August 1990; [2]TNU 11, August 1992[2]

"Yes, fans analyze because they're fans. Or are we fans because we analyze?" -- Barbara T, "Strange Tongues," Strange Bedfellows #3, November 1993[2]

"From the screen, a goodly number of media characters have no definite sexual orientation; the assumption that they are straight is made because that is the recognized norm in our culture. A good many other characters demonstrate heterosexuality on occasion, but don't establish a committed relationship of the sort which might exclude other sexual activity. Again, the assumption is that ALL their activity would be hetero is implied by the culture, not inherent in their screen behavior .... This doesn't mean that the character is straight, or that we the viewers must assume he/she is."[3]

"I still don't agree with the concept that property rights over fiction ... include any rights of the author/producer to determine how readers or viewers understand the offering. In this sense, I don't believe fans can take from the producers anything which the producer owns."[4]