The pairing of Tris and Alex (Tristram Lindsay and Alexander Logan) is from the RPS fandom and is coded Led Zeppelin.

To show respect for the real people and to avoid possible legalisms, the writers in the Led Zeppelin fandom often changed the names of the real Jimmy Page and Robert Plant.

One pair of writers, Nancy Arena and Pam Rose, named them Tris and Alex in their short stories and their novel For All the Gods Departed. These names caught on, and other people in the small fandom used those names as well. 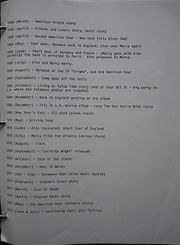 appears to be a fan's fictional timeline, perhaps from "The Binder of Pain". See some of the story titles under "Additional Stories" 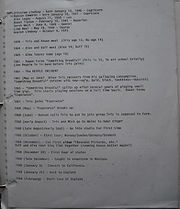 appears to be a fan's fictional timeline, perhaps from "The Binder of Pain." See some of the story titles under "Additional Stories"

Unlike media fandom Tris/Alex fandom did not have TV episodes to create their canon, but fans used live footage that as one fan explained: "Some of which could be called good hair/pants days, and other concerts/interviews that even their mothers...do not show them at their best." [1] Still slash fans, like fans before and after, happily persevered to create their own fanon.

As one fan explained the lack of canon was actually a benefit to those writing RPS: "And the best part is--it *isn't* scripted! We *don't know* what will happen next! Will they stay together? We hope so, but we don't know. Will they "declare their undying love/lust for each other?" Although we're not holding our collective breath for that one, *we don't know*. The remote chance is--they might! After all, as you noted in your message, Robert yelled out at the end of a recent concert in Scotland, "We're back! And we're courting!" So who can tell? That's both the joy and hardship of this particular fandom." [2]

With such a small fandom struggling to swim upstream against the tide of fans dubious of RPS, all fan fiction, even unfinished stories, was greeted with joy: "In fact, back in my Tris/Alex days I had an entire 3-ring binder of unfinished stories by all sorts of writers. Megan Kent started it, and called it "The Binder of Pain." There was so little *finished* fiction in the fandom, sometimes I just had to reread these little unfinished pieces, even though I knew I'd be a wreck afterwards..." [3]

Bird of Paradise is a fanwork with a similar premise. It is an explicit slash coded crossover with Starsky and Hutch/OCs (Derek Quinn and Allyn Sterling) who most fans believed were based on Led Zeppelin. According to the author, however, the OCs were instead based on real people in a lesser known band.[4]

Tris and Alex are variations on two real-life rock musicians named Jimmy Page and Robert Plant. From 1969-1980 they were well known as the lead guitarist and the singer of Led Zeppelin. Those of you who (like me a year ago) have never heard of Zeppelin, only need to know that they were a British rock band, hugely popular in the US, without much support from the press, and that you probably know their songs even if you don't remember he band's name. The most well known song is Stairway to Heaven; also big are Whole Lotta Love, and Black Dog (starts Hey hey momma, say the way you move, gonna make you sweat, gonna make you grove). Anyway, that's who the guys really are. In the fan writings, hey turn into Tristram Lindsay and Alexander Logan. The history of Paradox (the name of the band in the fan stories) follows the history of Zeppelin fairly closely, except that Tris and Alex are lovers from the very beginning. Basically, Alex plays the ingenue, Tris is the manipulator, their relationship is stormy at times, and lasts through 9 years depicted in a bunch of short stories and a very long novel called "For All The Gods Departed." Looks; Alex is 6'3", has long, blond curly hair, blue eyes (green in the novel, in a lame attempt to disguise his likeness to RP), and is often described as looking like a Viking. Tris is around 6', very thin, with long dark brown (almost black) hair, which is curly in the stories and straight in the novel. His skin is very pale and he has a very fine bone structure. The fandom is written almost exclusively by Nancy Arena and Pamela Rose. (There are a few alternate stories by other authors.) Nancy and Pam are searching for a publisher for the novel, which they hope to sell professionally. Basically, the stories tell the history of the band, from the time they meet, up until they have a serious crisis in 1975 or so. The stories vary from the whimsical, through sex vignettes of hurt comfort, angst, and heartbreak. The novel picks up in 1976, as the band tries to recover their music and their relationships, throws in an occult subplot, outside romantic interests, and more. These guys are much nicer than any fandom I've read except Starsky and Hutch and I really love them. In fact, they're probably nicer and cleaner than any real rock stars could ever be, but somehow, that doesn't bother me. In some ways, they get to maintain their youth, because they pay people to handle their mundane details for them (managers, roadies, etc.). [5]

I find that the problem (if problem it is) [of missing exposition] is even worse in a set of stories in the same author-universe, like the Tris/Alex main stories, or Vas/Dex or what was that long set of k/s stories, Continuum? something with a 'C' where they did it once, and then went back and filled in the blanks, and then did a sequel after they died? Any of the stories stand alone in a thematic sense: they all fave their own plots and climaxes, and yet, because you are assumed to have read all of the other stories, they don't go on and on about how much these guys care about each other, or why they can trust each other; you know there is this enormous back story, and it lets you allude to the depth of their relationship very quickly, rather than actually having to show and tell it. I think this is a strength (usually), but it does explain to me why when I read just a couple of out of order Vas/Dex stories, and later a couple of out of order Tris/Alex stories, neither of them grabbed me. You have to read the whole series, even though the plots are self contained, to get the emotional connection. [6]

was reading some Tris/Alex this weekend [...] There is a bit where Alex and Tris are working the crowd on stage (Alex and Tris are rock stars, more or less fan drawn versions of Led Zeppelin band members) by standing close and moving together, and the crowd goes wild. Alex thinks to himself that their audience is mostly straight teenage boys that wouldn't be Elton John fans, cuz they think he's a poof, yet, the audience goes crazy when ever the two of them get real close. [7]