Originally an east coast Star Trek fan, in the mid 1980s, she learned how to vid (from an article in the K/S zine Consort #2, and made a number of well-regarded Starsky and Hutch vids (a couple of them to Romanofsky and Phillips songs) that eventually were released with Media Cannibals tape 2.

She met "Charlotte C Hill", decided they were heterosexual life mates (before that phrase existed), and moved to Santa Barbara with her in the late 1980s. Together they were dealers, published zines (under the name Manacles Press), and starting running Escapade con in 1990. 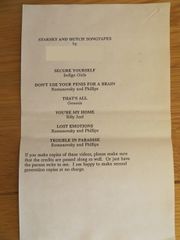 A copy of the playlist that accompanied Megan Kent's early Starsky & Hutch fanvids (this playlist was sent in the late 1980s to a fan in The Netherlands). Unlike many VCR-era vidders of the time, Megan noted that if copies were made of her vids, that the credits be included. In the 1980s, few fanvids contained credits, playlists often lacked the names of the vidders and, unlike Megan's list, even fewer listed their address on the playlist.[1] Finally, most VHS songtapes were accompanied by a request to *not* copy the vids, because each act of copying degraded the quality of the vid making them less and less visible over time.