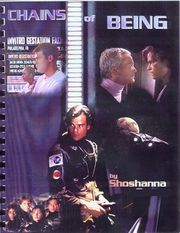 Chains of Being is a slash 136-page (90,900 words) Space: Above and Beyond novel by Shoshanna. The main pairing is Hawkes/McQueen.

From the flyer: "Cooper Hawkes is an in-vitro in a world of natural-borns. A Marine, because the judge sent him to the Corps instead of to jail. Six years old, and caught up in the middle of a war. Cooper has learned, painfully and well, that humans despise him, that human society rejects him: the nipple-neck, the wetbrain, the Tank. That surrounded by his squadron he is still, and always, alone; that, whether in the crowded barracks of boot camp or the screaming fury of battle, none of them are like him, none are what he is. None of them are bound to him with chains of being. Except one."

Reviewer's disclaimer: This is a review of a fan work. Sometimes I like things, sometimes I don't and I'll try to let you know why. I am not involved with THRUSH, the CIA, Disney or any other group bent on world domination and therefore it should be obvious that the following are my opinions and mine alone. If anyone disagrees with me, please post an alternate view. At least part of the reason why I do these is in hopes of an exchange of ideas and opinions. That's what the list is here for. IMHO.

CHAINS OF BEING a Space: Above and Beyond novel by Shoshanna available from Manacles Press [address omitted] $15 plus postage

I don't generally like reviewing novels for a couple of reasons: One, I can usually only give fairly vague ideas of why I liked or didn't like something. I think in the course of a short story, since it is just that, you have more of a chance to focus on things that do and don't work. I also think that novels tend to be more of a house of cards: If one aspect of a short story doesn't work, well, it might ruin the story, but you have still plenty of chances for a good zine. It's one story out of a half-dozen or so. If an aspect of a novel doesn't work in a crucial place, then the whole thing falls and that's pretty much the zine. I also just don't tend to enjoy fan novels as much, with a few exceptions. That said, on with the review.

I finally got it! And I do think it was worth the wait, despite a few quibbles here and there. It's really nice just to have something to sink my teeth into as far as Hawkes/McQueen goes, without it sliding into Hawkes/West or Hawkes/Vansen.

The cover, a photographic collage, is very striking and certainly different for a Manacles zine. However, the layout of the zine stayed true to most Manacles zines with the double columned page layout and word count stressed at the beginning. (It's "over 90,900 words" and 136 pages, for anyone who was wondering.) I only have one real complaint on the technical side, and it's one that I was rather surprised by since I've never seen it in a Manacles zine before: In several instances, two people are talking in the same paragraph. While one or two of these might still be technically correct in the set up (though at least one of those seems to be a run on sentence), there are several times when it's very definitely not.

The story is a long one, going back before the series to Hawkes' time at the facility where he was born and taught. We see his basic development until we find out what led to his questioning "Who monitors the birds?" And his subsequent escape. I really liked many of the little things that are brought up in the story that were never presented by the show, either because they didn't think of it or because Standards and Practices wouldn't have allowed it.

The general handling of sex for the In Vitros, for one thing. I also liked the fact that the In Vitros didn't have any set bunks; they were not even allowed that level of individuality or ownership. It's one of the many subtle touches that I liked and that made the first part of the novel really go by for me despite the fact that I sat down going, "How much do I have to read before McQueen shows up?" (You have your reasons for watching, C, I have mine!)

The intervening years between his escape and his sentencing to the Marine Corps is glossed over to get to 'the good stuff', namely his meeting up with McQueen and the rest of the 58th.

Shoshanna made a point of stating in her "Author's Note" that she was not much interested in adhering to the canon of the show and once you accept that--and the fact that the *show* didn't seem to have much interest most of the time of adhering to the canon of the show, or even basic points of logic--you're okay. With that in mind, the characterisation of McQueen and Hawkes was fairly spot on, though I do think that McQueen's edges weren't as sharp as they are in the show and Hawkes just seemed a little 'off' in places.

She didn't ignore the others in the squad, even bringing in West well while not letting the others overpower the rest of the story. (I have to admit to a very strong urge to kill off West in my, as yet, mostly-unwritten B5/SAAB story in an incredibly messy and undignified way. Blowing up him up while he's on the toilet having sprung to mind...) The story is about Hawkes, first, last and always and about his search for kin. And his finding it. Which brings us to a happy ending that was actually slightly disappointing. Not for where it ended up, because I want a happy ending, but for the mushy feeling of it. Not necessarily mushy as in, "This is sappy and romantic" as much as mushy, "This isn't as solid as it could be."

Small quibble (spoiler, spoiler): McQueen as a virgin?! The logic kinda tracks, but even so I found myself sitting there thinking for the rest of it, "McQueen's a virgin?!"

All in all, though, I would recommend the zine to SAAB fans, but especially Cooper Hawkes fans. The overall story, though, feels more like one that's been 'inspired' by SAAB than is 'about' SAAB, despite the fact these are very definitely the characters I know. [1]

Christy reviewed Shoshanna's SAAB novel. I am not a fan of the show, and only saw about 45 minutes of the series (plus lots of vids), but I wanted to say that I really enjoyed it as well. My reactions therefore were really more about the novel's structure and its standalone merits. I thought it worked well for the naive reader, since there was tremendous explication and expansion of Hawkes' background; and although the slash relationship doesn't appear for some time, I actually enjoyed the character exploration and cared about what he was going through.

I had one or two aesthetic issues though. The novel feels very flat structured... not sure how to explain this, but the extended use of narration over dialogue, internal anguishing, and the number of years that are covered without major focus on any one set of *present* time events made me feel there wasn't any particularly peak incident. Everything seemed to be as important as everything else on the road to Hawkes' growing up. I may not be attributing that feeling to the right things narrative-wise; it may be just due to the fact that the slash story felt less important than the Hawkes story, contrary to expectations for the genre, and this perhaps made my reading of it go a little haywire. But I was thinking about the "peak experience" thread and thinking as I read it that I wasn't sure what the peak here was, slashy or otherwise. The final scenes feel very understated. This may be one reason Christy felt the ending was a little slim on the happiness angle--?

Other mine squirm factor for me: I don't get into the regressed partner-doing-sex thing (Gentle on my Mind, that UNCLE thing by Hephaistion, sp?), and this basically child Hawkes experimenting with the adult McQueen thing made me personally uneasy. Making McQueen a virgin evened that out a bit, thank goodness.

Overall very well written and I did enjoy it without even being a fan, despite these minor points. I'm glad I got talked into buying it :-) [2]

Well, I was going to post some thoughts about Chains of Being, but [Michelle Christian] and [Lynn C.] pretty much said it all, probably more lucidly and in more detail than I would.

I wanted more McQueen in the novel, but that's fannish preference. I really liked the details of In-vitro life; Shoshanna did a good job of thinking through the details the show gave us and extending them. The whole first half of the novel was really enjoyable. I was waiting for McQueen to show up, but had plenty to keep me interested during the wait.

McQueen as a virgin was a real shocker; woke me up all right, but Shoshanna made a decent case for it, and I liked the detail that McQueen had read about sex even if he had no direct experience. Seems right in character for him. I found the last third of the novel a little flat; Lynn expressed what I felt very well. Shoshanna shows invitros as unexpressive emotionally, which is a reasonable interpretation, but made it hard for me to identify with their feelings sometimes. I wanted to get caught up in Hawkes' emotions, but felt more like a watcher sometimes.

It's a novel well worth reading, with lots of good detail that I'm sure will be borrowed by other people writing in the fandom. As far as I'm concerned Shoshanna's version of the invitro facility is definitive. [3]