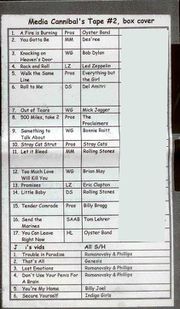 playlist on the back of the videotape

Tape 2 covered the next two years of the Cannibals' vid collaboration, 1995-1996. By this time, the Cannibals had started including liner notes via a photocopied sheet of paper and a listing of what vids were in the box taped to it. Duplication was still done manually, with Sandy making the majority of the copies. Tape 2 also contained Megan Kent's early Starsky & Hutch vids, which had been made around 1987/1988 and were very difficult to get to.

The Media Cannibals are a loose group of people who live in Seattle, (or visit frequently) who like to do fannish things collectively. MC is working on a zine at the moment too (Guilty Pleasures by the Media Cannibals, due out at Escapade VII.)

And for those few that care


Blast from the Past Contents

Original notes for "Blast from the Past: Starsky and Hutch Vids by Megan Kent"

Megan made these Starsky and Hutch vids back in 1987-88, and they're wonderful! Though at times you can tell that vidding styles and techniques have changed since then, they use strong songs to tell clear stories about the characters' relationship--just the way I like vids to be.


Historical Perspectives on the Vids

"A Fire is Burning" was considered a "heart-pounding" vid, as the clips were just so fast for the time.

At the time that this tape was created, RPS was still very underground, so it was highly unusual to have an RPS vid shown at a con or included in a collection tape. The fact that it was a band fandom at a media convention made it doubly rare.

"Roll to Me" may have been one of the first Due South vids created.

"Stray Cat Strut" won a first place award at Zebracon the year it was shown.

"We Could Leave Right Now" may be the first Duncan/Methos vid created.

Review of the Tape

In November 1996, Michelle Christian posted the following rewiew of the tape to the Virgule-L mailing list. It is reposted here with permission.

"Very tentative reviewer's disclaimer: I'm not sure how well this is going to work. I've never reviewed Music Vids before and I thought of sending something like this just to Sandy. I then realised, though, that if I had, she'd probably say something like, "Why didn't you post this to the list?" so I'm cutting out the middle man. Please keep in mind that while I have suggested scenes to people and songs for vids, I've never actually made one myself. I can only go by what I think, what works for me and what doesn't. And as always, the following are my ideas and mine alone and I'd love to hear other people's opinions as well. They wanted reviews of vids, they should know better than to ask!

MC has made some of my favorite vids in various fandoms and this one has a couple more favorites. It also has the added bonuses of Lynn C.'s HL vid and six of Megan Kent's S&H vids from a few years ago.

There are only two vids in a fandom I'm not interested in and they're both for Lef Zeppelin ("Rock and Roll" by Led Zep and "Promises" by Eric Clapton). I'm not that fascinated with Robert and Jimmy (okay, especially not Jimmy!) and they actually managed to pick one of the very few EC songs that I don't care for!

"A Fire is Burning" (Pros) sung by Oyster Band--A very nice, fast-paced vid. I liked having something with a lot of quick cuts right away and the song definitely fit the show.

"You Gotta Be" (Multi-media: WG, S&H, DS) sung by Des'ree--I really liked this one. I think it might be slightly off the beat one or two places, but a very solid vid for a very solid song. (And, of course, I knew that the poster of Robert from one of the S&H episodes wouldn't go unnoticed in certain sectors...)

"Knocking On Heaven's Door" (WG) sung by Bob Dylan--It's interesting that all the WG vids this time around are F/V and that they're all of the "poor Baby" variety. Not that Frank doesn't lend himself to them, but after the wide mix of WG pairings on the first tape, this might be a bit disappointing to the Heretics in the audience. But this is still a lovely, mournful vid--to the best version of this song!

"Walk the Same Line" (Pros) sung by Everything But the Girl--This is one of a couple of songs that I have one major complaint about on this tape: I don't feel that the music really fits the show. The lyrics themselves are good, the scenes fit the lyrics, but the music--it just doesn't quite fit.

"Roll to Me" (DS) sung by Del Amitri--One of the two DS vids on the tape. It's another solid entry, though I like the other DS vid better.

"Out of Tears" (WG) sung by Mick Jagger--Yet another "poor Baby" Frank vid. I have to say that while I don't generally like Mick Jagger that well, this song and vid really work well.

"500 Miles (take 2)" (Pros) sung by The Proclaimers--This is the redo that they did to a vid that's on the first tape. I always liked that vid, but this one definitely feels tighter, which makes it that much more enjoyable.

"Something to Talk About" (WG) sung by Bonnie Raitt--When I first heard this song, I knew it was going to wind up being in numerous vids. It's got the slash feel to it and is just generic enough in the lyrics to fit almost *any* show. This is one of the better ones, though not my favorite. I think I'm also going a little sour on the whole song and concept; I think this has become like Bonnie Tyler's "Holding Out for a Hero" a few years ago: I'll shoot the next person who does a vid to it!

"Stray Cat Strut" (Pros) sung by the Stray Cats--This is one of the few vids I saw at Z-Con last year and I about laughed myself sick. I *love* the whole concept and execution. If Doyle's a cat, he's definitely an alley cat.

"Let It Bleed" (Multi-media) sung by the Rolling Stones--It says in the liner notes that this isn't a living room vid, but is meant to be seen in a group. While I can definitely see where this would be more fun with a selected group (how long is it until Escapade?!), I enjoyed it plenty in my living room, all on my lonesome. Just one complaint: Duncan Richie?! Yech! (I'm not going to mention Crockett/Tubbs. Really I'm not.) Have to admit, though, I loved the scenes for the "cream on" lyrics.

"Too Much Love Will Kill You" (WG) sung by Brian May--*The* "poor Baby" Frank vid and my personal favorite of the tape. It's just a beautiful song and a beautiful and heart-wrenching vid.

"Little Baby" (DS) sung by the Rolling Stones--I prefer this to the other DS vid, though they're both very good. And I never really noticed before how much Ray usually leads the two of them, no matter how much he's bitching at the time.

"Tender Comrade" (Pros) sung by Billy Bragg--This one is an a cappella song and though I didn't notice the cuts that Sandy makes mention that she made in the song itself, I still felt that while the words worked, the song itself really didn't for a Pros vid.

"Send the Marines" (SAAB) sung by Tom Lehrer--This song is perfect for this fandom, McQueen is a perfect John Wayne (and Vansen a Randolph Scott)--and for some reason this bid still falls a little flat for me. Maybe it's because I've always loved the Pros vid to this song. But that didn't stop me from loving "Vatican Rag" for WG even though I've known and loved the S&H version longer. So, I'm inclined to say that it just fell flat. Though I have no real explanation why.

"We Can Leave Right Now" (HL) sung by Oyster Band--This is the vid by Lynn C everyone came back from Virgule and told me I *had* to see. And they were right! Lovely vid with some great Duncan/Methos scenes. You doing any more, Lynn?

The last six vids are all Megan's old S&H vids. And they all suffer uniformly from the same problem: Not enough cuts. I know that this is kind of unfair since I'm seeing them after watching the MC vids where they used a bit more up-to-date equipment, but...This is more notciable and therefore more of a problem in some of the vids than others, such as "Trouble in Paradise" (Romanovsky and Phillips) and especially "That's All" (Genesis). Some of the others are still lovely, though, especially "Lost Emotion" (R&P). It's a different angle and a lovely, if despairing one. And could there be a more perfect song for S&H in hormonal heterosexual rut than "Don't Use Your Penis for a Brain"? I think not..."You're My Home" (Billy Joel; nice idea, though I'm not sure the vid itself works) and "Secure Yourself" (Indigo Girls) round out the tape.

All in all, definitely worth the $10. It's not got as many vids as the first tape (I don't think) and perhaps not the variety--no B7 vids this time around?--but it still has some great stuff and I think that most of them are ones that will wear pretty well."