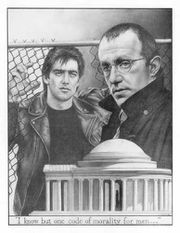 cover of A River That Runs Both Ways, Caren Parnes. The image shows Vinnie Terranova (left) and Frank McPice (right). A fan in 2010 said: "This is the badass Frank I know and love." [1]

Wiseguy was a show based around Vinnie Terranova, an undercover Fed, and his irascible handler, Frank McPike. Each new undercover assignment set up an arc of episodes, unusually so for its era; there were roughly two arcs per season, filled out with occasional standalone eps. Each arc introduced new bad guys.

The show lasted three years in its original form; another 1/2 year of 4th season after Vinnie's actor left. At the time the show was on the air, TV Guide mentioned the homoeroticism of the plots. In 1996, ABC aired a reunion movie.

Wiseguy was primarily a slash fandom, based around four characters: the titular Wiseguy, Vinnie Terranova, an undercover fed; his handler, Frank, his first mark, Sonny Steelgrave, and another morally-wounded undercover agent he runs into in his second case, Roger Lococco. With the exception of a few Roger/Frank stories, virtually all pairings are Vinnie/someone else.

In 1996, the Media Monitor had an ad for the TerrSitLst, a mailing list for readers of the lengthy Wiseguy novel The Terranova Situation. It featured discussions of the novel and occasional fiction.

In 1996, the Media Monitor also listed a Wiseguy fan site that offered: "2 cast photos (1 from the series and 1 from the recent TV movie), an episode guide, filmographies of the series' stars, and more." An archived copy can be found here.

Small Wiseguy slash fan fiction archives were set up here and here in the late 1990s.

Wikipedia has a good Wiseguy article