A Consortium of Light 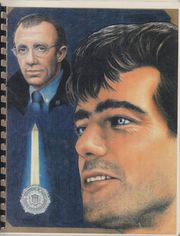 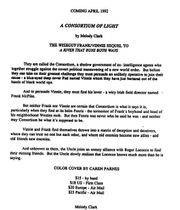 flyer printed in What If...

A Consortium of Light is a slash 54,600 word, 104-page Wiseguy novel by Melody C.. Caren Parnes is the artist and Sandy Herrold did the proofreading.

This zine won a 1992 STIFfie Award for "Best Wiseguy Novel," though that year it was the only zine in this category.

Art has been included on Fanlore with both the artist's and the publisher's permission.

This zine is a sequel to A River That Runs Both Ways.

Frank has lost Vinnie to government expediency and CIA interests. Roger Lococco arrives on the scene to help Frank pick up lost pieces, and he and Frank converge on Vinnie's captors. Frank is reunited with Vinnie in a very romantic ending.

Frank McPike must pick up the pieces of his heart and life, both of which shattered when Vinnie disappeared. His search for Vinnie leads him to a consortium of international agents who've abandoned their own respective national obligations to serve a greater law. Frank is forced to scale a formidable conspiracy to save the man he loves more than life.

They are called the Consortium, a shadow government of ex-intelligence agents who together struggle against the covert political maneuvering of a new world order. But before they can take on their greatest challenge they must persuade an unlikely operative to join their cause, a blue-eyed deep cover Fed named Vinnie whom they have just bartered out of the hands of black world ops.

And to persuade Vinnie, they must find his lover - a wiry Irish field director named Frank McPike.

But neither Frank nor Vinnie are certain that Consortium is what it says it is, particularly when they find at its helm Fenris - the tormentor of Frank's boyhood and head of his neighborhood Westies mob. But then Fenris was never who he said he was - and neither may Consortium be what it's supposed to be.

Vinnie and Frank find themselves thrown into a matrix of deception and deceivers, where they can trust no one but each other, and where old enemies become new allies - and old friends new enemies.

And unknown to them, the Uncle joins an uneasy alliance with Roger Lococco to find their missing friends. But the Uncle slowly realizes that Lococco knows much more than he is saying.