For similar titles, see The Awakening.

Awakenings is a slash multifandom anthology.

Awakenings 1 was published in 1995 and has 157 pages. It has a full-color Wiseguy cover by Suzan Lovett. 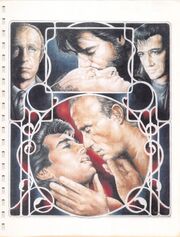 [zine]: When I first heard about this zine all I could think was, "Marion McChesney is doing a *slash* zine?!" I for one put this forth as Exhibit A in the Editorial/Shmeditorial debate. I found it very interesting how she talked about her transformation from someone who 'just didn't get it' to one of us. Too bad I didn't find the rest of the zine as interesting.

Overall, I'd classify this as a Lezlie's Reece's Cup (remember the whole 'You got your chocolate in my peanut butter' thing? Try explaining to people why I keep snickering when passing the candy lane in the drug store now...) kind of zine. With the exception of about two stories, they are almost all first-time, spontaneous pwps. (Please hold down the choruses of 'Not that there's anything wrong with that!') I also had a problem with the general editing of this zine, namely that I wish there had been more of it. Some stories seem to have been done fairly well with only the few expected typos while others have more typos, grammar errors and inexplicable placements or non-placements of quotation marks. When you get enough of these minor irritations together that they detract from the stories themselves, then this is something that has to be looked at. This is far from the worst editing I've seen in a zine, even just among the ones I got at Z-Con (that honor goes to Playfellows 8 and if I ever feel in a particularly bitchy mood, I might sit down and review that puppy), but it was still something that bothered me.

Now to the individual stories:

I would like to say that not only did I skip over all the poetry in this zine, but I also skipped three stories which were in universes that I have absolutely no interest in right now: 'Night of the Apology' by Kate McChesney (WWW), 'Softly, While You're Sleeping' by Psmyte (and no, that's not a typo; NEW TEEN TITANS), and 'Just One Night' by Matilda Willard (VOYAGE TO THE BOTTOM OF THE SEA).

This zine dabbled in a bit of every fandom, which was one of the things that first wanted me to get the zine. (Okay, that and the Suzi Lovett color WISEGUY cover.) There is basically one story representing each fandom, except MUNCLE which has several.

'Remember When' by Theresa Kyle (MUNCLE)--It's hard to have a problem with the ludicrous plot, this being UNCLE and also this particular story being just a slight reworking of one of the aired episodes, 'The Nowhere Affair'. It was an okay story for me, kind of cute, up until the point Illya started crying... I'd also put on an alert to Shoshanna on this one: There is gratuitous translation in this one; Napoleon says a phrase in Russian for no real reason, and it's translated in a footnote.

'The Truth and Honesty Affair' by Mary Millard (MUNCLE)--This must be the Issue of the Weepy Illya. Except in this story, he's not just weepy but suicidal. If you're looking for a death story, though, keep looking, this one turns out all right.

'Safe Harbor' by Kate McChesney (MUNCLE)--A sweet, sappy, honeymoon story and for all of that, possibly the best UNCLE story in here. This one is about as far away from angst as you can get.

'We That Are Young' by NJ Kippax (YOUNG GUNS II)--A good story from one of this (very) small fandom's best writers. This is a 'missing scene' from the movie and as such carries with it the air of tragedy necessary. Definitely bittersweet, but one of the best stories.

'Rainy Days and Birthdays' by Kate McChesney (S&H)--Definitely a soapy outing. This story is based upon April Valentine's ULY, er, DISTANT SHORES, but while it has them say and do (almost) all the right things, it just doesn't have the emotional feel. There is also a bit of overuse of eclipses (...) in this story. That said, I will admit that I would have liked this story more if it hadn't hit one of my S&H pet peeves: The author has Hutch calling Starsky "David". ACK!

'Head and Heart Together' by Calico (MIAMI VICE)--My big complaint about this story is that it just didn't *sound* like Castillo and Crockett. The dialogue felt off through the whole thing, but wat really stopped me was the following sentence said by Castillo to Crockett: "'Slow down, tiger.'" Marty calling Sonny (with whom he is in bed with and not a 12-year old boy he's out playing catch with) "tiger"? I think not.

'Dream Lover' by Theresa Kyle (QL)--This is the shortest story of a zine and once someone can explain to me how Al can not only have no interest in sex and fake an orgasm while having vaginal intercourse with Tina, I'll probably enjoy it alot more.

'The Vistor' by DVS (DS9)--I consider this to be the best story in the zine. Part of it is is that there is a point other than just the sex, although that's nice, too, and I think it's one of the stories with the best editing in it. All that said, I will admit that my enjoyment of this story also had something to do with the fact that it's a relatively new fandom for me, and I know that that does make a difference sometimes.

'Earth Lost' by April Valentine (ALIEN NATION)--Yep, it's George/Matt and it's pretty good. Actually, it's probably more than 'pretty good' since this is the first story that comes close to making me believe the possibility of this. I'd rank this as another non-Reece's Cup story in the zine.

'The Story of My Life' by Kate McChesney (WISEGUY)--Details can make or break a story for me, especially one that's already teetering on the so-so border. This one had two things, both of which I realize are relatively small things in the story, that I felt went against it. One was that it's stated that Vinnie thought Frank was already dead when he went after Kousakis. (What was your first clue, Vince? The fact that he was gasping for air and grasping at you?) The other was the fact that the few times they referred to Lynchboro by name, it was called 'Lynchburg' instead, which, the first time I saw it, made me pause in reading and go, 'Where?'

The only other things in this zine were three short pieces called 'Notes on a Pillow...a love letter', one each for UNCLE, S&H, and WISEGUY. Not only should all three of these come with a warning to diabetics, but they all sound like they were written by the same person, a person who was none of the people supposedly writing these notes!

So overall, it's a zine with the exception of about two well done stories, ranged from so-so to I-don't-think-so, but a gorgeous cover. (It's Suzi's Frank/Vinnie color piece with the picture of Vinnie kissing Frank on the forehead in the hospital during 'Brump-Bump!') If you're looking from a words per dollar pov, I'd say it's probably worth it, though I can't remember the exact cost--between $18-20, I believe. (Let me take this moment to strongly encourage zine eds to put the prices of zines as some of the info actually on the title page. Bless those of you who already do.) If you're looking after a "I want x-amount of stories to be good for x-amount of dollars I spend," I'd suggest trying to find someone to borrow it from. I tend to look at things a bit differently, though: I consider the fact that my curiosity, always something to be reckoned with, is sated, I got a zine with a really nice cover (a print of which would cost me at least as much as the whole zine did) and the fact that I came away with at least a couple of stories I really liked, and I'm relatively satisfied, though not overly pleased with the zine.[2] 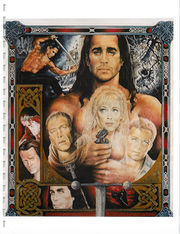 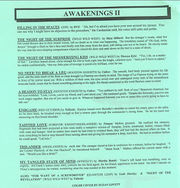 Awakenings 2 was published in October 1996 and has 146 pages. The cover is by Suzan Lovett. Aside from some occasional clip art, there are no interior illustrations. 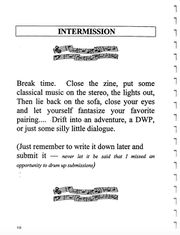 Mentioned in the editorial: page 112

From the editorial]: Well, as usual, it's 1:30 a.m. and I have to get up for work at 7:30 a.m. I'm still writing this editorial and to make things worse I still have one blank page to fill. I hate white space. I do this to myself everytime. I insist on starting my stories on a right hand page. The problem is that stories don't always end on the left. And I'm fresh out of ideas. So...if you turn to page 112 you can see my solution to the problem was to throw the page open to the reader's imagination.

[Tainted Blood (zine title)/Tainted Love (online title)]: Jan says: To balance out the sweetness of June's recommendation, go and read Tainted Love by Tenaya, a Highlander/Forever Knight crossover. Tainted Love explores some of the issues of immortality in a way I've never seen before. It's a wonderful portrait of what it might be like for Methos to run into a vampire -- an immortal so dangerous and twisted that even the ROG isn't sure how to escape. Tenaya's careful, loving descriptions and her intelligent treatment of the quickening make this one of my favorite Methos stories. So give it a try, even if you don't watch/read Forever Knight. I'd never seen that show when I first read this story, but I loved it anyway.[4]

It was a Methos/Duncan/Connor and not only did it not make a lot of sense, it was also just plain odd. I got the impression that the author (sorry, don't remember the name) maybe thought that Duncan was cute, liked the idea of a threeway, but didn't like Duncan's personality. Methos and Connor have sex with him throughout, Duncan is unconscious through most of it and has no personality at any point. The premise is that Duncan has been 'killed' and buried alive in rock and Methos and Connor need to revive him in time to testify against his attackers. Since they don't have a Kimmie on hand who would be willing to just stand next to Duncan while Methos takes his head, the next best thing is for them to have sex with and around him since orgasms withing two (or more) Immortals makes sort of a mini-Quickening.

another slightly different version of the cover 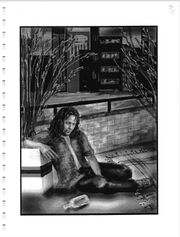 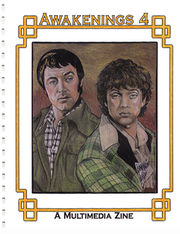 [Music of the Heart]: Post-"Involvement", Bodie and Doyle start a relationship and are forced to find another employment when they're kicked off CI5. It's not until years later that they find out Cowley's true reason. [6] 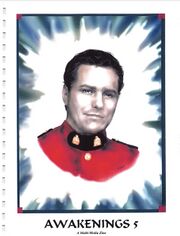 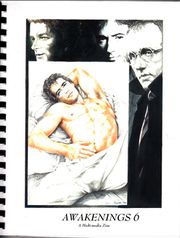 Awakenings 6 was published in 1999 and contains 150 pages. The cover is by Suzan Lovett and there is no interior art. 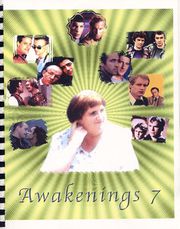