If you're looking for the zine of the same name, see Alien Nation (zine)

art by MJRiddle, may be from a zine

Alien Nation was a science fiction film and television series. The series aired on Fox and was soon cancelled. The cliffhanger ending was resolved in the TV movies that eventually followed. Alien Nation's premise is that a ship of aliens, all former slaves, crashlands on Earth. The interspecies conflicts that result as these "Newcomers" integrate into human society are meant to be a metaphor for real-life race relations in Los Angeles.

Alien Nation is notable for its canonical Mpreg. 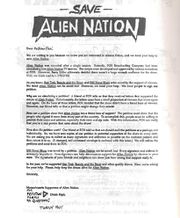 a 1990 fan campaign letter
Alien Nation fandom took off fast and stayed strong during its run, existing in zines and at conventions, with discussion, fanfic, filk, and fanart all present.. According to Henry Jenkins in Textual Poachers, after premiering in fall 1989, Alien Nation:

...almost immediately began to develop a strong following. Alien Nation panels appeared at science fiction conventions by late fall; an Alien Nation fan convention was held in February 1990. I encountered Alien Nation songs at conventions by early 1990. A letterzine focused on the series, Newcomer News, debuted at MediaWest that spring as did a first-season episode guide (A Tenctonese Guide to the Universe) and calls for submission by a number of proposed Alien Nation fanzines (Alien Relations, Fresh Beaver Tails, The San Francisco Treat, Slags Are People Too), many of which planned to appear by fall of that year. ... the Alien Nation panel at the 1990 MediaWest convention attracted the highest attendance of any event as large numbers of established fans wanted to see what type of fan culture would develop around this still new series. Newcomer News sold out of its first printing early in the convention and its editors had to locate a local printshop which could produce new copies to satisfy the unexpected demand for this Alien Nation letterzine. All of this excitement was generated by a program that remained at the bottom of the Nielsen Ratings and was canceled by the network at the end of its first season. As soon as its cancelation was announced, the fan community was able to mobilize a campaign for its return, though their efforts have so far produced no tangible results.[1]

In the mid-90s, the fandom began moving online, with online newsletters, mailing lists, and a variety of fan sites springing up, among them the online version of the existing Alien Nation Appreciation Society 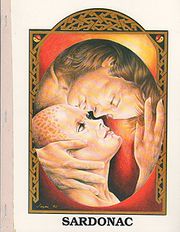 cover of Sardonac by Suzan Lovett, portrays Matt and Cathy

There were only a handful of slash stories written, but those were generally Matt/George or Matt/Marvin Gardens, the latter of who was a one-shot Newcomer character from the show who, under the influence of an aphrodisiac/bonding chemical, fell in love with Matt.