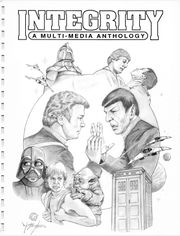 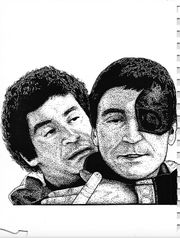 The cover art of this zine, without the lettering, was also available for sale from Bill Hupe.

From a 1990 submission request in The Clipper Trade Ship #70:

INTEGRITY is looking for fiction concerning our favorite media characters performing great acts of loyalty or friendship for which we have come to enjoy them. We are looking for multimedia stories putting our favorite people into situations where they show their best. INTEGRITY is searching for fiction/art concerning themes of sacrifice, loyalty, devotion, friendship, and of people aspiring to greatness. We want plots similar in mood to such cinema greats as A Man For All Seasons, True Grit, A Tale Of Two Cities, I Claudius, 1776, The Abyss, Laurence of Arabia, Ben Hur, Chisum, and Lost Horizon. Let us see relationship stories of our beloved favorites at their best, or perhaps, while working together to overcome enormous odds. The universes we're interested are: Star Trek, Alien Nation, Blake's Seven, ST:TNG, Star Wars, Dr. Who, Battlestar Galactica, Wizards and Warriors, Broken Arrow, V, Johnny Quest, Land of the Giants, Rat Patrol, Man From UNCLE, and original science fiction and fantasy. We already have some great submissions and are looking for more. We expect this to be a big issue. Artists, please send photocopy samples of your art. Also, please tell us what universes you would prefer to illustrate. Other universe submissions not mentioned above are dependent upon editors' discretion. Hurt/Comfort is permissible, as long as the characters remain in character. The zine will cover G to PG rating. Send submission or inquiries with SASE to INTEGRITY, Melva Gifford, Roz Allen... 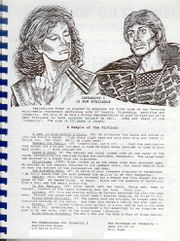 From a 1992 ad in Zine Scene: "A new 270 page [1] multi-media anthology edited by Melva Gifford, portraying our favorite characters performing acts of loyalty, friendship, sacrifice, and integrity. Contains material from both Star Trek series, B7, Alien Nation, Wizards and Warriors, Star Wars, as well as some original fiction. Primary emphasis on Star Trek (both) and B7."

Have you ever read a story or seen someone's art that you wish other people could enjoy? Well, that is what I feel about the works of the talented artists and writers that are in this zine. I want to thank my contributors, and co- editors for sharing their talents in this publication. I have to admit quite frankly that the positive attributes of this publication are due to their participation.

Once, while I was attending a convention in Denver, one of my co-editors and I were conversing with a small group of fans. Being the enthusiast I am, I invited one of those fans to submit something to my zine. At that time, a local fanzine editor, in the same group, suggested to that same contributor that she should not submit material to a first time zine. The editor's reasoning was that you should see what kind of zine it will be before you submit to it. I found this attitude to be very disappointing. As a contributor myself, and a reader of fanzines, I have seen numerous advertisements for publications that have such wonderful potential but sometimes never went to press due to lack of submissions. Then I see some 'one time zines' that will never be doing a second issue because it was so hard trying to get submissions for the first one. I've often regretted not being a part of so many zines. The editors had done such a good job and I was not able to be a part of that publication because of procrastination or some other excuse. What's that idea about pyramid opportunities? Get in on the ground level!

It is my sincere wish that new and experienced writers and artists would contribute to a variety of fanzines, both new and those that have been around for a while. That way, more fans can enjoy your talent and the editors can present a better publication for fans to enjoy. So please do not limit your contributions to just 'experienced' editors. I did a zine once called The Monocle where writers and artists of Wizards and Warriors were willing to take a chance submitting to a first time editor. The zine seemed to sell fine and Wiz fans liked reading a publication dedicated to that fandom. It can really burn you out, working hard on a zine, without the support and encouragement of fellow fans. And I've seen some one shots that sure don't look like first timers. There are some very talented people that are putting a lot of ability and skill into their first time zines. In light of that, I really appreciate the contributors within these pages for giving this relatively 'new' editor a chance.

I was disappointed in Integrity, a 330-page zine also from Bill Hupe and Peg Kennedy for $21. There were only a couple of Star Trek stories and the rest were mixed media and general science-fiction, which I couldn't get into, except for a Star Wars one about King Arthur's time.

One of the Trek stories was concerned with what might have happened if Kirk had stayed female, a follow-up to another pro-published story in which an alien civilization would change the sexes of passing ship crews. I believe it was called "Procrustian Petard" (sp).

The other one was about Sarek calling Spock home for a Vulcan ceremony making him his heir. [2]