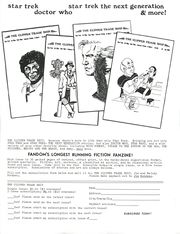 The Clipper Trade Ship is a gen multimedia digest-sized anthology.

Later issues were offset, digest sized, for the most part, published quarterly. There were, however, some major gaps in the very last years; for example, issue #75 was published a full two years after issue #74.

It is described in Boldly Writing: The Clipper Trade Ship was one of the longest-running fanzines in 'Star Trek' fandom, though after 1977 it diversified and included stories and articles from fandoms other than 'Star Trek'."

Collect film clips? A 'Star Trek' fan? Have you tried "The Clipper Trade Ship" lately? Stories, art, articles and ads, all for 50 cents or five issues for $2 on a quarterly basis... The whole idea for TCTS is to provide a place for clip collectors to get together. [1]

Bringing you another boatload of art, articles, stories, and ads from the lands beyond. Put out quarterly... The Clipper Trade Ship (TCTS) is a non-profit fanzine that's a hobby and occasional headache of mine. [2]

After 32 issues. The Clipper Trade Ship has run out of decent fiction to print! We desperately need good stories - Star Trek, Star Wars, Star Trek, Dr. Who, Star Trek, Battlestar Galactica, Star Trek, Space: 1999, Star Trek, Logan's Run, Star Trek, Man From Atlantis, Star Trek, Buck Roeers, Star Trek, Lost in Space. Star Trek, and so forth — oh, yes, and Star Trek, too. please. It doesn't matter how short or how long, as long as it'll fit into a PG-rated 'zine, and as long as it hasn't seen print elsewhere before. Granted, we're not a "biggie", but why not give us a try? Manuscripts need NOT be double-spaced typed — as long as it's legible we'll take it any way we can. Don't delay, borrow a pencil and a stack of outdated flyers and jot down that story you've been meaning to write, or dust off that one that's been sitting in the bottom drawer ever since you heard that there weren't going to be any more issues of Interphase, and send it to Ye Desperate Olde Editors, Jim £ Melody Rondeau [address redacted]. No, sorry, we will not throw in a blender if you do it before midnight tonight [3]. Thanks! [4]

As per the title, "The Clipper Trade Ship" had a focus on film clip collecting. This topic waned in later years, however. By 1983, current fans were perplexed regarding the topic. Two different fans in issue 43 commented: "I tried to read Gennie Summer's article on clips but I confess I don't know what 'clips' she was talking about. Filmclips? Of what?" and "I didn't realize that TCTS had anything to do with film clips, (I mean, it only has it in the title.)"

As I believe I have said before in a review of this zine, TCTS is a bit unusual since it is directed toward people who are at least interested in film and film clip collecting. I say unusual only because TCTS caters to a splinter group of film and ST fans, and ST itself is a splinter from SF, which in turn is a splinter off of fantasy which is a cousin to mythology, and so on, and so on. One might think that a magazine going out to such an audience would have an extremely limited appeal. Probably so, as I don’t doubt TCTS prints more than 1000 copies, but uniqueness can also draw in readers, too. I have some film clips of my own and like movies, but I am not an avid collector or true movie buff, yet this zine is still interesting too because the editor has access to interesting and out of the way information and his zine offers things that no other zine in fandom offers. [5]

In his fanzine, The Clipper Trade Ship, James Rondeau has discussed some of the various ‘unshot’ Star Trek scripts from time to time. One was Paul Schneider’s “Tomorrow the Universe”, involving an Adolph HitIer character which was reworked into “Patterns of Force”. Another was “He Walked Among Us”, by Norman Spinrad and Gene L. Coon, which was unused because of its controversial religious theme. It was, however, ‘cobbled up’ and portions of it crept into other second season episodes. Another unshot story was “Sargasso of Space”, but Rondeau reported once that this outline is not in standard format and was uncredited. Some have speculated that Dorothy Fontana wrote it, while others theorize that it may well be a fan effort. Orion Press, in fact, published a novelization of this script which substantiated this theory. [6]

This is a nice little digest zine from the Rondeaus, whose services as zine dealers I would recommend based on my happy experiences with them. It's mostly ST and STTNG, with just a smattering of miscellaneous other things. The B7 content is negligible, but the zine is attractively produced and very inexpensive ($2 or less per issue), so you might consider getting it if you're a Trek fan as well. [7]

“TCTS” is a highly specialized zine of great use and enjoyment to clip and slide collectors. Articles and fiction are sometimes carried, plus reviews and a nice want ad section, but its greatest value lies in what no other zine provides—clip identification. Two staff specialists classify backgrounds, and this has resulted in excellent pieces complete with detailed drawings... This zine is highly recommended, filling in a professional gap for any clip collector, edited and published in a professional manner. [8]

One of the best fan stories I ever read appeared in Clipper Trade Ship, an old print zine back in the days when that was how you got your fanfic. It was a Prisoner story from the POV of Rover. It was a page, maybe a page and a half long—and this was in a digest-size zine. If it had been twenty pages, and described Rover's typical day in detail, and where it came from, and its hopes and aspirations for the future, I doubt I would have even finished the thing. I certainly wouldn't recall it to this day as one of the most chilling things I've ever read in fandom. [9]

One of the best regularly published fanzines around, TCTS's distribution is, like so many of the finer things in SF fandom, inversely proportional to its quality. In what other fanzine can you find a regular column on building model miniatures ("In Miniature" by Paul Czaplicki), articles examining early versions/unshot scripts from SF TV series ("Unshot"), fanzine reviews, SF news, fine quality fiction, an interesting letter column and many other fascinating contents all given a generous helping of fine artwork? Nowhere but in The Clipper Trade Ship. The Clipper Trade Ship derives its name from the fact that portions of the 'zine deal with the hobby of film clip and slide collecting. There are tips on care of film clips, a column on identification of Star Trek filmclips, and in each and every issue there's a free ad section for subscribers ("The Cargo Hold") where one can find ads for all sorts of goodies—filmclips, slides, books, fanzines, photos, clubs, bubble-gum cards—almost any SF collectibles. [10]

You never really know what you're going to get from one issue to the next (Voyage to the Bottom of the Sea, Star Trek, ST:TNG, Dr. Who, Blake's 7, original universe), but for a paltry $2 for 32 pages of reduced text, it is easily the best zine bargain around. And some of the ST-TNG he's been running lately is superb. If I find a Lorie Johnson piece in the table of contents, it's the first I flip to; and Linda Slusher's Klingon stories have been getting a bit of space lately. Okay, so Riker's not the most popular character, but a story in a recent issue found his mind being invaded by an alien—and I couldn't put the zine down. [11]