The Halkan Council 1 was published Dec 1974 and contains 10 pages. 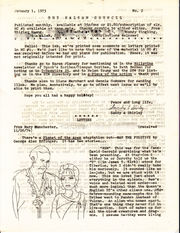 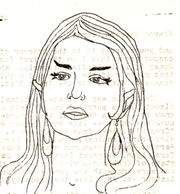 art from issue #2, according to issue #1, "The pictures were traced off of clips projected onto the wall."

The Halkan Council 2 was published January 1975 and contains 14 pages. The editors say they plan to go offset in the next issue. 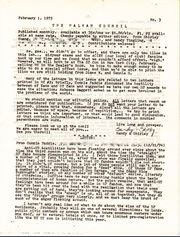 The Halkan Council 3 was published February 1975 and contains 14 pages. 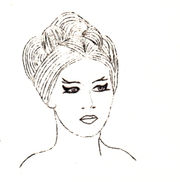 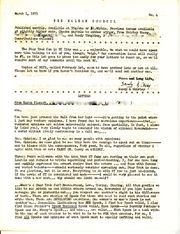 The Halkan Council 4 was published in March 1975 and contains 14 pages.

This is a letter zine. It has begun to pick up in interest in the later issues and already has several controversies raging. For those of you who aren't aware of what a "Letter Zine" is - They publish fans' letters written to them. The letter columns in other, irregular, fanzines lose some of their impact since by the time a heated retort is published the original question has been forgotten.

Also, zines like this give a chance for fans to publicly air their views on subjects without having to write a long article and send it around to find a publisher.

This is very definitely worth the expense for serious fans of Star Trek who like discuss the ST universe and characters (and ST fan universe too!).[4] 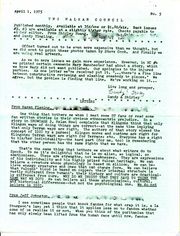 page of inserted art from issue #5 by Diane Marchant

The Halkan Council 5 was published in April 1975 and contains 14 pages. 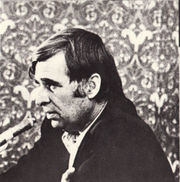 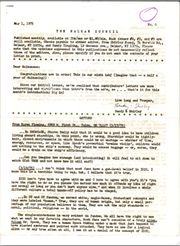 Halkan Council is a letter-zine containing mostly letters from fans, some of which contain original thoughts on ideas, and some contain rebuttal to letters from the previous issue. Some of the outstanding letters and comments of this issue are: Karen Fleming has some provocative ideas on the IDIC concept; Mandi Schultz discusses the Star Trek movie and use of the original cast; Paula Smith has an animated letter running the gamut from fringefans and trekfic to zines and zine reviews; and Shirley Maiewski has a letter to try to get straight the correct address for the STW which was printed wrong in STL!. Since that is important I will list it here to help keep the record straight- STL!, 481 Main St., Hatfield, MA 01038.

This issue is good reading, recommended.[5] 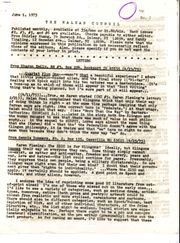 Outstanding letters of this issue include: Gennie Summers has some interesting conments on Karen Fleming's previous article on the IDIC; Eric J. Anderson has a short but important LOC on the problem of the v/eekly or miniseries develpping after the ST movie; Pat Gildersleeve has a rubutal on Karen Flemings previous letter ih addition to answers to other letters: Connie Faddis and Rebecca Hoffman have some good viewpoints on reviews and criticism: Paula Smith comes back with a letter looking at cons and how they are aimed at the public; Mandi Schultz has a number of ideas ranging from children on the Big E to the problem of landing parties and Gennie Summers replies to a few of the same topics and more besides. 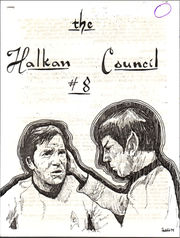 The Halkan Council 8 was published in July 1975 and contains 12 pages. It was the first issue to have art on the cover.

Outstanding issues in #8 include: A good piece of insight on how the Neilson ratings REALLY work by Claire Gabriel, whose family was a "Neilson family" for a week. Also, among other comments in her letter she has some good thoughts concerning Spock based on letters from HC #?. A few ideas concerning Spock & T'Pau and the Vulcan tradition make for intriguing reading in a few of the letters in this issue. Joan Verba discusses the topic of whether a new one-hour weekly series would be less effective than a mini-series. There aren't too many letters that have much of import in this issue. The major component of the reading concerns replies to letters in #7 and brief bits of news submitted just so it could be known to the fans.

There are 4 fanzine reviews, and one on the ST Blueprints from Ballantine. 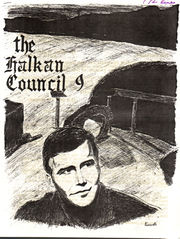 The Halkan Council 9 was published in August 1975, contained 22 pages and had a circulation of under 100. It has a front cover by Richard Ciccarelli. A handwritten note to an individual fan on one issue reads in part: “This is the longest Halkan we've ever done, hope you enjoy it.”

Some of the better letters of this issue include:

An absolutely-fantiscally-insightful letter from Diane Steiner discussing her views of Vulcan philosophy and how it applies to Spock. Congrats have to go to the editors for sacrificing the extra paper to print the letter since it is abnormally lengthy for a letter for HC. A must for Spock followers or buffs on philosophy. Sharon Ferraro discusses human hybrids and the problems thereof. Very interesting. She also adds a little more to the pregnancy/birth on the Big E. debate.

Jacqueline Lichtenberg also has a letter touching on hybrids but directs more of her thinking toward the other species at large too, such as.the Schillians. She also attacks the debate over Vulcans being part reptilian in ancestry, originally star ted by Alan Dean Foster in one of the STLog books.

G.M. Carr also,adds to the pregnancy/birth debate that has raged for about 3 is sues of HC now, and Connie Faddis speaks out on Kraith...which is always a deep,sub ject of discussion. There is an insightful book review of Star Trek Lives! by Carol Lynn, and fan zine reviews of 4 fanzines.

This is one of Halkan's better issues, if only for what Diane Steiner had to say in her opening letter. Recommended. [10] 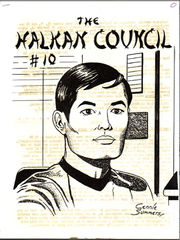 The Halkan Council 10 was published in September 1975 and contains 16 pages.

Cover by Gennie Summers. Outstanding letters in this issue include:

A little bit more on the intriguing question of Jane Wyatt and the plausibility of her portrayal of Amanda, discussed by Johanna Cantor.

Suzanne Cornwell discusses the "rift" that has seemingly appeared between older and the new neos flocking into fandom. A very interesting question that deserves much looking into.

Karen Fleming debates just about every major issue from the last HC raising a few new problems in the process. And we finally get a look at Jacqueline Lichtenberg's reaction to Carol Lynn's review of STLives!

Joan Verba has some good ideas on telepaths and their reaction with psi-nulls, also she has some great comments on the problems of a hybrid human/Vulcan explains as well as possible in non-technical language. If you think half-breeds occur everyday read this and you'll think twice, in fact it makes Spock quite a medical achievement.

There are fanzines reviewed in back, 4 of them in all and a Star Trek Fan Fund on the back page. This is an interesting issue of HC, recommended. [11]