flyer (address redacted) for the reprint of issue #1 that was included in Grup #4: "Now available... an unusually wholesome STAR TREK fanzine..."

It was "a unique endeavor by the enthusiastic brigade of the Galaxy Gazette."

About the Zine's Size 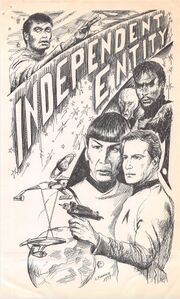 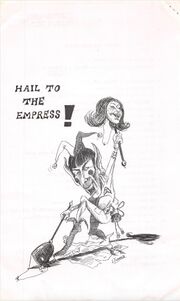 [aural clue: imagine the computer voice on the Enterprise] "Computer readout : A Trekzine featuring assorted items; i.e., bad puns, blurbs, fiction, lectures, hideous Trek exam, cartoons. Has story by Sharon Emily; art by Cara Sherman and Martynn, many others. Over 60 pages (legal size) (8 1/2 x 14); mimeo and offset. Mad creation; published on the 7th anniversary of 'Amok Time.' Has spicy Romulan story; permeated with Klingon flavoring; made palatably wholesome by Federation mellowness. QUESTION: Can 3 chief powers live together in same galaxy peacefully. ANSWER: 'Examine for yourself what co-existence means on a small scale first; what the ultimate results are; what kind of sanity (or lack such) exists between covers of 'Entity'! [1]

The tone is informal and friendly. The artwork... is plentiful, and of good quality. 'Appointment with Destiny' is set within 'The City at the Edge of Tomorrow' and comes across well. There's a continuation of 'Elaan of Troyius' and a touching Romulan tale. There are other interesting features: an article on Warp Drive, 'Dear Mr. Spock,' a ST test etc. and lots of poetry. Recommended. [2]

I think this zine was printed by mimeograph. However, for a first fanzine, this is a very good fanzine. The artwork seems to have been electrostenciled and some thought was given to its placement throughout the issue. The main artist was Leonard Fornalik who is fairly good. My main dislike in the appearance is that the pages are all legal-size (11 inches by 14 inches) which I personally feel is awkward to read. The printing is legible in all of my copy in spite of being a little light for my taste. This first issue runs 62 pages with the material matching the printing in quality.

The highlight of the zine are the three main stories. "Appointment With Destiny" by Sharon Emily is about Spock saving one of his ancestors from suicide while Kirk is off somewhere with Edith Keeler in the "City on the Edge..." episode. "Song for a Wildflower" by Psych Siegman is a continuation of "Elaan of Troyius" with her story after the ENTERPRISE and Kirk leave her to the Troyan ruler Dalon. The last story is "The Risk" by Lynda Martindale. A Federation officer deserts to the Romulans for personal reasons and winds up in love with a young Romulan officer. There is also a Star Trek Exam which is more than average difficult including a set of fandom based questions.

There is an article on Starship warp drives by Mark DiCamillo and a pseudo fact article of ST fans during the Eugenics Wars taking a spaceship and settling Vulcan along with some pointed-eared mutants. A few minor poems and a parody of Kirk's last orders in "The Tholian Web" (the "Mirror, Mirror" Kirk's orders in the same situation) complete the first issue.

Altogether, I recommend this fanzine for its contents and the efforts of its editors to put out a reasonably priced entertaining ST zine. [3] 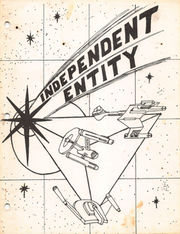 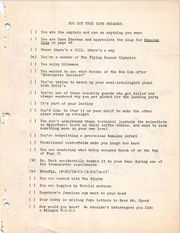 You are Receiving this Zine Because, from issue #2 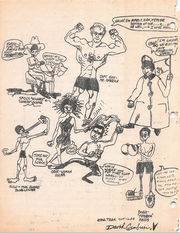 back cover of issue #2, David Cambrini

From the editorial: "Welcome to the long-awaited Christmas '74 ish! Sorry about the printing on many of the pages. Our machines died, and an appropriate explanatory eulogy can be found at the back of this zine. The ridiculous price of $1.75 causes a few red faces here, too! Expenses were quite a bit higher, like the slides to be blown up--19 slides at 70¢ each came out to be $35 ... which says something about the rate of inflation at our local camera shop... But the adventure... led to the Offset Experience-- and OFFSET is FUN! Nextish we'll definitely have more, since our stencil-cutter just died. We'll offset the covers, Mike Bunn's portraits, and probably all other artwork as well. At least they won't turn out like zebras like the pics on Pages 25 and 62! ...We hope the content makes up for the printing!" 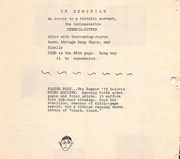 eulogy from the back of the zine

The cover is by Lyn Martindale, back cover is a page of absolutely hideous cartoons by Dave Cambrini. There are seven pieces of fiction inside beginning with a very interesting piece by Johanna Cantor, 'The Hearing,' which involves a little on women's rights. 'Destiny' is a strange piece in which a witch transports herself on board the Big E to find Spock whom she believes she loves... certainly not run-of-the-mill and certainly interesting. 'One the Bridge' is a poor attempt at humor that fails to do anything interesting to the reader except confuse and bore him... ' The Revenge' is a follow-up on the situation that was left off in 'Elaan of Troyius.' The story focuses mainly around Elaan and Kirk and poses what might be an interesting conflict for Kirk and even the Federation. Personally, I couldn't' give the story validity since Elaan just wasn't pictured the same in the show as in this piece. Another story 'First Command... Last Command' is short but powerful. 'Understanding' may have a point to make but it tends to get fuzzy and hard to sort out; it concerns the relationship between a ship's captain and a lieutenant trapped on a planet. Perhaps the best story in this entire zine is 'Stile's Dilemma.' It concerns another encounter that Stiles (from 'Balance of Terror') has with Romulans. This makes for a fascinating study of the character of Stiles and provides more insight into the Romulans. Very well told. The remainder of this zine is a collection of various fillers; crossword puzzle, directions for programming a computer game, a short description of the transporter, a few humorous short sections including two pages (one fold out) of pictures and bloopers with captions. This zine would be good for general reading if it weren't for the horrendous mimeo quality of the printing. You get to see everything from striped pages and hand-penned words to who sections of paragraphs that are obliterated. With these obstacles in mind, it takes quite a bit of determination to pick and struggle through this one. [4] 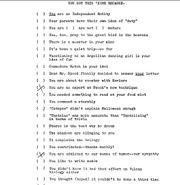 You are Receiving this Zine Because from issue #3 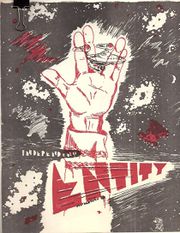 From the editorial: "We know--we promised a of a kind ' zine with #1. But isn't getting carried away by ideas part of what it's all about? So here's #3 in a of one, the last in one of those fashionable groupings, the trilogy. Like Tolkien, we feel three is a decent number at which to stop, before becoming dangerously addicted to the masochism of publishing--the mad typing, the gluing together of fingers, the creeping financial drain, all the fun, little madnesses that become more and more difficult to integrate into lives that need have at least a semblance of sanity. So, once again we promise, this is it."

It's a mixed bag of materials, some good, some forgettable. 'Duty of a Parent' puts the last patch on the Spock-Sarek rift in an epilog to 'Journey to Babel.' It's loosely paced, but being a Cantor story, it can't help but be entertaining. The story is enhanced by very good illos by Martynn... 'The Cure' is a post-'Turnabout Intruder' story in which the cure for Kirk's psychological problems is a female Commodore 'freezer unit' who just happens to have been one of the Federation's foremost vocal artists before she joined the 'Fleet. It's a pleasant enough story, and adequately written, but I can't say that I was very taken with the too-improbably heroine. The illos didn't add much, either. There's a funny, if overblown memo series... CB radio fans will get a few chuckles out of 'Star Struck' comix. 'Dual Dream' is a nice wish-fulfillment for Janice Rand... The mimeo is generally readable. Though there's noting really outstanding, the editors obviously enjoyed putting the zine together, and they're a good 45 minutes of lightweight entertainment here. [5]

The zine features a sprinkling of cute little cartoons.

Patti Cullen's "Federation Services" begins the pieces in IE3 and is a good laugh. It outlines the wonderful services available to the beleaguered planets within and without the Federation from your local meddling starship. "Duty of a Parent" by Johanna Cantor reads much too quickly, more like a story outline than a finished piece. Martynn's cartoons and illos to this story meld well. Diefenbach's "The Cure" presented the intriguing idea of a bunch of en gineering cadets serving aboard the Enterprise while Kirk is recovering from being Janice Lester. "The Memo Series" and "Dear Mr. Spock" are silly and, to my taste, insulting and over-familiar. "Hair of the Dog" is aptly titled—book reviews by Jacqueline Lichtenberg, tho I recommend The Exile Waiting (Vonda Mclntyre, Fawcett Gold Medal, #P3456, $1.25) over everything else she mentions. "A Time for Departure" by Martindale is obscurely written, more like an "Afterword" in a novel than a story by itself. "How to Command a Star- ship" is as good as Pat Cullen's opening piece—Admiral Kirk's tips on command. "The Masquerader" reads like an outline, with a simple plot and little characterization.

"Star Struck: A Con—Oy!" is a comic type piece on the Big E's journey to Toronto ST '76 and a CB-type encounter. Psych Siegman's "The Step" is laid out badly (senten ces running thru the illo, jumping from one side to the other. This pastiche deals with a^non-conformist Vulcan who writes a letter toa.young friend about living under a repressive system...onVulcan. "DualDream"by Karen Klinck is a sketch of Rand & Kirk, long separated, dreaming of each other.

Appropriately, this issue winds up with a "torment" story. Amanda agonizes over the fact that Spock has finally bought it on some forsaken planetoid.

Overall, not bad, but nothing especially outstanding. Ratings: Graphics 2; Content 3; $ Worth 3. [7]