A stencil is the first step in the method of printing mimeographed fanzines. A typewriter cuts letters into a wax paper, which leaves in effect a negative space. When the wax paper is placed onto the rolling drum of a mimeograph machine and ink is applied, the stencils create readable text as they are imprinted onto the zine paper. Some stencil machines were electronic and could punch text for multiple copies at a time. Most fans could not afford an electronic stencil machine and made do with manual typewriters and stencil paper. Errors could be hand corrected with Corflu.

Artwork could also be created with stencils using a similar method. The art - usually a line drawing - is etched into the wax paper. Some artwork was hand stenciled using a utility knife, while others were done using an electric stencil that could be used to burn the paper very much like a woodcut.

an electric typewriter with stencil paper. Note at the bottom the bottle of Corflu or correcting fluid and the small plastic orange shapecutter that could be used to cut commonly used shapes and symbols by hand. Image Source: Dek Skin's History of Fanzines

The life cycle of a stencil could be short - or long - depending on the materials and the mimeograph machine used. When stencils wore out a zine publisher had two choices - re-stencil the entire zine (with artwork) again by hand - or cease publication.

Stenciling also required attention be paid to the white spaces in a zine, or run the risk that the wax paper would fall apart if letters were cut out too close to one another. Often glue was needed to hold the stencils together.

In 1977, Louise Stange explained stencils to Leonard Nimoy who had come to her house to see how she put together the LNAF Yearbook. From that year's yearbook:

… we went over to the electronic stencil machine, and ran a test stencil to show how it operates. The machine cuts the stencil using a tiny regulated spark and i minuscule wire which emits the spark. The electric eye picks up the varying shades and translates the information via circuit boards to the stylus control. This, in turn* transmits the bursts of energy and burns a regulated hole in a special chemically prepared stencil. All this is going on while a large drum containing the original art and the special stencil is rotating at a very rapid speed. This is the method used to reproduce artwork to the stencils in preparation for running on the mimeograph.

In 1982, in issue 33/34 of the S&H letterzine, Barbara Green Deer described the various printing methods in her article: "Zine Publishing: Choice of Medium.":

In mimeo reproduction, ink (usually black, but can be other colors) is forced through a screen which has been cut out in the area of the copy, generally by being typed on. The ribbon of your typewriter is disengaged when you cut a mimeo stencil, so that a crisp, clear image is cut into the stencil. Some schools and churches (or fans really into mimeo) own electro stencil machines. This machine will produce a mimeo stencil from black on white copy much as a Thermofax produces a ditto stencil. This allows for the use of original artwork instead of art which must be drawn directly on the masters.

Burning the stencils was one way to ensure that there would be no further reprints of a zine, at least in the original form. As affordable photo-copying was still years away, this meant that, aside from the photostat mentioned above, new copies of this zine would be nearly impossible to recreate. 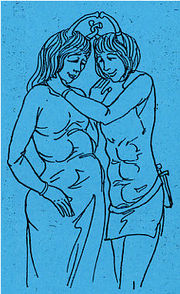 "Never and always...the endless sessions at the typewriter
Touching and touched... the stencils and typewriter keys
Parted from me and-never parted....money and the typewriter
I await thee in the- appointed-place-the-duplicating and the deadline...