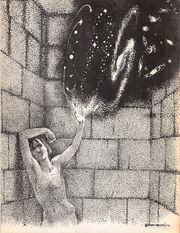 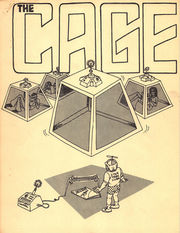 The Cage is a gen Star Trek: TOS con zine. It was a special project--printed and collated during the course of Sekwester*Con, Too (May 1977) as a give-away to the con attendees. The zine is 41 pages long. It contains 14 stories, poems, and some non-fiction.

Many people were interested in how to make their own fanzines, so Jeff, the editor of the zine Spectrum, volunteered to create the zine The Cage at the con so that those attending the convention could see a mimeographed fanzine being put together before their very eyes.

It took all four days of the con. "The result was 41 pages, printed on Jeff's machine. There were a variety of contributions—stories, articles, satires written under pseudonyms (one of which was "Su Do Nims"), plus an honest-to-goodness Mary Sue story."[1]

I am not responsible.

South Vulcan terrorists grabbed my suite and chained me to the typer forcing me to perpetrate this mimeo monstrosity upon the membership. No, the fault lies with the 170 magic fingers of the typists, the slipsheeters, and the mastermind, namely Jeff Johnston, Jan Rigby, Devra Langsam, ((etc etc)).

Do not blame me.

The details of how this all started have somehow become fuzzy and faded in memory. I think that the original idea was to produce a fanzine at the conven tion. This has been done before at SF cons but never at Strekcons, and it sound ed like fun. Little did we know (we being Jeff Johnston, Jan Rigby, Melissa Bayard and all of the other crazy people that have helped with this fiasco) that this would involve so much work. The organization behind this fanzine did leave something to be desired but we have been able to muddle through desprte our prqb lems. There have even been suggestions that we do this again...on a regular basis. Good Ghod...a floating conzine crew! Heaven forbid that such a monstrosity should ever catch on.

Among other things this zine is intended to be a personal momento of SeKWes- ter*Con. There v/ill be no reprints of this zine, and only a few extra copies for the supporting members, fen who didn't show up, and for the few who had to leave early. After this has been printed the stencils v/ill be burned, forever eliminating even the slightest possibility of a reprint. (Amen.)

Since this is a limited edition the possibility of this becoming a collector's edition one day. Even if you wouldn't grace your garbage can with this thing, you still might be able to make a few $$ off of it in a few years, so it won't be a total loss. (Some people will buy anything).

A Taste of Being There

The editor wrote of how hot the room was, how the door was propped open allowing insects to come flying in, the constant chaos of people coming and going, the long-distance phone calls made, how they almost ran out of paper, that by Sunday night at 9:00 they were still only running off the stencils and people were starting to leave the con to go home, the page numbering was off, the art was printed too lightly, and other general madness:

Monday morning was the ceremonial stencil burning... After some searching, our motley crew managed to find a garbage can lid to burn the stencils in. Interestingly enough, stencils burn with a ferocity that is surpassed only by that of napalm. Paula suggest that it might be an omen or something to do with the contents of the zine... Just think... all of the stencils I have stored in drawers and boxes, one spark and it could all go up. Spontaneous fafiation. As an afterthought, it had been suggested that there are probably offset zineds who would have given anything for a film of the chaos that we experienced for the final six hours of that Sunday night... even a half an hour's worth would have been enough to convince any would-be fan publisher that mimeo zines are just not worth the trouble... The total bill for the zine was $42.02, not including the covers. We wound up with 225 copies, each with 44 pages... We still had to try to give copies of the zine to each person present and cross their names off the list of the people in attendance... Once we announced that the zine was printed and ready to hand out, the fans that were still around seemed to crawl out of the woodwork.. When it seemed that everyone up had gotten their copies, we closed our doors. [2]