The editor remembers: "I have fond memories of the first zine I ever did -- a little Star Trek zine called Tal-Shaya which ran about 50 pages (non-reduced) and which cost me $200 to have printed." [1]

The art is by Cheree Cargill, Katy Wilson, and Kay Bradford. 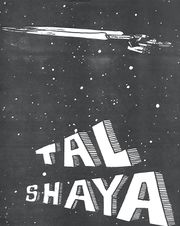 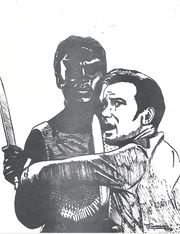 back cover of issue #1, Cheree Cargill

In an ad in A Piece of the Action #8, the editor writes: "I don't think anyone will be too disappointed in it."

This is a very old story, written in college with a friend of mine at the time, Kay Bradford. I haven't heard from her in nearly 40 years, so I hope she won't mind my posting this here. It appeared in the very first fanzine I ever did, so it's pretty amateurish. But even back then, we saw Spock and Christine together. [2]

It was edited by Laura Virgil and Cheree Cargill. 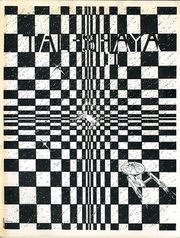 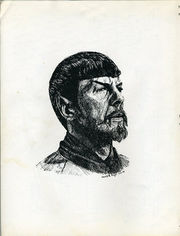 back cover of issue #2, Laura Virgil

Compared to Tal Shaya #1, this issue doesn't make the same impression, but it is still a good issue. The reproduction tends to fade in parts, nothing too serious. The worst mistake in make-up is that the cartoon section is printed too close to the edge of the paper, making it difficult to re-bind. Cheree had this problem in the first issue, and it is to be hoped she can solve this before the next issue. The contents ran from good to horrible. There is a story ('Charisma') by Cheree that read very well, but could have used a touch more tension. The title character comes out slightly flat. The small cartoons are funny, though not classics. The large cartoon section ('Star Tripe') by Robert Faires and Len Calder was terrible. It tried to cram too much into too little space and ended with a fussy, over-crowded appearance. There were some funny lines it, but they tended to get lost. The artwork was generally very good, and I fell in love with the frontispiece. My only complaint is that you could go blind trying to find the title on the front cover. Over all, this is an enjoyable zine unless you are a very picky reader. [3] 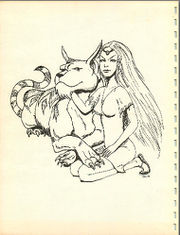 backcover of Tal-Shaya #3 by Chree Cargill 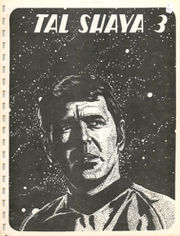 It was edited by Cheree Cargill and Laura Virgil.

See reactions and reviews for How Long the Night, How Bright the Stars.

[I'm Not Dead Yet]: McCoy is suffering and hiding his xenopolycythemia symptoms, while his lab crew is working on some mysterious experiment - which, of course, turns out to be the cure, revealed at a party for him. Nice little vignette. [4]

[A Touch of Love]: Despite McCoy's insistence that Spock is brain-dead after an encounter with the mind-sifter, Chapel demands to accompany Spock to a hospital on Vulcan, and convinces a telepathic healer to keep trying for contact, which ultimately succeeds in recovering his mind from its retreat. A little sappy, but an okay read. [5] 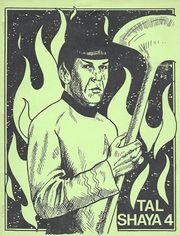 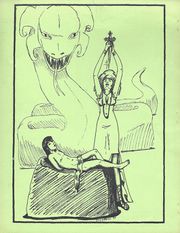 back cover of issue #4, Cheree Cargill

It was edited by Cheree Cargill and Laura Virgil. 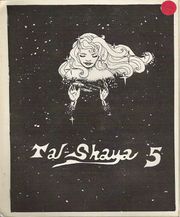 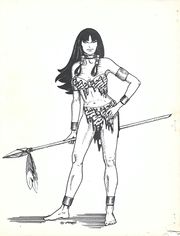 back cover of issue #5, Laura Virgil

Tal-Shaya 5 was published in December 1978 and contains 90 pages. It was printed offset.

First and foremost, I must apologize and thank all of you who have waited so faithfully for this issue of TS. It is grossly, grossly late and for that I am very sorry.

This will be the last issue of TS. Although at the outset in 1972 I planned to publish indefinitely, in the past year or so, my interests have turned away from ST to more real and important concerns. Compared to the real world and the needs to be found there, Star Trek suddenly seems very trite and silly. I have not turned to other forms of fandom, say of Star Wars or Battlestar Galactica. Each are nice forms of escapism, but are only that. As of this issue, I will be out of fandom, probably for good. I will still on occasion illo or write for a friend's zine, but those occasions will be few and far between. Perhaps I had better limit that to illo as I no longer have enough interest in the subject to put words to paper.

That all sounds very glum, doesn't it? Well, afraid I'm in a slightly glum mood right now. Maybe not glum, exactly...subdued, I guess. Just no longer able to get excited about it all. I'm not the same person who started TS six years ago. I've gone· through a few hard knocks since then and it has matured me. When all this started, I was a single, 19 year old college student. My main direction in life was to get that degree. Well, I got it in 1976 and wandered mentally for a year unable to decide on a direction. Slowly, but surely, things have fallen into place, although the falling has not always been easy. I am now 25 years old, still not over the hill, but what I consider at the beginning of my prime. I've been married for over three years now, still not a great length of time, but enough to settle into a routine and enjoy the security my marriage gives me. I still dabble a bit in school, but it's mostly for my own pleasure. I would not hesitate to quit if it jeopardized my career. I'm a word processing secretary and a darn good one. I enjoy my job, if not the company I'm presently working for, and I plan to be commanding some big money one of these days. The biggest change, though, and the one that has prompted me to give up fandom is that this year, for the first time, I no long­er feel like a kid. I went through a very traumatic job loss earlier this year and emerged from it with a kind of grim maturity that no longer left room for fandom. I still enjoy science fiction and probably always will. I'm still a film buff and enjoy a good old sci-fi movie, be it Star Wars or Earth vs. the Flying Saucers. But that does not mean that I will mindlessly devote my whole life to it, as I did for many years as a Trek fan, I have found myself and I no longer need Mr. Spock to give me a reason for existence.

I thank you all for your loyalty to TS and for sticking with me over the years. 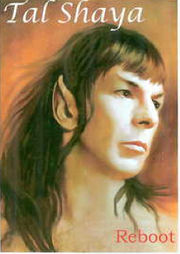 Tal Shaya Reboot was published in 2012 and contains 145 pages. It was printed photocopy, GBC bound.

The art is by Kaz and Laura Quiles.

It contains some adult themes, but no same sex material and nothing is explicit. This is a gen/het zine with a general rating of about GP-13. Most of the stories revolve around Spock and Christine, although there are more general ST stories, too.