How Long the Night, How Bright the Stars

How Long the Night, How Bright the Stars is a Star Trek: TOS story by Mandi Schultz & Cheryl Rice. 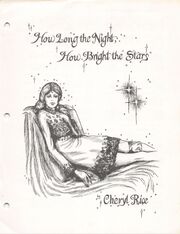 art by Gennie Summers, printed in The Other Side of Paradise #2

It was published in the print zine Tal Shaya) #3 and The Other Side of Paradise #2.

The Diamonds and Rust Series Series

See the story order as they were published, and as they took place at Diamonds and Rust Series.

Diamonds and Rust: The Story So Far...

JUST previous to "How Long the Night, How Bright the Stars", Chantal Caberfae has been assigned--or in some mysterious fashion chosen to be assigned--to the Enterprise as its first female Security Chief, her predecessor having just been violently dispatched by a nameless alien. Much is made of the Enterprise's reputation for being "in the thick of things," largely due to the character of her captain, the somewhat notorious James T. Kirk. But this, it seems, is precisely why Chantal wished this particular assignment. The lady has her own mission, which seems to have nothing to do with that of the Enterprise --but what it might be remains a mystery to us, save that her contacts are Commodore Paul Caidan and an enigmatic superior called simply Todmeister, who seems to be generally masterminding whatever she is up to. The fact that his name translates out of the German as "death master" makes him seem a cross between J. Edgar Hoover and Heinrich Himmler, and Chantal, by association, a space-age Mata Hari.

Or is she? As the story progresses, she begins to alternately charm. mystify. aggravate, and embarrass the various Enterprise offi­cers. Upon satisfying herself that the new Security Chief isn't attracted to Spock in the least, even Christine Chapel befriends her. Spock is instantly disapproving and his attitude intensifies with time. McCoy, although amazed by some of her methods for whipping a sloppy Security department into shape, is quite impressed by shape. Kirk is nonplussed, irritated, begrudging, admiring--and in­creasingly attracted to her. Chantal herself, although quite criti­cal of the way he runs his ship a lot of times, finds Kirk himself likeable--and perhaps more, despite the first impression that he is short and overweight. The seeds are sown, the stage is set--James T. Kirk and Chantal Caberfae are almost fated to fall in love with each other. The fun will be in finding out how they manage it, since half of the time their verbal fencing seems likely to wound one or the other beyond repair. And then, there is that mission of hers...

She sets to work immediately revamping the Security Dept., hold­ ing training exercises in the Enterprise-at-large. in the course of which she manages to inadvertently break another officer's back. This does nothing to endear her to Kirk, who isn't sure by this time if she's an inexperienced young zealot or an extremely clever spy, let alone who she might be spying for. In fact, some of his reactions-­ to her in particular and to everything in general--are beginning to worry McCoy a great deal. Kirk seems to be yielding to the myriad pressures of his job and the signs are becoming more and more evident -- and will be eventually to everyone on board. But he repels the Kzinti attack with his usual verve and aggressiveness and competence, perhaps even brilliance. So does Chantal, who is decorated for her part in it. In the attack's after math, she and Kirk share a moment of understanding in contemplation of the compelling beauty of a rare antique, an alien objet d'art known as a Jenkers Prism. By this time she has ceased to remind him of the ultra-efficient Spock and is cal­ling up suppressed memories of an old love -- Edith Keeler -- whose offer to help, and his need to hear it said, have never left him. [1]

Reactions and Reviews: "How Long the Night, How Bright the Stars"

Superspy Chantal Caberfae is recovering in Sickbay from a knee injury and a life-threatening reaction to a painkiller. She holds court, telling stories, until Kirk arrives and scares everybody off. McCoy, disturbed by Kirk's recent displays of foul temper, manipulates Kirk and Chantal into therapeutic conversation with one another. Not a lot of point to this one, but then, there doesn't have to be. The writing and characterization, as always, is good, though still waxing eloquent over figures and wardrobes. [2]

["How Long the Night, How Bright the Stars" and "What Memories Can Bring"] ...there are two "Diamonds and Rust' stories, which were highly recommended to me, but which I found to be contrived and not in character — sorry, but that's the way I feel. The first story was illustrated sparingly with drawings by Marty Siegrist and the second was also illustrated sparingly, but the artwork was done by Gee Moaven. for those who don't know, the "Diamonds and Rust" stories revolve around Chantal Caberfie, a Capellan woman who's also the Enterprise's new Chief of Security, and Kirk. However, these two stories have little to do with that. [3]