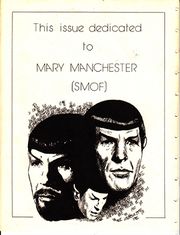 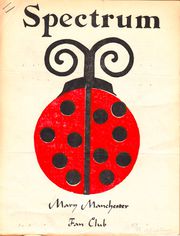 Mary Manchester was an influential Star Trek fan in the 1970s.

From Boldly Writing: "Mary Manchester deserves special mention at this point. She appeared in few publications, yet she had such an influence on Star Trek fanzines that many considered her a SMOF, or Secret Master of Fandom. Mary... would give advice and encouragement to a number of fanzine editors. Her fanzine recommendations were considered seriously by many fans, and her fanzine criticism was considered thoughtful and constructive. She spent many summers appearing at convention after convention, where she maintained contacts with Star Trek fans all over the country (and outside North America as well). A number of editors dedicated their fanzines to her, and she was very well known among those who read fanzines in the 1970s although her Star Trek activity gradually declined in the 1980s."