Archives is a gen Star Trek: TOS reprint anthology with seven issues. The front covers are all by Hans Dietrich.

From the editorial from Archives #1:

I got hooked on STAR TREK, and shortly thereafter on ST fandom, a little over four years ago. In many ways, therefore, I am still a new fan, and always will be. But I remember—in fact I still experience—the joy of realizing that there is "someone out there." Hence, Archives -- May it help us "reach."

Archives will be largely a reprint zine, but I do hope to run features of interest to "new fans," and fans in general. In some cases (as with "Nessie" and "Le Coeur") I may include something in print, just because I like it specially. A question for my artist friends: often the original illos to a story are long gone—sold, and otherwise unavailable. In such cases, would it be feasible to reprint that art, when a story is reprinted? I am not, of course, asking for any blanket permission; each work would be discussed with the artist, and permission obtained. But what are people's thoughts about the advantages of having some things made available again, as against the probability that there will be some loss of quality? In this issue, by the way, permissions arrived too late to get "Nessie," "Intrepid Incident," and "...Handful of Snowflakes" to the artists. This was not in the least the artists' fault; in fact, I want to thank them here for outstanding cooperation and promptness as well as the quality of what they've done. I could have held up the issue, and perhaps I should have. But after years of frustration as a fan, I tend as an editor to be more invested in appearing reasonably on schedule, instead of waiting so everything can be just-so. I regret the losses this sometimes entails.

Many thanks to the authors reprinted here, to Linda Cappel, to the editors of the zines represented, and to the many people who wrote with encouragement and suggestions. Please let roe know what you would like to see reprinted in future issues. Authors: are your stories out of print? Let me know. Don't let modesty stand in your way—I don't.

From the editorial from Archives #2:

A zine for the new fan, featuring reprints of out of print (or hard to get) stories, and showcases for new writers and artists. As before, my thanks to the authors, artists, and editors who allowed their work to be reprinted here, and to those who submitted new 'early' stories... As before, I am acutely aware of the deficiencies of the zine. As I said (and will probably keep saying), after years of frustration as a fan, I tend as a fan editor to be more invested in bringing out a zine out reasonably close to schedule than in waiting for problems, such as my schedule, to clear. I sincerely regret the loss of quality this sometimes entails, but there it is.

From the editorial in R & R #5, the editor reiterates the plan to attempt to print the stories that had been mentioned or discussed in Star Trek Lives!:

It turns out we're not going to be able to do what we hoped to do with the first issue of ARCHIVES. We can't print all the stories mentioned in ST LIVES because too many of then are in print or planned reprint by their original printers, who would understandably be unhappy at having them appear elsewhere. What we will try to do is print the ones that are really unavailable, and give current information on where the others can be found. Future issues of Archives will continue to print OP stories, to make them available to new fans. Suggestions are welcome—we're starting a file. We also want to feature first stories, to give new writers a start.

The illustrations are by Hans Dietrich and Carrie Rowles. 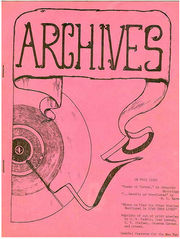 See reactions and reviews for Domestic Scene With Sehlat.

See reactions and reviews for Nessie.

See reactions and reviews for Tower of Terror.

[zine]: This is the long-awaited reprint 'zine, and some of the best (but now out of print) stories in fandom have been selected to appear. You've probably heard of most of them, so I'll just list some names - Tower of Terror by Jennifer Guttridge (with superb illos by new artist Hans Dietrich), The Price of a Handful of Snowflakes by M. L. "Steve" Barnes, Domestic Scene with Sehlat by Jean Lorrah, Claire de Lune by Faddis (originally printed in TOSOP #1), and others by Frankie Jamison, Gerry Downes, D.T. Steiner, Cheryl Rice, Caroline Nixon... aw, hell. Read it for yourself.[1] 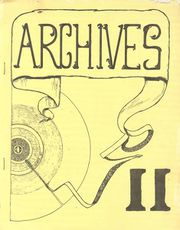 Archives 2 was published in Summer 1978 and contains 82 pages.

As before, my thanks to the authors, artists, and editors who allowed their work to be reprinted here, and to those who submitted new "early" stories. Keep it up! Also, as before, I am acutely aware of the deficiencies of this zine. As I said (and will probably keep saying), after years of frustration as a fan, I tend as a fan editor to be more invested in bringing a zine out reasonably close to schedule than in waiting for problems, such as my schedule to clear. I sincerely regret the loss of quality this sometimes entails, but there it is.

[zine]: Eight good stories, five of them reprinted, three new ones. "Alternative Intrepid Incident' was very well-written. Kirk wonders how Spock can actually feel the deaths of those aboard the Intrepid and Spock agrees to let him experience it just briefly through a mind meld. He starts with the death of an insect and an animal. 'Paternity Order' is one I enjoyed for its sense of humor. There's a baby born on the Enterprise and it's got pointed ears! There's a good Sulu story called 'The Hunter and the Hunted' and a nice short McCoy and Spock story called 'Last Tag.' The zine is well-illustrated by Connie Faddis, Susan Ceci, Carrie Rowles, and Sharon L. Parkos. Recommended.[2] 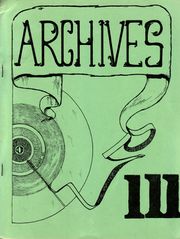 cover of issue #3, by Hans Dietrich

Archives 3 was published in Summer 1979 and contains 94 pages.

See reactions and reviews for Get That Lollipop Out of My Computer.

[zine]: This issue contains stories from Impulse, Berengeria, IDIC, and Menagerie. It also contains two showcase stories, first stories by new writers. These are small pieces and both are explorations of Spock's character: both are quite good.

But the best feature of the zine is a five-page "letter" from Susan Stephenson, one of the lucky fans who is in "Star Trek: The Motion Picture." Reading her detailed description of what it was like to be a part of the Enterprise crew, even if just for a day, is almost as good as being there.

A real bargain and highly recommended.[3] 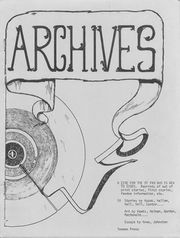 Archives 4 was published in the spring of 1980 and is 64 pages long, reduced offset. The front cover is by Hans, the back cover by Evallou Richardson, title art by Bev Zuk.

ST:TMP has induced a mood of contemplation, even nostalgia, in many of us fans. This is as it should be. The fact that the movie exists is a tribute to us. It is a time to remember, to assess, and to give ourselves a pat on the back.... I had occasion to call a fellow fan the night the Iran hostage crisis was breaking. "Do you realize we're on the verge of World War III?" she demanded. "We're dancing on the edge of a volcano!" "Well," I said (I was in that kind of a mood that night), "if we have to live on the edge of a volcano, for heaven's sake, let's dance." This issue of Archives is dedicated to all the fans, both the dear friends I know and the readers I have never met, who dance with me - to the music of STAR TREK. May your distance never increase. Archives IV is the last in the originally planned series of Archives. I hope to continue with it, more or less in this format (though suggestions are welcome). What I won't do again is box myself in with subscriptions. That, incidentally (this is an apology) is the reason for the greater reduction of this issue. But what covered printing and mailing in 1979.... need I elaborate? As always, comments are welcome. What do you think of the reduction? Of leaving no space between paragraphs? What would you like to see in future issues? More reprints? Of what? More neo stories? More essays? Authors: don't be modest. I'm not (oh, you noticed?). If your good stories are out of print, send them in. When good fanlit is not available, we all lose. 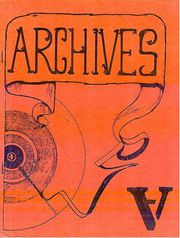 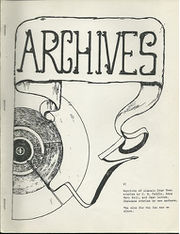 Archives 6 was published in spring 1982 and contains 72 pages.

The editor includes a number of contacts for fans to find out more about the United States space program and includes this:

Space Support by Phone President Reagan's Comment Line is 202 456 7639, manned only 9-5 Mon - Fri, Eastern Daylight Time. 202 224 3121 is the central switchboard which will switch you to the office of any senator or representative. If you prefer talking to writing and have the money, more power to you. Telegrams can be sent by Western Union--look up the local office in your phone book. A 20-word public opinion telegram costs $4.25, billed to your phone. A mailgram is 50 words for $3.90.

The editor also includes an apology for this issue being a year late:

...I want to apologize specifically for the delay in getting this issue out (I started planning it in spring, 1981), and for a length that's slightly under what I'd planned. The last lands squarely on the post office. One of the wonderful people who help with typing mailed me a photo-ready manuscript, along with the original, at the end of March. It has yet to arrive. I waited, hoping it would turn up (after all, the author, like the other authors here, had been waiting almost a year to see that story in print), but have finally decided, painfully, to go ahead with what I had, so as not to keep the authors and the people who sent orders on the basis of my Feb. flyer waiting any longer. So, sorry. This issue is slightly overpriced, and will probably be mailed for less than the estimated postage. The NEXT issue will be bigger, and slightly underpriced. In buying 6 at the flyer price, you're making a small contribution to 7 (almost everybody who orders ARCHIVES at all routinely buys each issue, so I don't think too many people will be cheated). Thank you!

Apropos that spot of unpleasantness, PLEASE KEEP A COPY OF ANYTHING YOU SEND THROUGH THE MAIL. I'm very careful with manuscripts; I think all editors are. But we can't control the post office. And unlike some editors, I don't have access to free xeroxing, so I try to keep it at a minimum. You don't have to pay for xeroxing either-—there's a marvelous invention on the market which is true state of the art when it comes to making cheap copies. It's called carbon paper. I've learned to make a carbon of any fair draft, on the same quality of paper I use for top copies. This produces a clear, crisp copy which will, if worst comes to worst, xerox acceptably (sorry if I'm soapboxing. I just finished writing the author whose story was lost—maybe you think I enjoyed that?)

As far as I know, I am reasonably caught up with Yeoman matters. If you're waiting to hear from me on anything going back before roughly April, 82, please write to me about it; I'm afraid some things did get lost in the shuffle.

See reactions and reviews for The Gardener's Craft.

See reactions and reviews for Parted from Me. 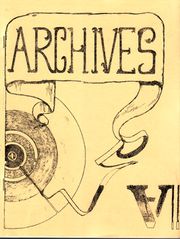