You may also be looking for the Star Trek:TOS zine Beta Niobe. 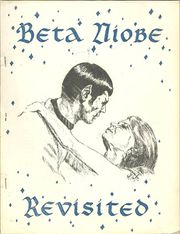 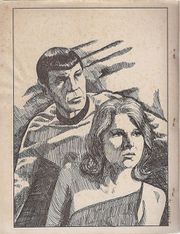 back cover by Signe Landon 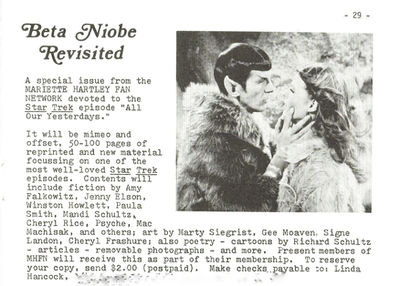 Beta Niobe Revisited is a Star Trek: TOS 98-page zine of articles, art, and fiction focusing on the the episode "All Our Yesterdays," and the character of Zarabeth.

Note: It is not a sister zine to Beta Niobe.

The following literary and artistic creations revolve more or less around a central theme having its basis in the character of Zarabeth, played by Mariette Hartley... Whatever happened to Zarabeth? What did she do, what did she think about, after Spock left her to continue her exile? they exhibit varying degrees of optimism, and will appeal, we suspect, in ratio to the reader's bent toward idealism. Some focus solely on 'future past' -- why was she sent there? Others touch on both aspect. Some are from Spock's point of view. A warning -- you'll find as many Spock's as Zarabeths in these pages, and he'll be everything from an anguished lover to an unbearable prig, just as she will range from long-suffering injured innocent to scheming Messalina... Generally speaking, this is an anthology of everything we could dredge up or force out. It's the only "compleat Zarabeth" we know of. It is an attempt to both collect the given and explore the possibilities that were left. It is also, in part, an excercise in pure whimsy and self-indulgence. It's for fun. It's for you. We hope you enjoy. 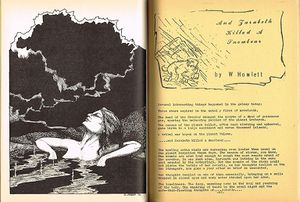 inside page, art by Signe Landon 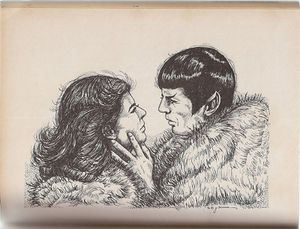 inside art by Gee Moaven

[And Zarabeth Killed a Snowbear, 1983]: About your reference to Spock and Zarabeth, there is a story like that. It is called "And Zarabeth Killed a Snowbear...And With a Very Good Reason" or something like that. It was written by Winston Howlett (a guy who is very opposed to K/S, by the way) and it was in that zine years ago which was all about Zarabeth. Sorrv I don't know the name. I've also seen it elsewhere, maybe Winston's zine, "Probe". This was all a long time ago. And the one time I met Winston, he and I had a semi-argument about K/S, (he said, "Oh, you are one of those!") but it is a very sweet story. [1]

[zine, 1977]: Mostly mimeo, some pages with offset artwork, full-sized type. It includes stories, poems, articles, and artwork of varying quality, but all related to the Zarabeth theme. It is a novel idea, and the editors have done a good job of putting it all together. Obviously, your enjoyment of this zine will depend on your feelings about that episode. If Zarabeth is one of your favorite ST characters, you should love it. However, if you're lukewarm to downright cool about 'All of Our Yesterdays,' the repetition of the same theme for 98 pages -- well, it speaks for itself. Personally, I enjoyed it.[2]

[zine, 1977]: To prepare myself for the chore [of reviewing this zine], I first managed to watch 'All of Our Yesterdays' for the first time in years. I was reminded of two things: first, what a poor episode it was, and two, how attractive Marriette Hartley is. My research done, I plunged into the zine proper, and all I can say is that editor Rusty Hancock certainly did all that is humanely possible with the subject matter. The zine is billed as the 'compleat Zarabeth' and that it certainly is. Since the subject matter is so limited, it might be a good publication to read one or two pieces at a time rather than straight thru. Most of the fiction pieces have appeared elsewhere and most show that there are a few romantics out there: 'Fire and Ice,' For a Few Minutes Longer,' and 'Zarabeth Killed a Snowbear.' In a different vein are 'After the Stars are Gone' by a friend of the editor who doesn't write as well as she apparently thinks she does and 'Fountain of Sorrow' which is a sort of historical fiction/sword & sorcery tale. Ending the fiction section is a real live Paula Smith parody. This one is up to her usual high standards... There's a poetry section which is rather bereft of first class poetry. This topic seems to bring out the marshmallow in people. The poems center on lost love, abandonment, death, and other related cheery subjects. I must admit that none of it was really bad, and if seen by itself, each poem would probably not be as sickly sweet. The artwork in the zine is almost uniformly excellent, especially that by Marty Siegrist. Unfortunately, the reproduction in my review copy was spotty in places and some of the illos suffered. Along with all of this is an interview with Ms. Hartley, detachable photographs, and a plot summary of the episode. Even readers who don't care much for Zarabeth should find it interesting to see how differently a topic can be treated by various artists... To sum it up, BNR is worth the money, $2 for a 100 pages zine is practically a steal.[3]

[zine, 1977]: I have to admit that I was quite surprised to receive what is virtually a collection of high compliments from HOP. Must come from all my clean livingI still feel defense about it all -- BNR was our child, so to speak. 'All of Our Yesterdays' was basically a love story... and bound to inspire poetry and prose in the same vein -- by the same token, being a love story with a sad ending, it was bound to inspire a variety of after stories ending in the same way. I defend it almost down the line, with the exception of most of the poetry since there is a definite paucity of poetry that appeals to me in any area. I felt that a lot of it was appealing to the readers. We've had some very flattering responses to this zine from people who purchased it separately. The comments were from club members who got it as a special issue in their membership were rather interesting, tho. An awful lot of those souls are not Trekfans and most of them, while they said they enjoyed it since they had it, said they could have just as happily lived without it... Ho hum... We enjoyed doing it and despite its rather obvious flaws (mainly in layout and, alas, in some of the art repro, we're rather proud of the whole thing.[4]

[zine, 1977]: One reviewer wrote: "The art is outstanding and some is offset. The mimeo is clear and readable. Most of the material is reprinted from other 'zines. The quality of the writing is generally high. The stories explore various endings to the Zarabeth stories, as well as a couple of "before" stories. If you liked the 'All of Our Yesterdays' episode, you'll probably enjoy this. A good buy at $2.00." Another reviewer said, "I couldn't agree more, though I wouldn't rate the fiction as high." [5]