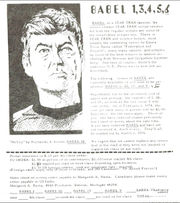 The first two issues are mimeo, the others are offset.

The fanzine, along with 12 others, became the subject of Paula Smith's satire in Menagerie #4. 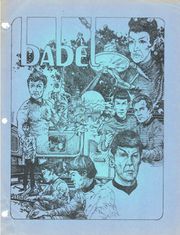 The entire content of this issue is reviews of Star Trek scripts: how they read, how they differed from what was filmed, how different revisions stacked up against each other. 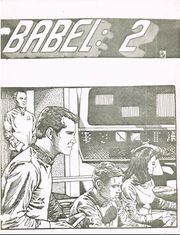 Babel 2 was published in January 1972 and is 102 pages long. It was edited by Laura Triste Basta and Margaret A. Basta. Assistant editor is Carol Lynn. The art is by Terry Austin (back cover, interior), Laura Basta, Margaret Basta, Kucharski (front cover, interior), Randy Bathurst, and Lee Healy. 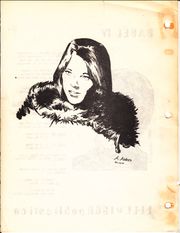 back cover of issue #3, Alan Andres 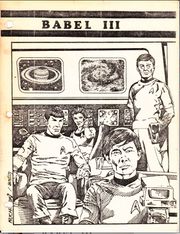 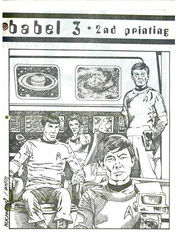 Boldly Writing states that: "There were two notable items in this issue. One was Laura Basta's latest installment in her Federation and Empire series. The other was Jacqueline Lichtenberg's "In Defense of T'Yuzeti." This article came about because in her Kraith series, Jacqueline presupposed that Sarek had married (or at least mated) before Amanda came along, and had offspring from that union."

From the editorial of the first printing: "Long ago and far away, my idiot sister and idiot self decided to do a fanzine appropriately named 'Babel.' IN a very big hurry we learned a few things about mimeographs, stencils, and oil-based inks and how bent drums leaked. Now we are learning about multilith and 50% reduction of pages and other nifty keen things about running our own fanzine."

From the editorial of the second printing: "A long time ago (was it only 3 years?) my sister and I published a one-shot fanzine called BABEL. (Ha!) At that time we couldn't conceive of selling out a hundred- copy run. But time passed, and then we couldn't even conceive of selling out a five- hundred copy run of an issue. Well, when you're forced to reprint your first 500- copy run, it was a successful issue. With this reprinting BABEL III comes up to 750 copies. Wahoo!... A few items need to be mentioned for BABEL III. N.T. Prize the 1st was usurped by N.T. Prize the 2nd, and then the 3rd in the later issues of BABEL. Whether it was for the better or worse depends upon your sense of humor. Hopefully all of the typos were corrected with this printing, though I am sure that I'll notice a few more the minute I do get the copies back from the printers. Our price has gone up, but not as drastically as our printers, the cost of paper, or postage. And if you are wondering why this issue is so late in being printed, don't ask. Until then as my sister would say, or what also could be considered the war-cry of S.T.A.R. Central: Love long and perspire!" 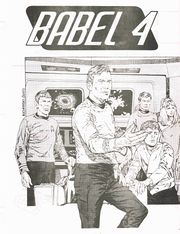 front cover of issue #4, by Mike Kucharski and Terry Austin 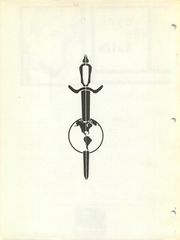 From the editorial of the original issue:

One more time this editor sits down at another borrowed typewriter to write another column for the continuing saga of a one-shot fanzine called BABEL„ That's right. A one-shot fanzine in four volumes, with contents bordering around 600 typewritten pages.

On occasions, the editors have been asked what it takes to publish a fanzine like this one. I usually answer 'insanity' and strong fingers.

On occasion, I have also been asked as to how close to the different conventions fanzine is done. Well, for the New York STAR TREK CON# 2 which is the intended convention of this fanzine (read the details of the con in STAR-BORNE #6 when it comes out if you want to know about the time that we had...)... anyway, with the help of the great god Vaal (one of the names for this here typewriter), and other cosmic blessings, this zine will be collated Wednesday, February 17, and flown to New York City on Thursday. Close, huh? To say that this condition of publishing a fanzine is typical for the editors and their friends is an understatement. To my knowledge, never have any of our merry crew ever managed to get a fanzine done within a reasonable time (such as 24 hours) before we sell the fanzine in a Dealer's Room. In fact, I can remember a con where we were putting a zine together in a hotel room, and then rushing them off to the people who desired them. BABEL has grown indeed. We have gone from praising correction fluid and cursing blue stencils to praising a modern-day 'blessing' called liquid paper and cursing carbon typewriter ribbons that have to be pulled by hand for every single letter typed. I have been known to call it fun. One of the offshoots of all this is that BABEL's staff now includes a couple of editors from other Detroit-based ST fanzines. They didn't start off that way. My twin and I corrupted them. As for BABEL IV... you may notice that the first half of the zine has a smaller print that the rest of the zine. It was done in photo offset, 30% reduction. This means that for every sheet of paper, in reality there is four typed sheets of paper reduced. What all of this means is that this issue is the largest BABEL on record, somewhere around 150 typed or-drawn 8!s"xll" sheets of paper. If the new style of print doesn't work out....well, let us know.

As for the contents of this issue... there is a sensuous Schillian love story by "J" (if that doesn't make you want this zine, nothing will) and another installment story in the epic "Federation and Empire" series by my sister, and all of two script reviews in a fanzine noted for its reviews. Never fear though, BABEL V will be mainly reviews. And of course, N.T. Prize rears its...head...through some new visual means, and a couple of stories or three. And if your memory serves you well, yes, one of them was reprinted from a 1969 science fiction zine called SELDON'S PLAN.

Regarding the 1975 reprint, from the editorial in the reprint:

Greetings. First, I'd like to explain about this reprint. It contains all the material that was found in the 1st printing of BABEL 4, with a few exceptions. The only difference between this printing, and the 1st printing is that the format is different. Originally, only 30% of BABEL 4 was the reduced photo offset. In this printing more than half is reduced - mainly to save space, and as an attempt to keep from raising our prices. There is still almost 150 pages of material here - it's just smaller. As for what is missing from this reprint - the major item is a short story, "STAR TRACKS #3" which the author requested not to be reprinted; a poem by Becca Oroukin was not reprinted mainly because the corresponding artwork to it is no longer available; several minor pieces of artwork which we simply could not find room for in this printing (not any of the good stuff). Also, you may have noticed that we have printed the original columns for both "Cyrl-the-Knife" and "Babel On". Since they were written 2 years ago, they offer a slightly different perspective on what went into the making of this fanzine.

TOC for the original issue:

TOC for the reprint:

Babel 5 contains 88 pages and was published in February 1974.