Sub-Space is a gen Star Trek: TOS anthology. It is a club zine for Sacramento Valley STAR. There were five issues published, as well as one issue that bound them all together.

Sub-Space 1 was published in April 1974 and contains 57 pages. The front cover is by Doug Herring. The interior illos are by Don Corson and M. Mowder.

Sub-Space 3 was published in May 1975 and contains 57 pages. It has interior illos by Don Corson and D. Falloon. 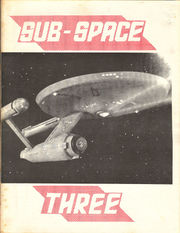 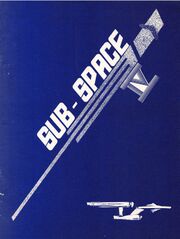 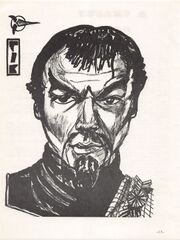 Issue #4 opens with excellent illustrated coverage of the August 1976 Chicago Convention. We are then treated to some superb drama in two different stories. The first, unrelated to the episode "Mirror, Mirror," is called "The Mirror." It considers Kirk's compassion and the true Kirk-Spock relationship. The story presents Vulcan background and a good plot. All in all it is a good story dealing with a time device some what like the one found in "All Our Yesterdays." But, the plot is entirely different. The second drama is a two parter called "The Andromeda Six." It is about beings from a different galaxy, each with a unique power, such as molecular transformation, empathy, immediate translation of all languages, and bilocation. These beings picked up by the Enterprise are shortly afterwards involved onboard as the ship is repeatedly attacked. During one attack Spock is thrown off balance, forcing him to fall down a staircase. Scotty pronounces the still body of Spock to be dead. In the best tradition of movie serials, this story is continued next issue. Subspace also features some imaginative art—sketches of what the Klingon and Federation ships of their future will look like.[1] 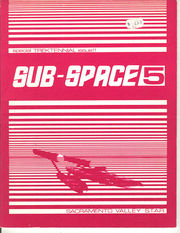 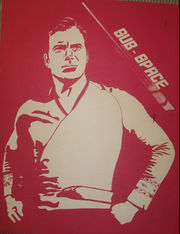 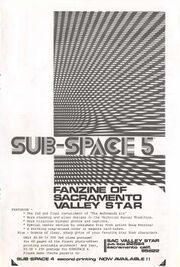 Sub-Space 5 was published in 1976 and has 60 pages. Color covers, black and white interior.

Regarding the puzzles: "The Galaxy's Largest Word Search" by Becky Wong and Karen Zumwalt, and a "Script Search" where you match the clue number to the episode title. Also this issue has a crossword puzzle by Ronald Marler.

Contents (yes, they are listed in the zine in this order):