All About Star Trek Fan Clubs

All About Star Trek Fan Clubs is for-profit magazine, "made by fans for fans." Issues had a barcode, an ISBN, and were sold for $1.

Its content was a fusion of professional boosterism of Star Trek and its actors, and of fandom boosterism.

Despite a somewhat nebulous statement by the editors in the third issue that answered a fan's request to include fanfic and fan poetry,[1] the magazines do not appear to have ever included those things.

It ran for six issues, the first published in 1976.

The rather amateurish - though earnest and enthusiastic - magazine covered Star Trek fandom in all its pre-Internet/home video Seventies forms, with fannish articles on conventions, collectibles, episode trivia, pull-out posters, lots of fan art, interviews with the Trek cast (and prominent "Trekkers!"), fanzine reviews, and, as its clumsy title promised, extensive fan club listings.

It was an interesting magazine, and for a rural science fiction fan without access to conventions or fan clubs, it was a window onto a larger world of Trek (and sci-fi) fandom.[2]

Contains the typical biographical information, a woefully incomplete listing of Star Trek clubs and organizations, and the typical, almost obligatory listing of ST episodes, without any philosophical appraisal. Also, many drawings are used where photos would have been better. Rating 2 stars out of 5 stars. [3]

All About Star Trek Fan Clubs 1

All About Star Trek Fan Clubs 3 was published in June 1977 and contains 68 pages. 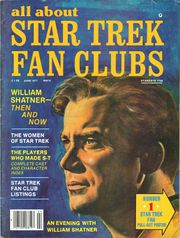 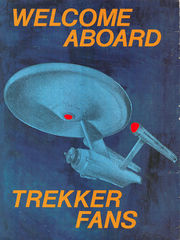 It is online here.

All About Star Trek Fan Clubs 5 was published in October 1977 and contains 50 pages.

It is online here. 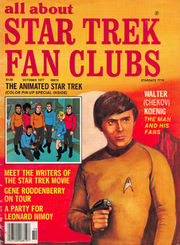 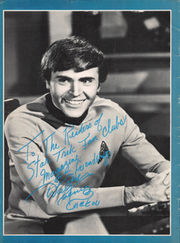 back cover of issue#5

A letter from a fan, unknown gender: "We love the art work in ish #3. Are the iadies as ioveiy as their artwork? Maybe the artists should have fan clubs also." The editor's reply: "Dear Art Lover: We don't really believe that you are a Male Chauvinist Pig. We received many letters praising the art work of fans, and It certainly will be a running feature of our magazine. By the way, to answer your one question very positively, here Is a photo of Connie Faddls with her portrait of McCoy. Yes, Trekker artists such as Connie do have an appreciative following of fans."

All About Star Trek Fan Clubs 6 was published December 1877 and contains 52 pages. It was the last issue. 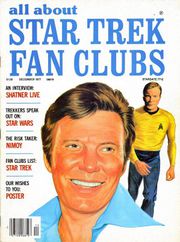 A copy of isue #6 has been uploaded here: All About Star Trek Fan Clubs Issue 6, December 1977 (From Zombos' Closet), Archived version