From Fanlore
(Redirected from Allyson Whitfield)
Jump to: navigation, search 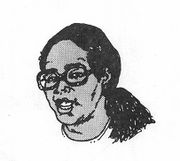 a caricature by Gordon Carleton of Allyson Whitfield, printed in Paladin #1 in 1980

Allyson M.W. Dyar was a zine editor and fanartist primarily in the Star Wars fandom. She was a co-editor of Alderaan with Jeff Johnston from 1978 to 1981, and of Comlink, a review and letterzine, with various co-editors from 1981 to 1994.