For the Voltron zine, see PALADIN.

Paladin is a gen multifandom anthology which preceded The Paladins Affair.

A Submission Request for the Proposed Third Issue

This issue was ultimately not published. 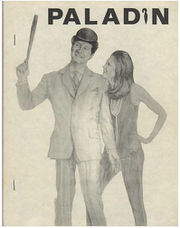 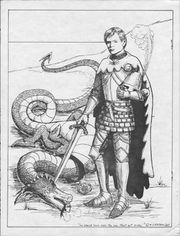 back cover of issue #1, Signe Landon

Paladin 1 was published in 1980 and is 116 pages. Cover art is by Susan Perry-Lewis and back cover by Signe Landon.

David did all the work. Lord knows why I'm on the masthead, unless it was a ploy to get me to send stories (Little did he know —). Basically, anything you like about this zine — variety of universes, editorial policy, arrangement of written material and artwork, typing — you may attribute to David (Take a bow, Dave). Responsibility for anything you don't like we, of course, share equally.

You may notice that "Ash and Mist" : and "Ehez Mortll are the same story. Same pages, too. During a marathon editing session with Kathy, during which all three of us disagreed about most every thing, we came to the conclusion that there were two possible moods and endings to the story she outlined, both excellent. So she did one and I did the other, ran dom is an incestuous business.

Most of the Illya stories in the zine are part of a coherent (?) universe; more will appear in the second issue of Paladin, barring a successful hit team (And even then, I have left manuscripts with my solicitor). Stories to come will have somewhat more Napoleon included.(Napoleon. Remember him?). There will also, hope fully, be a novel in the same series for our third issue (Optimistic, aren't I?). Also in the second issue, we're looking forward to a great Paris-Dana (Mission: Impossible) story from Juanita Salicrup and Jean Stevenson. Also, a Man from U.N.C.L.E./Paper Chase sequel to "Ash and Mist" and "Chez Mort," a long U.N.C.L.E. story, Noel Harrison, "The Pardon Moi . . Affair," by Gordon Carleton (The Pig from U.N.C.L.E.), Doc Savage in drag ...

There's still lots of room left for submissions, though. I prefer spies, but cops are okay too. Submit material. Please. We promise, your superiors at the LAPD, CIA, Surrete, KGB, UNCLE or *ahem* higher agencies will never hear about it from us.

"Echoes through Time" is reprinted from Despatch 30/31, edited by Ruth Berman and Sharon Emily. "Promises and Maple Leaves" is reprinted from The Clipper Trade Ship [1], edited by Jim Rondeau. Both have been rewritten to some extent. I'd rather not reprint material, so please, send stuff?

Eileen may be right about the divvying of work (he says typing this Sam, taking 80 sheets to the printer tomorrow/today, to get back in time to collate Wednesday after Sue Perry and Keven Lewis's wedding so we can take it to Mos' Eastly on Thursday), but she has her uses. Cuts down on the rodent problem with that switchblade, and tumbles world-class. Even purrs on occasion.

If you've ever read a Crystal Singer (plug elsewhere unless I forget), you know I ramble; if not, you'll find out.

PALADIN is mostly dedicated to three of the dear people who died of late — Alfred Hitchcock, David Janssen, and David McDaniel. Thankfully they all left work behind them, for us to show the future what talents they bore.

But it's not entirely dedicated to them. For them our triumphs, but there would be no triumphs without the people who slaved over the bugger.

How can I dedicate a zine without remembering Carol making me layout pads over at Moon's, or Kathy's marathon long distance rewrite sessions with Eileen, or the breakneck speed at which TJ and Signe mailed in artwork (not to mention the twenty-plus pieces Gordon did, from the one he first promised for us), or Brenda, with no interest whatsoever in fandom, pasting-up for hours — for every name on the table of contents I have a story. You're great, guys, I love you all.

Enough with that. PALADIN 2 is coming one of these days. Accepting stuff now — dreaming for a Noreascon II release and hoping for Febcon. Ideally, we'd like PALADIN coming out every six months. Send stuff!

Artists: we are willing to experiment, and occasionally pour money into finer screens, two-color ... although we prefer plain pen-and-ink. Pack things well, with crisscrossed corrugated cardboard and big red letters.

Insure all art and keep a copy of all stories! Your work is valuable.

Don't forget to loc us.

Media fandom rides again. And like the Seventh Cavalry, ‘Paladin’ is a lifesaver. If you too have been starved for a taste of ‘Man from U.N.C.L.E.,’ or ‘M*A*S*H’ or ‘Mod Squad’ or the ‘Wild Wild West,’ not only do you get it in this zine, you enjoy it. It’s been a long time since I’ve seen a zine whose contents are so uniformly good.

Much of the credit, because much of the writing, belongs to Eileen Roy. In four pieces, nominally unconnected but nevertheless covering a whole lift, Eileen, with help from Kathy Esselman, sketches a touching and even sad portrait of Kuryakin. Quite the most satisfying as well as the longest is ‘A Time of Certain Solace,’ in which Illya sees action in the Korean War and runs across this M*A*S*H unit…

In another cross-fertilization of universes, Eileen gives us the meeting of Aaron Stemple of ‘Here Comes the Brides’ and Sarek in ‘Echoes Through Time.’ ‘Promises and Maple Leaves,’ Roy’s ‘Questor Tapes’ piece, is not so lovingly done, but is still competent; if you are able to change anything in the world, who do you help, and how?... Basically a very long short story in structure, Ronnie Sacksteder’s ‘Wild Wild West’ story, ‘Night of the Blind Beggar,’ steals a march on nineteenth century psychiatric [missing word] when Jim Sest regresses to a five-year-old-hysteric, and his arch-antagonist, Dr. Miguel Loveless, is the only one who can help him…A very short piece, but loads of fun, is Carol Lynn’s ‘The Thorne Affair,’ in which Starsky and Hutch unknowingly encounter THRUSH on Playboy Island. It makes sense out of that episode.

Highly recommended for the video freaks and others.

front and back cover of issue #2, Signe Landon

Paladin 2 was published in 1982 and is 124 pages. Front and back wraparound cover art is by Signe Landon