For other fans named Signe see the Signe disambiguation page. 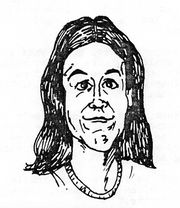 a caricature by Gordon Carleton of Signe Landon, printed in Paladin #1 in 1980

Landon got into fandom in 1972 "through a complicated series of events when she read an article in a newspaper mentioning odd things called 'fanzines.' She wrote the editor, was referred to Associated Press who contacted Gene Roddenberry, who then gave Landon Devra Langsam's address." [1]

She was also the editor of The Holmesian Federation, a Sherlock Holmes/Star Trek: TOS cross-over fanzine anthology. Her artwork was also used in Jacqueline Lichtenberg's original series Ambrov Zeor - the logo on the cover of each issue after issue #3 was Signe Landon's design which won the logo contest.[2]

Signe's artwork also inspired others. One fan, Joan Verba, wrote: "One of the major reasons I bought the Gateway fanzine was its artwork. Signe Landon contributed a Kirk, Spock, and McCoy piece called "Strange Visitors." This was the first piece of artwork that inspired me to write a story — before this, all I could write in response to artwork was nonfiction analysis. [3] "[4].

There was also a mischievous side: "At Equicon, Eileen Roy and Signe Landon got an idea for a parody of Kraith Collected, and with the help of other fans put together a small (13 paged) photocopied booklet called Krait-Spock's Anthropods. As a take-off on Kraith's numbering system (examples: IIa, IIIb), the number of this installment was the symbol for infinity."[5].

In 1981, Signe Landon was nominated for a FanQ award and submitted the following bio to The Annual Fan Q Awards Nominations Booklet:

"Signe Landon has been in fandom quite a while, since '73, she thinks. She started out in ST fandom, as an artist and film clip trader, and after a while dropped clip trading and took up zine editing, filksong writing, and occasional story-writing. In more recent years her interests, have expanded to include SW, S&H, Sherlock Holmes, Darkover, general media fandom, etc., and from the beginning, sf has been a major interest. In the last year or so she's been trying to refine her work, and has been concentrating more on sf and fantasy subjects. She's also taken up stained glass, which unfortunately can't be reproduced in zines. She's edited THE OTHER SIDE OF PARADISE 1 through 3 and THE HOLMESIAN FEDERATION 1 and 2, and has won numerous art show awards at assorted conventions. She is nominated for Favorite Single Artwork."