Sins of the Father (Starsky and Hutch zine) 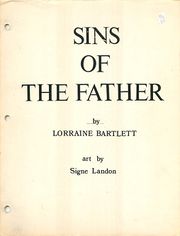 Sins of the Father is a gen Starsky and Hutch 71-page novel by Lorraine Bartlett. The art is by Signe Landon.

"A case of mistaken identity means trouble for Starsky and Hutch as someone from Starsky's father's past catches up to him to take his revenge." [1]

"A classic h/c zine in which the sins of Starsky's father are visited upon the son when Starsky is kidnapped and tortured. Can Hutch rescue his partner from the clutches of this madman before time runs out?" [2]

It was about a year ago when The Pits volume 1 had just sold out, and its editor, Melanie R, declared there would be no reprint, that my good friend, [name redacted], suggested I tackle a reprint of my story from that issue. At first, I thought she was crazy, but then I heard from a number of people who'd missed out on 'The Pits' and were hungry for more S&H to read. This has been the result.

Samples of the Art

Gruesome thriller about a madman's quest for revenge on Starsky. After he's order to bed (suffering from a severe ear infection with symptoms including dizziness and nausea), Starsky is surprised in his apartment by Nick Costanos. Nick thinks Starsky is his father, Michael Starsky, and holds him responsible for the death of his beloved sister years ago. She died from a back-alley abortion, and Nick believes the elder Officer Starsky was the father. Before he can execute Starsky, he has to get him to admit that he indeed was responsible. Despite some severe torture, compounded by severe illness, Starsky doesn't give him what he wants. He lasts through the night, but a new card is thrown into the game when Hutch shows up to check on him in the morning and is taken captive, too. Now Nick has an extra bargaining chip to try to convince Starsky to say what he wants. Severe h/c with some good quiet moments, too.... But be forewarned, the torture is severe and graphic, and there isn't much comfort go balance it. Many fans do not care for this novella because of its sadism and unsatisfying wrap-up. [3]