Black Bean Soup is a gen Starsky and Hutch newsletter and letterzine published between 1995-2000.

The zine contained news, fannish discussion, articles about the show and actors, a trading section and a limited amount of fan fiction. It existed in both online and offline space. The print versions were eight pages in length. 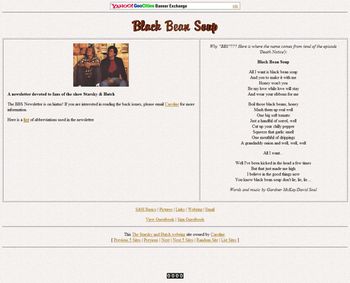 This was a traditional newsletter, not unlike Livejournal-type newsletter communities; it contained articles, information, chatty commentary, etc., and was emailed out to its subscribers once a week. People who did not have access to email could still pay to have the newsletter printed out and mailed to them.

Like many things of the day, the welcome letter included not just information about the newsletter itself, but about internet-related things; it was assumed (often rightly) that people would be new to computers and the internet:

Welcome to Black Bean Soup! (BBS, as opposed to bbs or bulletin boards) Black Bean Soup is an online newsletter for fans of the show Starsky & Hutch. It is issued weekly (on Sundays) and contains articles, new, bios of some of our members, trivia quizzes, inside info from Dean Treadway at TNT (which currently has the rights to the show in the U.S.), and a trading post section where folks can buy/sell/ask for copies of things. Right now we are up to (volume number) so there are a lot of back issues which you may get if you want. Back issues also include an episode guide for the series, credit lists for the stars, addresses of stores/shops where you can buy pictures and/or S&H collectibles and fanfic (fiction based on the series, written by fans). [...] if you want all the back issues, let me know. There is a "Band of Friends" who will send you the back issues, should you want them.

At some point BBS added: a webpage. The public links on the site included a page explaining the abbreviations used in the newsletter, a page explaining some S&H basics, a page of pictures, and links to other S&H sites. A private page, whose URL was given out only to subscribers, included the newsletter's archives, with every back issue available for download, as well as transcripts of many of the group's online chats. Unfortunately the website vanished during Yahoo's purge of Geocities sites, and only the front page and the episode guide was archived by the Wayback Machine.

Many of the members of this community were militantly gen and sometimes het fans. What they were not, at least in this venue, were slash fans. Many of the community's leaders and BNFs were very outspoken in their anti-slash stances.

One example: see GARBAGE LIKE THAT HAS NO PLACE IN FANDOM (1996).

Fans would have been familiar with "Black Bean Soup" as it was the name of the song Hutch sings in the episode "Death Notice." See it here.

"Why I Do Black Bean Soup"

Hopefully, it's informative and entertaining and there's no purpose other than that, other than to provide a 'meeting place' where fans can get to know other fans and hopefully become friends. I don't really expect anything from those who get it although it is nice to get feedback occasionally... and the courtesy of a quick note to let me know if you're dropping your online services/your sub to the newsletter... If I only had a nickel for every time I've heard someone say, 'I thought I was the only "adult" that still loved Starsky & Hutch...!' I'd be a millionaire today. LOL. The extra bonus is that, through BBS, a lot of folks have not only found out about S&H fandom but about fandom in general...BBS is something of which I'm extremely proud -- I've put a lot of time into this because I love S&H and the friendship portrayed by the two main characters, because I've found some of the same kind of friendship with a lot of the BBSers I've met online and in person over the last two years, and because I've always enjoyed fandom in general. I've gotten a lot out of fandom from other editors over the years and hopefully, this is my way of giving something back.

The End of the Run

By the end of 1999, the fandom had largely moved on to other, more real-time venues like mailing lists, and BBS's final issue was December 1999/January 2000:

The end of a year, decade, century, millennium ... and the run of BBS. Life goes on and lots of S&H talk lists have developed, providing immediate gratification for those who are still heavily into this show. Unfortunately, input has dwindled to almost nothing [...] Well, it's been a great run. I'm thrilled that this E-newsletter went from 10-15 AOL subscribers to well over 300 worldwide during its five-year run. We've had members from the U.S., Canada, Brazil, Argentina, Egypt, Japan, Australia, New Zealand, Italy, Germany, The Netherlands, England, Scotland, Cornwall, Ireland, Northern Ireland, France, and Switzerland! I think many of us have made a lot of friends through this medium and it just goes to prove that, while you do need to maintain some sense of caution when corresponding via the Internet, it's also a great way to meet folks from all over the world and hopefully bring us closer together through a shared interest.

sample of a print edition

This is a archived link to the site's Guestbook.